My five-hundredth post approacheth — a reread and re-evaluation of The Fourth Door (1987), the debut novel of M. Paul Halter, of whom I am quite the fan — and so Tuesdays in February will focus on the six translated Halter stories featured in Ellery Queen Mystery Magazine that have yet to be collected into a second English-language anthology.

Halter’s short story game is pretty hot — The Night of the Wolf (2006) contains at least a couple of the finest impossible crime short stories I’ve encountered, and recent efforts like ‘The Yellow Book’ (2017) highlight Halter’s ability to still pose and resolve interesting questions about what is possible and how it may be achieved.  And so, well, let’s get into it…

The earliest of these six is ‘Nausicaa’s Ball’ (2004), first published in English in EQMM’s September/October 2008 issue and reading — perhaps appropriately, but we’ll get to that — like the sort of setup you’d find in Agatha Christie.  On holiday in Corfu, Alan Twist finds himself sharing his hotel with an old compadre from the police as well as the movie star Rachel Syms and her various satellites: husband George Portman, co-star Anthony Shape with whom an affair is rumoured, Sharpe’s girlfriend Maggie Lester.  In short, an Eternal Triangle.  And what do you usually find in the middle of such a triangle?  Why, murder, of course, and this one shall be no different: an argument between Rachel and George on the secluded beach that can only be reached by descending a narrow staircase down the thirty-metre cliffs surrounding it on three sides will see Rachel return in a trembling state and Anthony descend to confront George and return five minutes later having “found” him beaten over the head.

It’s not an impossible crime so much as a confounding one, with each of Anthony and Rachel each insisting they’re innocent even as evidence of a murder weapon and, later, witnesses stacks up around them.  Just before the reveal of the solution I had a moment of clarity that was beautiful in its completeness…and then I remembered that such a solution is already pretty well-known and Halter has a bit more credibility than that.  His solution…well it requires some split-second timing to fit into the timetable given and there’s one element — again, with shades of Agatha Christie, and one of the weakest aspects in one of her best second-tier novels — which seems a little unbelievable in terms of a) what must be accomplished and b) the fact that no-one would see anything.  But it’s a fun way to build up suspicion against an innocent person, and utilises some solid if unlikely ingenuity to get where it wants to go.

Fascinatingly — and as far as I’m aware this is a legit internet exclusive, get me — it’s appropriately like an Agatha Christie story because John Pugmire tells me it was originally written with Miss Marple as the sleuth before copyright issues reared their head.  I’ve no idea if it was published in French with Aunt Jane as the sleuth — anyone? — but surely someone would have mentioned this before now if that was the case.  And if you replace Alan Twist’s cold-eyed logic with Jane Marple’s woolly thrills at the peccadilloes in human nature it makes a helluva lot of sense.  As a first foray into the realms of pastiche (well, okay, second, since Halter’s first novel featured Gideon Fell as the detective…and again had to be changed before publication) it’s enticing to think what Halter could do with this property if given the chance.  Hint, hint…

‘The Robber’s Grave’ (2007) preceded ‘Nausicaa’s Ball’ in EQMM, published as it was in the June 2007 issue, but I’m going with the original chronology and not the English-language one.  Here we have a framing familiar from the likes of ‘The Dead Dance at Night’ and ‘The Call of the Lorelei’ from The Night of the Wolf: namely, Alan Twist turns up somewhere, someone tells him a story of apparent impossible happenings, and he lays the mystery to rest while imbibing alcohol.  This time around its confrères Rene Baron, Charles Bilenksi, and Mike Felder, the first the barman and the others regular barflies at The Two Crowns inn somewhere in rural Wales.  Having passed a field with a lone monument at its centre, and evidently struggling for topics of conversation, Twist mentions this to the trio and is told that the monument was placed there to cover up the grave of a wrongly-executed man where the grass simply refuses to grow.  Twist is, naturally, sceptical:

‘It seems to me that I saw a wide green field back there.’

‘All around it, yes,’ replied Mike Felder, a forty-year old of military bearing and frank expression. ‘But at that particular spot, no. That’s why we laid that stone, so that nobody would notice the bare patch.’

‘I don’t understand…Are you telling me the grass doesn’t grow only on those few square feet?’

‘Absurd. Quite so, but it’s nevertheless true. Everyone around here knows it. The grass stopped growing in that particular spot more than a hundred years ago. And it’s stayed that way despite several attempts to remedy the situation.’

That’s it: no ghostly sightings, no incomprehensible murder, no miraculous vanishings (unless you count chlorophyll); it’s a minor problem — and one spun from real life thread, it seems — but pleasing in its obscurity.  There’s something of Wile E. Coyote in the landowner’s increasingly desperate attempts to secure the site and make the grass grow, and to a certain extent you can simply see this aspect of it being what appealed to Halter’s mind.  How many ways can you protect a patch of grass?!  Interesting, too, to see several methods discussed and their flaws laid out on the way to the final solution; they’re not false solutions as such, but there’s quite a lot of meat on the bones of this 5,000-word tale.

The motive for what is eventually untangled is sort of delightful, and the human angle of the people involved captured very piquantly — sure, that element is not exactly rich in subtlety and verisimilitude, but for an author whose characters come under fire in his longer works there’s a good sense of those involved here.  A decent piece of clewing is on hand, too, though it’s a little bit of a shame that Twist’s final tumbling to the explanation is scant more than “Well, I did something of the like myself once…”.  However, I can’t deny that if this was the first Halter you read you’d want to know what other unconventional puzzles he’d turned his mind to.  Come back next week to find out! 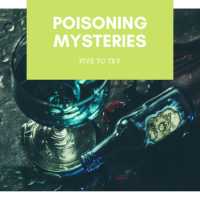