“I am going to kill a man” — it must surely be the most famous opening line in the whole firmament of Golden Age detective fiction, and but for Sherlock Holmes and “the” woman I’d suggest the famousest opening line in all detection ever.  When Aidan at Mysteries Ahoy! and I realised we were reading this near-contemporaneously, he kindly agreed to delay his review by a week that we might publish our thoughts as simultaneously as possible — I’ve not read his review as I write this, but I will by the time you’re reading it, and I am fascinated to find out how successfully he feels the game is played after that wonderful opening serve.

The intended victim is the driver whose car struck down Frank Cairnes’ 8 year-old son Martin some six month previously, and the opening section of this novel takes the form of Cairnes’ diary as he tracks down the guilty party.  While a certain amount of convenience comes into play, the secret double life Cairnes leads as best-selling crime writer Felix Lane also comes in handy: not only does he get to reason this through as if it were a plot of a novel he was writing, he’s able to use the excuse of research to inveigle his way into the lives of those he eventually determines to be guilty of the crime.  As a first-person look at grief and the madness a man is driven to this is both quietly brilliant — witness the cupboard of toys his housekeeper was unable to bring herself to throw away providing “a better memorial than the tombstone in the village, they will not let me sleep, they are going to be the death of someone” — and seemingly incapable of stumbling over some frankly bewildering moments:

Because, yes, ‘dispassionate’ is absolutely the word a man so overcome with grief that he’s systematically stalked his son’s killer for several months would use to describe the sensation of fatherhood.  Additionally, the thread comprising repeated vandalisation of Cairnes’ flowerbeds and the receipt of some spiteful anonymous letters feels like something dropped in from Margaret Millar’s line of domestic suspense and goes precisely nowhere.  Still, there’s a delightfully inverted thinking in some of this opening — “Can I succeed where the whole police organisation has failed?” he despairs at one point, making Cairnes about as anti-Crofts as it’s possible to be — and the categorisation of Sardines as a “singularly erotic game” gives one plenty to think about.

At about a third of the way through, this epistolary narrative is abandoned for a general third-person sweep, the halfway stage gives us the body, and then Nigel Strangeways swoops in to investigate.  While Blake’s narrative talents are undeniably on form here — “Outside the window lay the precise and classical dignity of one of the few 17th-century London squares not yet delivered over to unnecessary luxury shops and portentous blocks of flats for the mistresses of millionaires” — his opening salvo with Strangeways writing an intellectually ‘hilarious’ general knowledge quiz is pompous and awful.  Did this old-school-tie snobbishness ever go over well?  It’s shit like this that does these books no favours.  And this also marks the point at which an incisively different take on the GAD plot sighs, gives up, and lapses into conventions that show up as a retrograde step against the savagery and invention of the earlier sections.

It’s Strangeways who pumps all the enjoyment out of the book, apparently raddled and exhausted following a recent case — because, y’know, he’s such a champion of justice and people — yet self-satisfied enough to loudly declare in the local bar as a group of fisherman sit nearby that “A fishing-rod [is] a stick with a hook at one end and a fool at the other”.  All around him Blake is working extra hard to make the people and the situation compelling — the relationship between young Phil Rattery and Cairnes/Lane proving especially effective, and some beautiful descriptions made with a poet’s insight, such as the following mid-speech change which brings with it a host of horrors on the topic of domestic abuse and the pressures people are subjected to out of sight:

[Her] voice was like the edge of a rusty, jagged blade: then it grew sweet and patient, a horrible change…

— and then Nigel comes swanning in with public school spirit and arrogant bonhomie and you feel everyone cringe away with a roll of the eyes and a collective ‘Oh, great, here’s this arsehole again’.  And it’s especially vexing since we’re supposed to be blown away by his largesse at taking on another case so soon…yet the apparent pains he’s under to get to the truth suddenly come out of nowhere.  At the end, declare him a ruined and broken man who needs another break to recover, you feel like he’s surely putting it on; he, after all, is not the one whose life has been turned upside-down, yet he’s the diva swanning around and demanding everyone look at him and how difficult he‘s finding it all.  And this has always been my difficulty with Blake: he thinks Strangeways a far more charismatic character than he proves to be, dragging even the most promising plots and situations into the doldrums that we all might sit there with the sails up and nothing happening for 30 pages of Classical allusion and redbrick snobbery.  The singularly myopic sentiment that resulted in no-one ever telling Cecil Day-Lewis what a gargantuan bell-end of a detective he’d created has created reams of potentially-wonderful detective fiction left flagging and dragging come the close.  Not the legacy some of his plots deserve, but the one they have in my eyes. 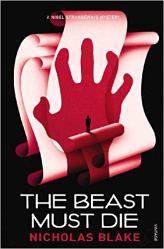 Case in point, the ending here is pretty smart, and another example of the sort of situation that GAD was able to manufacture to potentially devastating effect.  But 24 hours after finishing this I could not remember what comeuppance our guilty party faced — did they get away, were they arrested…what actually happened?  To not have Nigel’s chinless face gurning at me and quoting from the Aeneid was simply all I needed, though arguably not what Blake was going for.  I’ve certainly come to appreciate Blake’s writing more, as it’s been a number of years since I’ve picked up anything by him, but I think Strangeways will always rub me up the wrong way.  Such a brilliant start deserves more than to be mired in such unimaginatively traditional trappings come the latter stages; with a little more invention and bravery behind it this could have been something very special indeed.

Kate @ CrossExaminingCrime: The way the structure of the story metamorphoses over the course of the book appeals to me and the diary element is used exceptionally well. As a piece of evidence it reveals the truth in such a way that you can’t initially see it, (there is after all one highly significant literary allusion whose significance only dawned on me at the end), and of course by having the first third of the story given to us in this way with no alternative sources means that a number of assumptions are naturally built up within us, which are not then so easily dismantled when the narration changes.

Aidan @ Mysteries Ahoy!: The detective phase of the novel is also handled extremely well and here, once again, Blake’s careful development of the novel’s structure pays off. Nigel’s introduction into the story is handled smoothly and feels at least reasonably credible. Because he already knows Cairnes and we have already become familiar with the other suspects we are able to get quickly stuck into the case. The investigation is perhaps not the most dynamic or surprising I have read. Characters’ motivations are clear from the outset and there are few really surprising moments. The interest lies in exploring characters’ psychology and relationships, both of which Blake does extremely well. 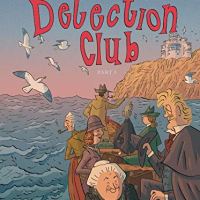