A triptych of needs are being met here: firstly a last-minute replacement for the Modern Locked Room Mystery for TomCat I’d intended to write about, secondly the addressing of a Paul Halter book not yet reviewed on this blog, and thirdly some tangential research for next Saturday’s In GAD We Trust episode.

I’ve never made any secret of my admiration for The Invisible Circle (1996, tr. 2014) with its wild fusion of Arthurian legend, And Then There Were None (1939) by Agatha Christie, and The Plague Court Murders (1934) by Carter Dickson.  I remembered it as a heady, headlong rush of wild improbability and glorious impossible murder that’s clearly out to have as much fun as possible with the various hoary trappings the Golden Age found a plethora of ways to rejuvenate — disfigured corpses!, long-lost relatives!, hints of the eldritch!, disputed identity! — and all the more impressive for having such light and joyous fun with these conventions some five decades after the Golden Age was packed up, patted on the head, and told to leave the adults alone so that they could write Serious Crime Fiction.

Rereading it, then, was a risky business.  I’ve revisited a variety of books for this blog, and while I’ve enjoyed some at their second tour as much as, if not more than, the first time around — Erle Stanley Gardner’s Doug Selby novels being the most recent example of that — others like The Mystery of the Yellow Room (1907) by Gaston Leroux have found enthusiastic memory met with a slightly cold-shouldered modern reality.  Perhaps more so than any of Halter’s other books so far translated by John Pugmire, The Invisible Circle hinges on one key reveal that many people will tell you wouldn’t work, the revelation of which undoes all the intrigue and suspense built along the way.  So maybe I should have left this one alone, and opted for more certain ground by rereading The Tiger’s Head (1991, tr. 2013) or the overstuffed-but-ingenious The Demon of Dartmoor (1993, tr. 2012).

Oh, ye of little faith.  A second reading of The Invisible Circle has, if anything, only increased the regard I hold this book in, with the added perspective on the construction Halter brings to his murderous spree in an isolated castle showing it up as the borderline masterpiece it is.  The games of suspicion, the superb weaving of background mythology to inform and allow everything that occurs, and the subtle placing of hints, clues, indications, and outright in-your-face manipulations is glorious to watch knowing how they feed into the overall scheme.  Is it realistic?  No, of course not.  Is it trying to be realistic?  Well, only to the extent that all detective fiction is: it exists in our Newtonian universe of gravity and human motivation, and the rules of murder and the physically possible are the same here as they are for the reader who sits down to read it, but if you’re reading GAD-styled impossible crime fiction because you want a dose of strict realism…

“If characters don’t act exactly as I would in that situation, I burn the book and spit on the ashes.”

The setup here sees seven people invited to Cornwall to the castle home of Gerry Pearson.  He promises them an “extraordinary event” and, because it’s 1936, people take him at his word and actually turn up.  The castle itself is situated on an archipelago connected to the mainland by — uh-oh — a single rickety bridge which will definitely remain in place for the duration of the narrative, and when everyone arrives Gerry Pearson tells them that he’s going to be murdered that evening and one of those people here present will be his killer.  He even tells them which one will kill him, and how they’ve already arranged the perfect alibi so that no suspicion can possibly fall on them, and then he arranges to be incarcerated in a room at the top of the castle’s tower: a room overlooking the wild ocean, with a grating on the window that cannot be moved and which no object of more than a few inches across could pass through, and with a door sealed not by mere locks and bolts — which the impossible crime has been hocussing with string, magnets, blocks of ice, and whatever else you’d care to name for decades by this point — but by melted wax seals that his guests are encouraged to mark in any unique way they like to ensure the sanctity of the fastening.

Anyone expecting strict realism, then, will be shocked — shocked! — when an hour later Gerry Pearson is found stabbed in the back in this room, the seals on the door still in place and unmolested, and the sword which killed him an impossible presence for two reasons which I’ll leave for you to discover.  Suffice to say, the room had been searched before the door was sealed, and there’s no sign of his killer once the door is opened…so howdunnit?  And, of course, we add to this a few elements that are best experienced through the narrative itself, including the nature of the Arthurian legends mentioned above and the lengths the killer seems to have gone to in order to raise the question of whether the body in the room is indeed that of the man who was locked in the room in the first place (this is surely, surely, a nod to Halter’s debut The Fourth Door (1987, tr. 1999) wherein a man is sealed in a room in much the same way and then, an hour later, the seal broken and room opened to reveal the corpse of an entirely different man).

What makes this such a wild time on top of the breathless pace and delightfully evocative scene-setting is how quickly the layers of games then unfurl: the person Pearson named as his killer of course has a perfect alibi, immediately splitting the group along the lines of those who believe their innocence and those who don’t, and the sheer amount of history within the group begins to over-layer and thus complicate things further: among those present are Pearson’s ex-fiancée and the man who has loved her for 20 years, his adoptive niece plagued by vaguely unsettling memories of visiting the island as a young girl over a decade previously, and a respected psychiatrist against whom Pearson makes a quite slanderous accusation…in short, as Pearson points out, even if the group is able to ascertain that his indicated party isn’t the killer, there is no shortage of people who’d only too happily step into the role.

“Well, that’s not very realistic — surely he’d invite someone who liked him and would keep an eye out.”

And then, then things get really wild.

Rumours of a long hushed-up brother surface (“…I never saw him, but I was told they resembled each other closely…”), two policemen arrive — apparently having been forewarned of a murder that was due to take place — and bring their own revelation to up-end proceedings, and the murders begin to multiply as a ghostly knight may or may not be coming and going at will and killing off anyone who gets too close.  In short, the kitchen sink comes out and most of what’s underneath gets thrown in for good measure…and yet, when you know where this is going, to see the tight hand Halter keeps on his characters and events is magnificent.

GAD-inspired detective fiction has never been a hotbed of rich character insight — you want subtlety, read Dickens — but the way various characters control information and others seem to obfuscate it is ingeniously handled.  Our psychiatrist Dr. Charles Jerrold is, in many ways, a prime example of what Noah Stewart called the SEP gambit with his tedious dry way of volubly holding forth on any point he’s allowed to build up steam on (witness the lovely moment someone cuts across him as he’s warming up), and the roles played by the likes of Madge Pearson — the niece — and her fiancé Bill Page, an unexpected element in Pearson’s plan having attended with Madge sans invite, in unpicking the various misdirections and false information is perfectly balanced.  Even the vanity of Ursula Brown is used to justify part of the key element of misdirection, and local poet Gail Blake might not serve much narrative purpose beyond see-sawing incredulity and anger, but he at least brings the character of their discomfiting surroundings to life:

“[L]ook at the jagged coastline, the craggy rocks and that wild sea. They translate into a proud, independent and inflexible character.

“Now imagine the night of a storm, one much more violent than last night’s.  Listen to the roar of the ocean; look at the waves arching their monstrous backs; imagine liquid mountains which melt; hear the storm growl, its yataghans of fire cleaving the racing clouds.  Can you hear the howls of the tempest, like hungry wolves?”

Indeed, there seems to be little point isolating your cast somewhere without making the confinement felt, and Halter’s invoking of King Arthur’s final days, which found that legendary figure  “very embittered, in fact, after so much treachery. A sad end for such a noble individual, with wars as murderous as they were pointless having killed so many of his faithful subjects”, is a summarily pessimistic note on which to start the proceedings at the castle which then accelerate to “a contagious fear” as events spiral out of control and leave all present with “a close, almost palpable, danger…as elusive and invisible as a breath of air”.

“Well, I don’t understand why everyone didn’t just leave, then.”

All of these ingredients are part of the flavour that pays off with the revelation which seems to cause derision among this book’s nay-sayers.  And, I dunno — it seems to me that to cavil at that point having gladly swallowed every other delicious mouthful Halter serves is to wilfully manufacture complaints in the face of a sustained piece of majestic writing and plotting.  Is it ridiculous?  Yes, superbly.  Is it any more ridiculous than the majority of what has gone before?  No, not by a long chalk.  Indeed, when you see that whiplash speed with which events are piled on top of each other in these scrupulously-designed highly disorienting circumstances, I’d suggest that a second reading makes it all more plausible simply because of how unlikely it is.  But others, I’m sure, will disagree below.

In many ways, The Invisible Circle plays to Halter’s best strengths — detection has never been his strong suit and so the revelation of the ploy here is monologued in the grand tradition of Edwardian Villains of History, the fictional setting (inspired by St. Michael’s Mount, do we think?) means that he can play with mood more easily by not having to describe surroundings too minutely, and events are piled upon each other with a deftness and velocity that keeps the pages turning at too fast a rate for any objections to really register until it all finally pauses for breath in the last straight…and even then, my reaction on first reading this was to laugh out loud and tear through the final few pages.  You may disagree, and I feel a bit sorry for anyone who wants to split hairs over this since they obviously failed to get caught up in the buffet of insanity that Halter has laid out.  Nothing will convince me that this book isn’t a marvel, and in these uncertain times it was a complete joy to lose myself in the experience of revisiting Tincastle one more time.

Paul Halter reviews on The Invisible Event; all translations by John Pugmire unless stated:

Individual short stories, now collected in the anthology The Helm of Hades (2019) 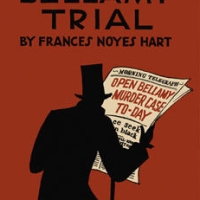