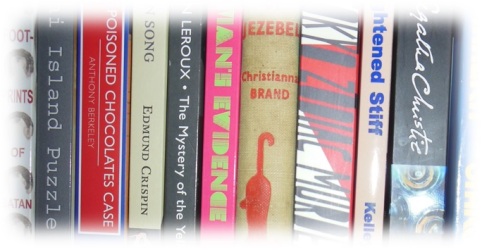 You suggested the titles, you voted, and now here we are: these are the top ten novels demonstrating fair-play in detective fiction as selected by nearly 500 votes on 40 titles.  Except there are twelve of them, because we had a few ties.  So, alphabetically by author we have…

Only recently translated, this has accrued much kudos for the wonderful piece of extended ratiocination that resolves two murders on an island by starting from a throughly incongruous place and then taking you through all the other little details that have been dropped along the way.  Technically the ‘treasure hunt’ Moai statue puzzle is fair, too, but anyone who says they solved that by the clues given is a bloody liar.  If we see no other Arisugawa in English, at least we got this one utter wonder to remember him by. [Currently available in print and ebook from Locked Room International]

An argument could be made that, due to the multiple solutions, this technically isn’t fair-play, but since each solution is overturned by evidence readily available (well, okay, all but one of them…) I’d wager that this is indeed the very essence of fair play by considering the ramifications of everything we’ve been told.  A luscious treat for the epicure, but told with such wit and vigour that everyone can get so, so much out of it.  A masterpiece, recently reissued in a wonderful edition, and I’m delighted to see it on this final list. [Currently available in print and ebook from The British Library]

I distinctly remember this wartime hospital-set thrillerish undertaking being very light on actual clues, with the entire point being that pretty much anyone coulda dunnit and just one or two subtle hints provided before the killer was picked out of a hat.  A lot of you disagree, though, since this garnered the second-most number of votes, so either I’m wrong or you’re all delusional; take your pick.  I’d say I’ll reread it, but I’m saying that about seemingly everything these days, so instead I’ll just trust you. [Currently available in ebook from Mysterious Press]

The shooting of Charles Grimaud by a man who vanishes from a locked and watched room leaving no footprints in the snow outside, and a second shooting of another man in similar circumstances, is one of the genre milestones, and has a lot of fans.  There’s one big element of this I can see people having a problem with, but it might be worth a reread to see how it all stacks up.  I don’t think anyone would argue that this is audacity personified in certain regards, though, so now count the number of people who disagree with that in the comments… [Currently available in print and ebook from Orion]

John Dickson Carr The Problem of the Green Capsule (1939)

A straightforward poisoning in which four people watching a performance witness a disguised figure enter and poison the performer.  Then it turns out these witnesses can’t agree on precisely what happened even in minor regards.  Then it turns out one of them must have been the poisoner even though that’s impossible.  One of the clue subversions here might be the most brilliant fair-play conceits ever employed, and it’s easily one of my top ten detective novels of all time.  Carr in full flight, packed with incident and heavy on clues, this is the genre in all its pomp and brilliance. [Currently OOP]

The only book on this list I’ve not read, so I cannot comment either way on its content or fairness.  As popular as The Hollow Man, though, so either people are being equally forgiving of the potential flaws in this or it really does stand shoulder-to-shoulder with some of the finest of Carr’s work.  It’s actually great to get something a little less-heralded a bit of attention, and hopefully this elevation will see a few more people track it down and learn its secrets.  Certainly I’ll advance it up my TBR as a result of its strong showing in this poll, so expect a review sometime around 2023.  [Currently available in ebook from Orion]

Being the best-selling detective fiction author of all time will inevitably score you votes on such a poll as this, but I can’t argue with the inclusion of this delightfully twisted who’s-trying-to-have-dunnit — it contains some of the clearest and yet most brilliantly hidden clues of Christie’s not inconsiderable catalogue.  From the end of the first chapter you’re immediately on the lookout for anything, and Christie toys with you like the pro she was.  Weird that the table of contents kinda gives it away if you think about it for too long, then… Perhaps skip that if you’ve not read this yet. [Currently available in print and ebook from HarperCollins]

Agatha Christie Death on the Nile (1937)

Voted the World’s Favourite Agatha Christie Novel, I may have my reservations about the use of the clues here, but there’s no argument that’s there’s an abundance of relevant information laid out for you, and that the mystery can be traced through the pointers given.  Despite rereading it recently I’m still not 100% convinced, but as with Green for Danger I’m going to trust the discerning people who picked it.  Proof if nothing else that this list isn’t just me picking my own favourites and ignoring the popular voice…man of the people that I am.  [Currently available in print and ebook from HarperCollins]

Agatha Christie Evil Under the Sun (1941)

A personal favourite of mine, this, and with so much ornamentation in its rococo plotting and clewing that it positively brims over with marvellous brilliance at every turn.  Fine, if you’ve read too much mystery fiction then elements of it probably stick out like a sore thumb, but then what sort of person thinks there’s such a thing as “too much mystery fiction”?  Christie at her most playful and obtruse-yet-baroque, a combination we really didn’t get nearly enough of.  And if you love this then John Dickson Carr will also hold many joys for you. [Currently available in print and ebook from HarperCollins]

Agatha Christie A Murder is Announced (1950)

So scrupulously fair in its clewing that there’s a key moment which manages to tip the entire gaff — which is a shame, since this (frequently mentioned as the best Miss Marple novel) has the complexity of Papa Poirot and the gentle air of menace that Aunt Jane so excellent in dispelling.  A borderline classic, easily one of the best hooks Christie ever wrote, and with an agonisingly cold heart at its centre.  The next time someone dismisses GAD as exclusively ‘cozy’ nonsense, slap them with a copy of this and then force them to read it until they apologise. [Currently available in print and ebook from HarperCollins]

Any doubts about The Poisoned Chocolates Case above can surely be dismissed with the inclusion of this, which does the same thing with a finer focus on a smaller set of results.  Labours the importance of every clue note perfectly, and resounds with gasps and slapped foreheads come the close.  If your peregrinations among classic detective fiction haven’t brought you here yet, you have a treat ahead of you.  Scored the most votes of anything in the poll, by a considerable distance — it’s that highly regarded, and I find it difficult to disagree.  A masterpiece. [Currently available in ebook from Mysterious Press]

I could not be more delighted to find this previously extremely scarce title not just on this list but also beating several others here in terms of votes.  The moment that tips Algy Lawrence to the identity of the killer is extremely well shown and hidden, and the domino effect of that through all the other clues and occurrences to that point is delightful to watch.  Unjustly forgotten for many years, this plays a perfect hand and waves hint after clue after pointer at you.  Makes me all warm inside to see others appreciating it as much as I do.   [Currently available in print and ebook, both individually and as part of the Derek Smith Omnibus with the equaly superb Come to Paddington Fair, from Locked Room International]