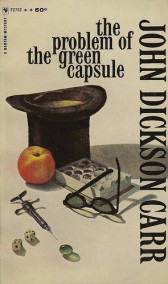 Marcus Chesney doesn’t have much faith in human observation.  To prove his point, he arranges to put on a short demonstration for three witnesses, after which he will ask them questions about what they saw – secure in the knowledge, he says, that they’ll get the answers wrong.  The demonstration goes ahead, as part of which a disguised figure enters the room…and poisons Chesney in front of everyone before vanishing.  It swiftly becomes apparent that the murderer must not only be responsible for a spate of recent poisonings in the village but must also have somehow been one of only four people.  The only problems are that one of them has a rock-solid alibi and the other three were all watching the performance…

Into the aftermath of this sweeps Detective Inspector Andrew Elliot, protegé of Carr’s usual go-to policeman David Hadley, and struggling with his own moderately-compromised perspective on the crimes.  He has three excellent witnesses who were all in prime position to see what went on and so are able to tell him exactly what has happened…and their recall of almost every key detail differs.  All he has to do is somehow untangle this mess to catch not just Chesney’s murderer but also the person responsible for the previous crimes.  Thankfully, a certain Dr. Gideon Fell is holidaying nearby and has some time on his hands.

The Problem of the Green Capsule is one of the books that really highlights how lucky we were to have John Dickson Carr.  Plenty of poor plots have been told in marvellous prose, and vice versa, but Carr excelled at every single angle: take away the superlative writing, the expert pacing, the unshowy revelations casually unveiled throughout rather than stored all for the bumper final chapter – remove all that – and you’re still left with the brilliant realisation of Marcus Chesney’s demonstration.  It looks simple, it sounds simple, it is simple, dammit, but as you progress further through things Carr slowly belies this setup with genius touch after genius touch and you just have to shake your head in wonder.

Fell enters proceedings just before the halfway mark, by which time practically all the pertinent information has been revealed.  And yet there are revelations aplenty to come – Carr certainly isn’t short-changing you with depth and richness here, and if the contortions of, say, The Peacock Feather Murders seem a little too convenient for your liking then you may find this more suited to your tastes: it is a beautifully uncluttered, clear-sighted, whip-smart, and swift piece of devilry that honestly gets better and better as it goes.  I am now just under halfway through Carr’s 80 novels and short story collections, and I can believe that after the remaining 40 are done this will still be in my top five (and the blogosphere’s resident Carr experts TomCat and Puzzle Doctor similarly rate it very highly).

I don’t want to say any more about the plot, there’s already more than enough here, so I’ll take a bit of time to admire Carr’s authorly authority (no spoilers, of course).  The clues are abundant and regular, but the most impressive aspect is how the one crucial thing that has dated the most – something probably fully understood at the time, but having passed into obscurity many years ago – is still explained, highlighted, waved under your nose and given to you in no uncertain terms and you’ll still probably miss it.  A good counter-point is the ‘spot of grease’ on the passport in Murder on the Orient Express: that doesn’t translate these days because passports have changed.  Well Carr has arguably pre-empted such a problem of a key clue and simply covers himself beautifully, ensuring its relevance for the ages.

And then of course there’s his written expression; from simple descriptions such as a man’s hair being described as ‘wirish grey…standing up in humps and angles which sixty years’ combing had been unable to subdue’ to the impossible setup relying on ‘a fiction-writer’s nightmare – a clock that could not be tampered with’, he throws in casual turns of phrase that stick in the mind perfectly.  He also sets tones and scenes perfectly:

And, of course, every line and action of Gideon Fell – from his robust cavils of just about anyone in sight to his questioning a chemist about poisons ‘like a man enquiring after drainage’ – only serves to enhance that gargantuan creation further.  You even get a lecture on real-life poisoners to rival The Hollow Man’s treatise on locked room murders.  As a novel of detection it is simply triumphant, and further proof that Carr is unjustly neglected today; I urge you to track this down at the earliest opportunity.

The good news is that no longer need you scratch around for overpriced, poor condition secondhand copies of this frank masterpiece — in my estimation perhaps the pinnacle of the genre’s output. As of March 2023 it is being reprinted in the increasingly excellent British Library Crime Classics range, raising the distinct possibility that — along with titles put out by the American Mystery Classics range and three books reprinted by Polygon Books — we might actually be getting something of a Carr renaissance. With any luck, The Punch and Judy Murders (1936), The Four False Weapons (1938), The Reader is Warned (1939), and other masterpieces will soon follow, adding to the masterful The Seat of the Scornful (1941), She Died a Lady (1943), and Till Death Do Us Part (1944), as well as the hugely entertaining Henri Bencolin novels, we’ve already been fortunate enough see come to public awareness. Many thanks to all involved in making this happen; keep up the excellent work!