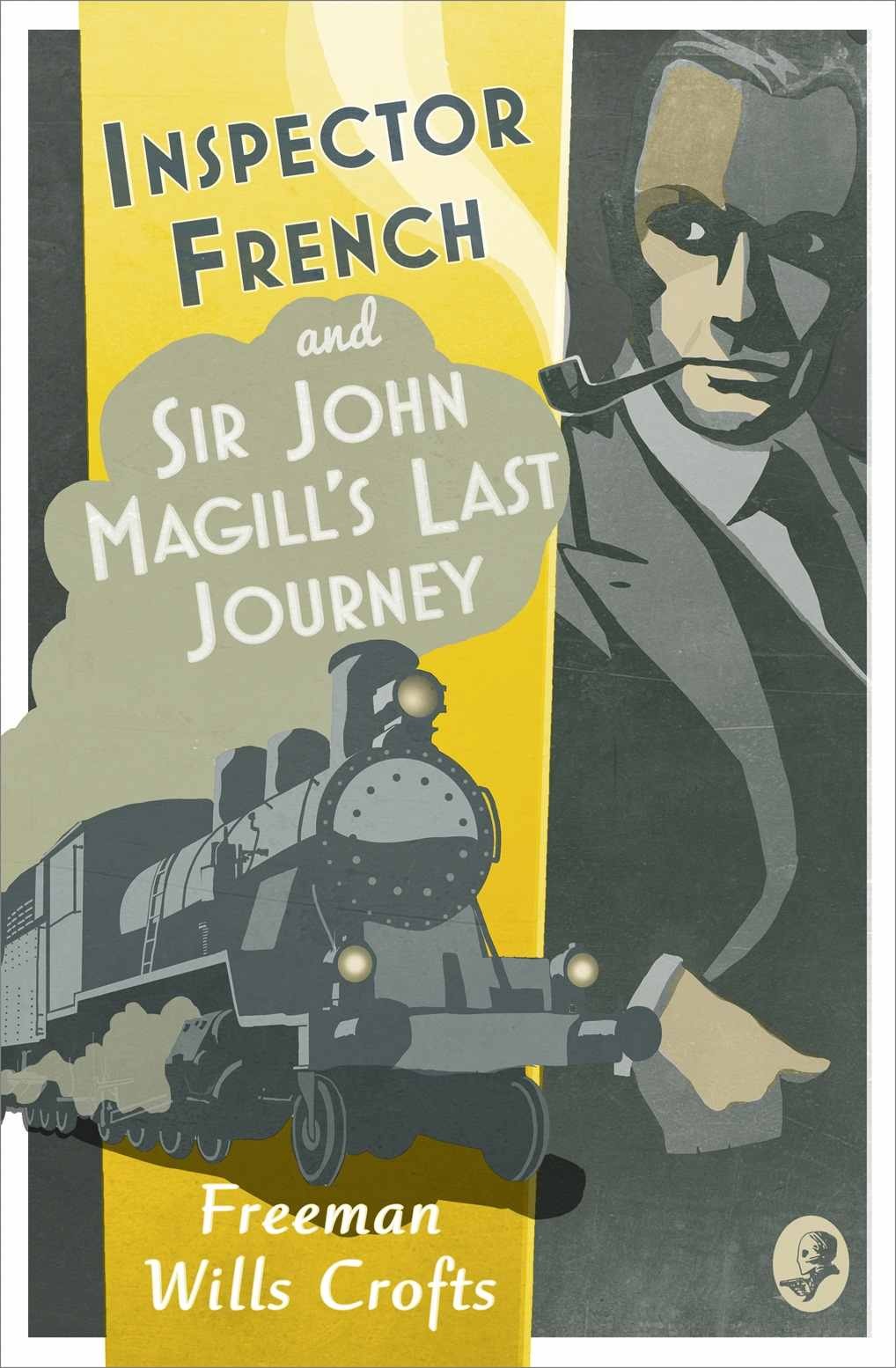 This 2017 HarperCollins reprint — under the title Inspector French and Sir John Magill’s Last Journey — is 309 pages long and took me, almost to the hour, two full weeks to read.  Ordinarily this would be the sign of a very bad book indeed, but, with the end of term and then Christmas to negotiate, had it been any less good — honestly, now — I probably wouldn’t have finished it.  The fractured, disrupted natured of such a reading experience requires the mind to keep plot details fresh while also contending with the busiest time of a busy year, and the clarity amidst complexity of Crofts’ plotting here is joy unconfined to my puzzle-fixated mind.  And with the Nativity headed back into its box, here’s why.

Irish cotton magnate Sir John Magill heads back to his native Belfast from his London retirement for the first time in seven years and, having given his son notice of his intent to stay with him upon arrival, stages a vespertine vanishing on Irish soil.  Thinking the roots of this may lie in England rather than Ireland — it has been seven years, after all — the Royal Ulster Constabulary invoke the dark arts of Scotland Yard and Inspector Joseph French is put on the case.  French, a man for whom ‘recumbent’ simply has no application, gets swiftly to work and we’re left in no doubt that things will get tricky:

[T]here came a time when French might well have said, as Queen Mary is supposed to have said of that of Calais, that when he died [the name Sir John Magill] would be found graven on his heart.

“Complex” does not cover it.  The plot here is a two-sided jigsaw, which once completed and inverted to find the second picture on the reverse, is then reversed again to find somehow yet another, third picture in place of the first.  Yes, there’s a certain amount of confirming timings of planes, trains, and automobiles, but that’s the absolute joy of French — this man and his obsession with detail is a hortative vanguard against running off half-cocked, because otherwise you’ll miss what’s sitting right in front of you.  If you want flamboyant deductions and showy specialist knowledge, definitely go anywhere else; if you want to watch a man tackle scurrilous, pervasive evil head-on with an inexhaustibly creative mind, buddy are you in for a wonderful time.

The commitment Crofts puts into his detail is an acquired taste, but this plotting par excellence does not necessarily have the stultifying effect on his prose that you’ll get warned of whenever Crofts is mentioned.  The rejoicing in the Scottish scenery as French takes the boat to Ireland for the first time is marvellous, and he captures telling moments with sterling brevity — a nervous witness “giving his cap a special flourish”, a surly foreman communicating in a subtly-altering series of nods, French himself hurrying home at one point “for a glimpse of Mrs French”, or drifting off during a dull inquest.  A few too many lucky breaks may come at the last possible moment of exhaustive searching, but you feel the weight of this exhaustion because the tiny moments elsewhere add up.

Sure, French (and so, we must assume, Crofts) finds the “investigation of the life, habits, and human relationships of a given individual…most tedious” and there’s consequently little or no personal drama found herein, but equally the thrill he experiences when the long odds he sometimes runs pay off is expertly parsed.  I’m fine with no shoe-horned love story, no personal investment in the crime; I want to see an investigator apply the full faculties of their brain to brilliant professional detective work purely because they’re a detective and it’s gonna require lots of thinking, and that’s what Crofts gives you in spades.  And shovels.  And hoes.  And a shed or three.  Hell, there might even be what qualifies as GAD character development here as French is less outwardly felonious than in The Sea Mystery (1928) — and people say these ciphers never change!

From a purely historical perspective, too, there are a few points of interest, but two in particular that warrant raising.  The most arresting is the confidence with which it is avowed that “the ‘troubles’ were definitely over and had been for years” — especially as we now know how the political divisions upon the Irish mainland would end up wreaking untold devastation in the decades to come.  The second, and maybe this is just me, is the complete obliteration of the surname prefix Mc or Mac in favour of M’ (M’Clung, M’Keown, M’Candless, M’Nulty, etc) — every single time.  Is this just a naming convention that Crofts got stuck in, or does anyone know if there’s some deeper purpose to this?

In short, come for the plot, leave your hopes of fireworks at the door, and revel in a beautifully complex switchback of masterful construction and multi-faceted imbrications.  This is only the fourth book of his I’ve read, but my love affair with Crofts gets deeper with every chapter.  Expect much more in 2018.

D for Doom @ Vintage Pop Fictions: French is a man who has very strong views on the appropriate methods for a detective to adopt. He has little interest in motives or in psychology. He is positively scornful on the subject of alibis. If anything he is inclined to be more suspicious of a suspect with a cast-iron alibi – after all in the general run of things an innocent man is unlikely to have an elaborate alibi. French is sceptical even of facts. To him a fact is only a fact when it has been ruthlessly tested. A witness might claim to have seen something, in which case he probably did see something. But what exactly did he see? It would be foolish to take anything at face value. Insofar as French has a genius for detection (and his distinguished record suggests that he does have such genius of a kind), it is a genius for scepticism, and for taking pains.

Martin Edwards: The weakness is the clunky prose and thin characterisation. This is from what we are told of Magill: ‘Intercourse with his associates was therefore restrained in cordiality.’ No wonder the young Martin Edwards rather lost the will to live when reading that sort of stuff. And worse: ‘Of all the jobs that fell to French, the investigation of the life, habits and human relationships of a given individual was that which he found most tedious.’ This is a cop who is happier with train timetables than psychology. The result is a book that, despite various merits and historical interest, is a bit soporific for much of the journey.

Ben @ The Green Capsule: It makes for an engrossing read. Each dead end is essentially a puzzle, and each lurch forward is a moment of discovery; something that most mystery writers reserve for the end. On the other hand, there’s no truly great moment of revelation – well, yeah, I guess there’s the core mechanism revealed towards the end – and in that sense you’re not going to get some Agatha Christie style denouement in the final chapters.