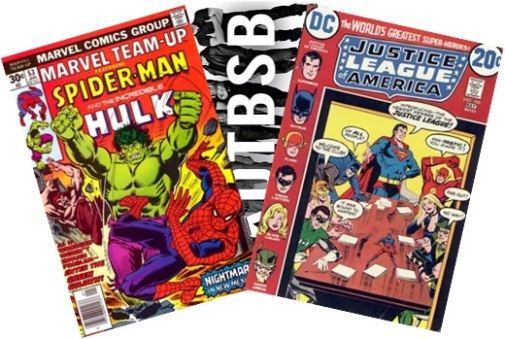 I’ve read a lot of comics in my time, I spend many hours online enthusiastically contributing to discussions about a moderately obscure area of popular culture — hell, I even wear glasses.  I must, therefore, be a nerd.  I mean, sure, I don’t own a single t-shirt emblazoned with some hilarious-but-obscure quote or image, but that’s mainly because the kinds of things I’d put on a t-shirt — “Hairy Aaron!” or, say, a decal of Gideon Fell above the legend Don’t irritate a man who knows 142 ways to kill you without being the same room — no-one else wants on a t-shirt and so they’re not available to buy.

Where was I?  Collaborations.  What’s being a nerd got to do with collaborations?  Well, it should be obvious, but I’m not going to spell it out for you because between that paragraph and this one I mapped out 17 t-shirt designs too nerdy for mainstream society and I’ve lost my thread.   Essentially, how about if two authors whose strengths countered each others’ weaknesses had joined forces and written a book together? The potential seems endless, so I got to thinking about it.

Thus, here are five pair-ups from classics GAD authors that would have been great had they happened; let’s all be jealous of the alternative timeline where they did… 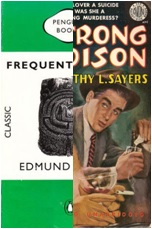 Crispin and Sayers both were astoundingly erudite and informed people in their daily lives; both were Modern Languages graduates from Oxford University and their novels overflow with allusions to the classics, poetry, and music in its many forms, with Sayers in particular pushing the bounds of what was permissible in detective fiction.  Both worked against unusual backgrounds to inform their milieu — campanology, politics, amateur dramatics, academic rivalries — and both had the ability to spin an unlikely setting into the most convoluted of plots.  A pair-up between them would have hopefully seen Crispin’s levity raise Sayers’ lumpen pomposity, and Sayers’ rigid, deliberate structures rein in Crispin’s unfettered and unfiltered enthusiasm. 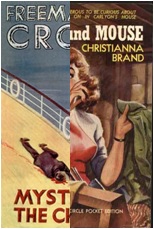 Brand’s gift, I’m coming to appreciate, is in her lightness and the easy way she pushes and pushes at a plot until it breaks, only to show that it then can’t be put back together from what remains and so must be broken anew.  Crofts delighted in obsession over every single detail and composing a picture that eventually strait-jacketed everyone until their positions were fixed by sheer force of inevitability.  Brand would lift Crofts out of his drudgery and spin his alibi problems in four different ways at once, where Crofts would give Brand a greater sense of weight behind her plot and stop the whole thing flying away from too many ideas being thrown overboard in that final race to hoodwink you again and again.  The result would be deliberate, dense, swift, and have a kick so hard that you wouldn’t be able to sit down for a week afterwards.

Two fine farceurs who worked so hard to confront the confines of the mystery novel from the off, it can’t be denied that Bruce was perhaps over-subtle — often stopping at a single inverted hook to sell his ploys — and Berkeley became, if anything, too obtuse in his desire to bamboozle us again and again (see: The Second Shot (1930), which both is as brilliant and as unfairly played as it gets).  Bruce would run narrative rings around us while Berkeley tossed in grenade after grenade to mess up the ground under his feet, and they’d give us an inverted mystery with unreliable sleuths, unreliable narrators, the body parts of convention strewn asunder, and three murders that weren’t committed and a fourth that goes unnoticed.  Aaah, dammit, I really wish this one had happened… 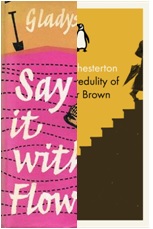 Mitchell for all her flaws, and there are many of them, was able to construct some brilliant set-ups that challenged the conventions of the form, and resolved a few of them in a manner that added genuine new content to the genre; her problem came in the cod psychology by which Beatrice Bradley would cobble together what Mitchell had written and somehow come out with the solution Mitchell had intended in contravention of all common sense and the accrued human experience to that stage of history.  Give her Chesterton’s deep, abiding love of human frailty and his keen appreciation of actual psychology (‘The Man in the Passage’, ‘The Mistake in the Machine’, etc) and — while I’m not sure I’d be able to tolerate it — the resulting story would start unusually, build in ever-more unusual directions, and then resolve itself in a way that both made sense and relied on how actual people actually behave. 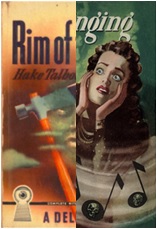 Berrow has an undeniable talent with set-up, atmosphere, character, dovetailing of motivation and action, levity, complexity, misdirection, and clewing.  Talbot has most of this plus the ability to resolve his impossibilities in a way that is intelligent, fairly-clewed, and often original.  Put these heads together and just think of the dark, whirling impossibilities that await: it’s true that Talbot’s output was relatively small and that Berrow is reasonably new to me still, but there’s so much overlap in what they do.  Berrow’s superbly rich plotting brain would give Talbot something to hang his impossibilities on, and he would breathe life into Talbot’s somewhat moribund characters; Talbot would then sew it up with flourish after flourish, and everyone would win.  Everyone, I tell you.

We were lucky enough to get some collaborations here in this version of reality — The Floating Admiral (1931), Ask a Policeman (1933), Drop to His Death/Fatal Descent (1939), etc — but what do you think of my team-ups?  And, additionally, answer me this: who would go well with Ellery Queen?  I struggled with that for ages, but then figured I hadn’t read enough Queen to really offer an opinion; all thoughts, therefore, welcome…

16 thoughts on “#207: Five GAD Collaborations That Would Have Been Awesome”