Well, where to start?  Locked room murders (plural!), magicians, a hefty dose of self-reference, an extended John Dickson Carr homage-cum-lecture, a sprinkling of magical and mystical esoterica, and some really quite awesomely clever solutions…to be honest this — Rawson’s first novel to feature magician detective The Great Merlini and his Watson, journalist Ross Harte — should be a shoo-in for my favourite book of all time.  Something about the conflation of conjuring and seemingly-impossible crimes just gets me all a-giggle with excitement, and Rawson wrote one of my favourite impossible crime short stories of all time (‘Off the Face of the Earth’, since you asked)  so has previous with me, but this just comes up a little short to call it the masterpiece it probably should be.

In structure, it’s not unlike the kind of fiendish puzzles Carr was putting out at this time: the first half is spent establishing a crime or a situation that becomes increasingly dense, then the second half deconstructs that box quite effortlessly with some canny realisations and a few nice reversals of your expectations.  In  this regard it is perfect, with two dead bodies left behind by a disappearing murderer by the halfway stage and then an extended analysis to unravel it all.  In due fairness you’re told the key point on page 2 — I’m spoiling nothing, our narrator tells you that he’s telling you the key piece of information — and seeing this rather cleverly utilised to make you feel even more dense for not twigging to what was going on sooner.

Rawson has a good turn of phrase, too; to wit, when one character introduces another to Harte early on we’re told:

The Colonel’s introduction, continuing for another paragraph or so, began to sound like a sideshow barker’s build-up, and he lost my attention.

Or the lovely sense of atmosphere evinced by tiny moments like the following:

We watched the door.  Two red-faced cops came through it.  The scent of cold air still clung to their uniforms.  Halting just inside, they looked at us, their badges and buttons winking like stars in the candlelight.

There’s the kind of wryness you’d hope for in this type of narrative, too, when non-magicians are asked to entertain the possibility of Murder By Summoned Demon, particularly when the demon in question is described thus:

A bristling cluster of spikes and a thorny, curved tail growing out of his behind must have considerably complicated the art of sitting down.  The monstrosity stood on two emaciated hairy legs that terminated in long-clawed talons, four-pronged like a bird’s.  One oddly gnarled hand clutched a large, unlikley-looking key.  The artist must have been, at the very least, a Surrealist hophead suffering from acute delirium tremens.  Beneath [the demon’s] name I saw the startling inscription “Drawne from the Life“. 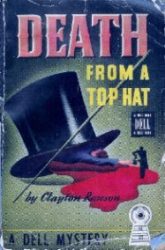 Now, that’s a reasonable concentration of quotes, and I’ve included them for this reason: the main problem I have with this book is the writing style.  It feels very static — where Carr would throw in lovely flourish after lovely flourish, it’s almost like Rawson hasn’t quite figured out his pacing, and so simple revelations and discussions seem to take aaaaages.  Most of the first half takes place in just two rooms, and by crikey doesn’t it ever feel long.  This leaden-footedness is a stumbling point for me, because the delights proffered should skip far more lightly than this and it’s a shame for it to feel more like a golem than a dancer.

Because everything else is very good — there’s a nice self-referential twist on the Yellow Menace aspect that we all know was such a feature of this era, and a superb flash of First World War paranoia that’s all the more striking given that this is set contemporary to its writing.  The solutions, too, are very clever with one minor gripe — if you’ve read it then I imagine you have the same slight difficulty with it that I do — but given how fully everything is spun about and how marvellously wrong-footed you’ve been all along I’m willing to forgive certain authorly…impishness, let’s say.

So, the seventh best locked room mystery of all time?  Perhaps, perhaps.  Difficult to judge at this stage (I finished it about, oh, two minutes before writing this) but it’s certainly criminal that it’s out of print.  Worth finding, and as creative as you’d expect from an expert illusionist, but I’m hoping Rawson’s writing lightens for future installments.

I submit this review for the Golden Age Vintage Cover Scavenger Hunt at My Reader’s Block under the category A Hat (well, what else?).