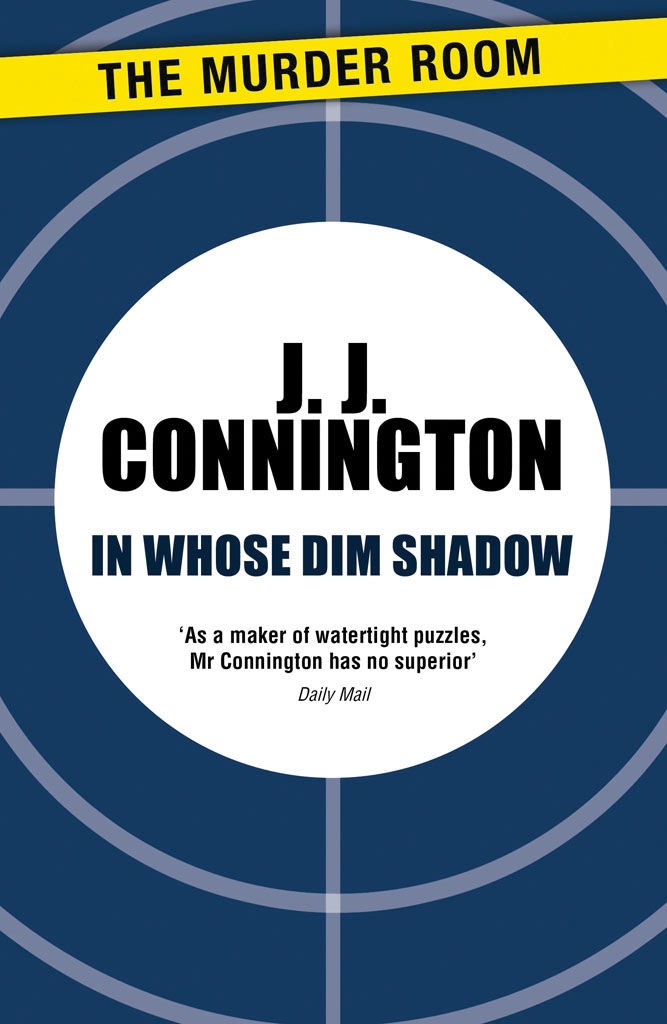 In the comments of my review of The Sweepstake Murders (1931) by J.J. Connington, TomCat pointed out that the author’s sole impossible crime novel was among my recently-acquired bundle, and here we are.  In Whose Dim Shadow, a.k.a. The Tau Cross Mystery (1935), however, begins with a shooting in an unlocked room in an unlocked flat that also has a set of footprints leading away from the open French windows and which forms the basis of the majority of the narrative.  And a very entertaining narrative it is, too, only falling down when Connington shanghais pace for exposition, and struggling in the final straight due, in all likelihood, to external concerns.

After The Sweepstake Murders and The Case with Nine Solutions (1928), this is my third encounter with Connington’s series detective Sir Clinton Driffield, though the first time he’s really made any impression on me.  And I quite like the old boy; on one hand he’ll declaim any “finer feelings” on behalf of the situations he encounters — “[S]o long as a grateful county pays me my salary I propose to earn it” — and yet he also recognises the efforts put in by his juniors and knows when to trust them and resents any discredit shown to them.  And he’s a fundamentally decent man to those non-police he encounters: in his dealings with the exceptionally dogged reporter Barbican, Driffield remains lightly humorous and wry (“If you’ve bought your salt cellar, you’ll have to take it away again…”), recognising that man’s intentions (a freelancer, hoping for a scoop that will land him a salaried job) but also the damage too much disclosure could do to the case.

Driffield’s tag-along, Squire Wendover — it would be imprecise to label him a Watson, since he’s capable of making a few connections of his own, and fills the role more of Rupert Penny’s Tony Purdon as an interested party who simply gets dragged in his policeman friend’s wake — I’m less keen on, but that might just be because of the classism in which Connington seems to wallow through his eyes.  Complaining of one suspect being “ill-bred”, dismissing a Frenchman as a Norman who will “make a sou do a full five centimes’ worth of work before they will let it out of their hands”, generally rallying against the Working Man who didn’t have the good sense to be born with acres of land entailed to him, “disgusted” when a young woman “set[s] herself to mislead the Inspector” because it “wasn’t what he had expected from her face and manner when she first entered the room”…no, Wendover and I do not play, though thankfully he’s easy enough to ignore most of the time.

It also helps that the plot around these two is a good one, and Connington has a firm grip on the principles of the detective novel.  One suspect’s policy of “stick[ing] to the truth unswervingly — up to a point — and yet leav[ing] an entirely false impression on her hearers” captures the genre quite neatly, and, when at the two-thirds point we’ve a bundle of clues attained early on which seem to point in no particular direction, you can rest assured that the truth has been stuck to and a false impression generated.  The detection is solid, too, based on good physical clues and just enough luck to be believable, and Connington declares plenty on the way to playing very fair.  He also is wise to the detective plot becoming too much of “a crossword puzzle of sorts, with a splash of blood across the paper” and strives to give us well-realised characters that have slightly more to them than words put in their mouths to be said at the appropriate point.  Though, in some ways, this causes the novel’s chief problems.

Chapter 2 telling us plenty about Constable Danbury works well, because it’s through his eyes that we first encounter the action, even if we learn much about him that’s more charming than useful (the use of “curtilage” for one, is a little bit adorable).  But then chapter 6 tells us far too much about Mrs. Sternhall, in whose flats the murder occurs, and chapter 10 tells us far too much about Mr. Barbican, and chapter 13 tells us far too much about Mr. Mitford…a lot of this is unnecessary, and it feels like too much camouflage for the stuff that is necessary and so what Connington is trying to hide sticks out a mile.  He writes very well indeed at times — c.f. Danbury answering “the sharp authoritative knock of one who knows he will not be stayed”, someone’s business dismissed as “a kind of olla podrida”, the Japan-obsessed Mr. Mitford’s talk of “Harry Keary” — but I wish he’d been a bit more restrained in the longueur-cum-studies of his people. 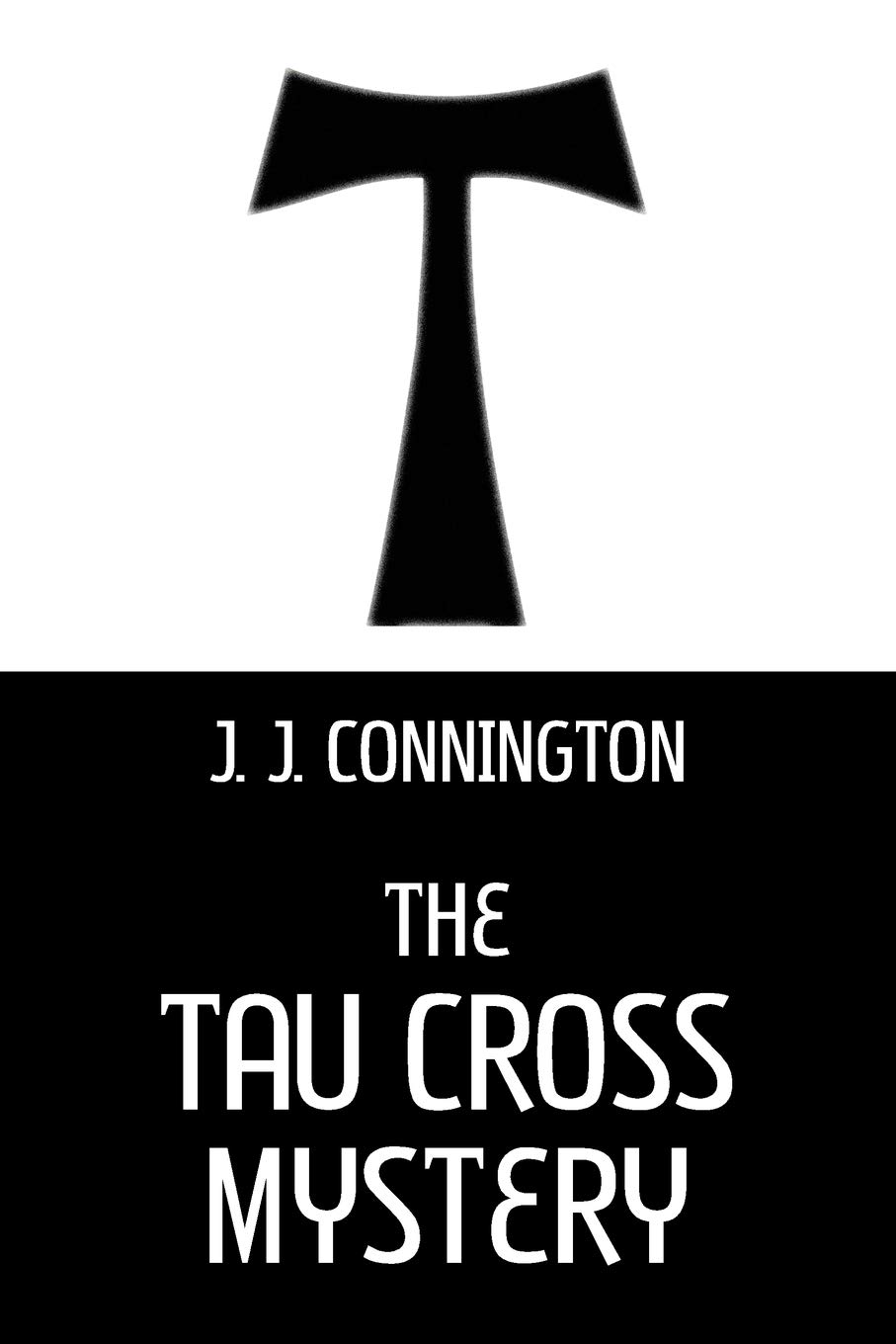 The locked room shooting which invigorates proceedings in the final stretch is an interesting one, not least because Driffield claims to know the killer well beforehand but claims he must wait because “it doesn’t do to make a slip in a murder trial”.  There’s not really any of that excellent detection here, though, and Driffield figures out the (unsurprisingly, technical) method purely because Connington knows how it was done.  However, as Curtis Evans mentions in his introduction, and covers in more detail in Masters of the Humdrum Mystery (2012), given that Connington was afflicted by increasingly-worsening cataracts when writing this it’s perhaps understandable that these closing stages feel a trifle rushed even as it’s a shame to see such promising ground not fully explored.

A quick side note on that locked room, though.  Curtis mentions this being written by Connington in the Spring of 1935 and towards the end Driffield is moved to reflect that:

“I’m a bit sceptical of locked  rooms.  I’ve thought out about six different ways of managing the locked-room trick.  Just as an intellectual exercise, it’s a suggestive theme.”

No more is said, but given that Gideon Fell had earlier that years outlined precisely those sorts of tricks in The Hollow Man, a.k.a. The Three Coffins (1935) by John Dickson Carr, it’s tempting to wonder if this was some sort of reference to Carr’s brinkmanship.

We get, too, a sense of what is and isn’t public knowledge — I mean the reading public, not the fictional one in this narrative — through Driffield’s talk of “different brands of blood” at a crime scene and the confusion this causes Inspector Chesilton when it’s revealed that you can sometimes tell when the red stuff comes from two different people.  For some reason this put me in mind of that Martin Hewitt story by Arthur Morrison where he’s talking in the rogues’ argot and every slang phrase is footnoted — to the modern mind, delightfully quaint, but the contemporary reader would doubtless have been largely ignorant of such knowledge.  A fascinating subject on which I really must prepare a monograph one of these days — not least because in expressions like “all my eye and Berry Martin” there’s the counter consideration of what falls out of public knowledge.  But, another time.

This is a long review for a book that only 60% convinced me, but it feels rather like I’ve gotten the measure of Connington with this one and I’m very intrigued by what I’m due to find in his others.  Take out those verbose character meanderings and it’s a spry, easy to read, and very enjoyable time that shows the genre off well.  Yes, the guilty party will jump out at you and must clearly be a jack of every trade going in order to commit these murders as they do, but that’s part of the serious business of the fun I had here.  And if, as Curtis assures us, Connington’s earlier works are his best, then I’m very much looking forward to them.

J.J. Connington on The Invisible Event