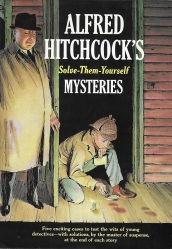 Five short mysteries from the pen of Robert Arthur in the year before he launched The Three Investigators on the world? What’s not to love? And this first story even comes with a supplementary mystery all of its own.

Before we get into that, though, here’s what the next five Tuesdays will look like if anyone’s reading along at home:

In what feels like a precursor to the Three Investigators’ cases, each story here is introduced by ‘Alfred Hitchcock’ to give you a flavour of what’s to come, and — in this one, at least — he also crops up at key points to cavil the reader along and generally encourage you to pay attention to clues that are about to be scattered: the idea being, as the title of this collection suggests, that you’ll be able to solve these mysteries yourself ahead of the final summation.

‘The Mystery of the Five Sinister Thefts’ takes place over one afternoon at Clanton’s Circus against a background of unease and growing discontent on account of the various items that have been stolen from among the performers’ possessions over the last week:

“Five nights ago somebody stole Biggo’s best pair of shoes.  The the next night they stole Major Mite’s lucky cane.  The following night, Cowboy Anderson’s prize roping lariat disappeared, and the next night they took one of Sabre’s swords.  And now a snake!  It just doesn’t make sense.”

The snake in question is Madam Winifred’s Belle — taken from the snake handler’s caravan where there’s “only one window [with] heavy mesh over it” which has been cut away so that Belle might be lifted out of her cage and secreted who knows where.  Can youthful Jerry Mason — alas, he lacks an adoring companion called Ella Street — solve the mystery before the fomenting superstition and unhappiness in the circus sees the performers quit and his uncle, who runs the whole shebang, left without a show to take on the road?

Robert Arthur was, of course, a consummate professional as a writer, and the work done here to set up the circus milieu, work in the murmurs of dissatisfaction among its denizens, and provide clues as to culprit and the reasons for the thefts is as effortless as it is obviously extremely tough to do so seamlessly.  We open with the various performers — Cowboy Anderson, the acrobats Achmed and Abdullah, the circus giant Biggo and midget Major Mite — all unable to focus on their practice given the disruption the thefts are causing, and Arthur enriches this further by having clearly steeped himself in the argot of the circus as well as the different concerns the performers face.  So you’re informed about circus “Monday Men” who were “permitted to steal only from clotheslines in the towns where the shows played”, and how the clowns are always on hand to distract the audience’s attention should anything go wrong during another performer’s act.  These little nudges that Arthur gives his setup do more to fill in the necessary details than would any amount of long-winded exposition, and more authors would do well to study the technique.

Jerry has been adopted into the clowns’ routine despite being a newby to the circus — a “first of May” — and so has a legitimate reason for involving himself in the investigation while also enjoying the outsider status of an amateur detective (in a lovely moment we have head clown Jacques described as being “aloof with Jerry, but not unfriendly, as befitted his position as a circus aristocrat”).  And Jerry’s a smart cookie: shortly after the introduction of the performers and the thefts they’ve suffered, the crime is laid out in such a way as to implicate two of them, and Jerry is quick to jump on the connections that the attentive reader thinks they’ve made by pointing out the fallacies in the reasoning the lead to that conclusion.  And it’s when an additional theft is uncovered, and some of the items turn up in sinister circumstances, that he’s finally able to put it all together…

I solved this about a page before Jerry reveals the answer, and it’s a lovely little puzzle that rewards all the points raised.  It doesn’t quite play fair in the strictest sense — you’re told ‘Jerry suddenly realised the import of Thing X which he’d noticed twice’ rather than being informed of Thing X itself when it happens…but since Thing X is the key to the whole puzzle, I can’t see any better way of Arthur declaring it without giving things away far too early.  And the answers come with a real sense of consequences, too: in one key regard, it’s interesting the decision Arthur makes, when it would be reasonable — or perhaps a better word is easy — to expect an entirely different outcome.  Somehow that decision alone makes this feel a bit more significant, and helps the story live on in the memory where a less skilled hand would have rendered it light and eminently forgettable.  A good show, and a great start to the collection.

But what of that supplementary mystery?

It goes like this: every reference to ‘The Mystery of the Five Sinister Thefts’ you’ll find will inform you that it was inspired by a story called ‘The Case of the Stolen Snake’ by Morris Hershman.  Hershman was a contemporary of Arthur’s with no small amount of material to his own name, and I was interested to see how the two stories compared and what ideas of Hershman’s had struck Arthur as worthy of expansion.  So I thought I’d find and read — or watch or listen to, depending on the form it took — Hershman’s original story for the purposes of comparison.

And, well, it doesn’t seem to exist.

Apart from an episode of a TV show called Superior Court from 1989 — and that seems to be the dramatic rendering of real life court cases, and is nearly 30 years too late — I can find no reference for ‘The Case of the Stolen Snake’ as a short story, a novel, a radio play, a teleplay, anything, under Hershman’s own name or the various noms de plume he adopted over his career.  It’s not in the British Library, not on the WorldCat.org website, nowhere.  I even went so far as to trouble a few people far more knowledgeable than me — including Arthur’s daughter and son-in-law — as to the story’s existence, and no-one seems to know what it was or how Arthur came to encounter it.

The information itself comes from the inventory of Arthur’s work as compiled by his executor, who is since long dead, and I wonder if we’ll ever actually find out what ‘The Case of the Stolen Snake’ contained.  So I throw it out as a challenge to you, dear readers: if you find this story at some point in your wanderings, do please let me know about it.  Someone will now dig it out in about five minutes and make me look like the simpleton I am, but I wouldn’t have a problem with that since I’m far from the only person this has stymied in recent weeks.  You’d make happy some people I’ve made slightly curious, and we’d all be very, very grateful indeed.