The final two stories for this month to be plucked out of the listings in Robert Adey’s reference bible Locked Room Murders (1992) sees a return to the work of Cornell Woolrich, who was discussed on this site only a few weeks ago.

Woolrich, it must be said, becomes more interesting to me the more I read.  Having tried, and not especially enjoyed, his collection Nightwebs (1971) as part of the now-defunct Orion Crime Masterworks series, I found him not to my taste and put him aside before my impossible crime obsession brought Mystery in Room 913, a.k.a. The Room with Something Wrong (1938) into my orbit.  And this revisiting, perhaps on account of the finer focus out of the 250-some stories he wrote, has shown him to be an author of quite wonderful ability, working in a suspense vein which, if still not quite my taste, at least convinces me to put my tastes to one side and enjoy the ride he’s taking me on.

Oh, god, please don’t let me segue into a Hardboiled fan; I’m already becoming a Humdrum, and too much change at my time of life is going to be upsetting for everyone…

‘Murder at the Automat’ (1937) is another one from Tantalizing Locked Room Mysteries (1982) eds. Isaac Asimov, Charles G. Waugh, and Martin Harry Greenberg, and it turns out that I did not know what an automat was.  It appears to be a sort of cafe, where the food comes pre-made in a vending machine-style setup: plates of spaghetti bolognese, wax-paper wrapped sandwiches, etc.  You put your money in the machine, take the food out of its section, and there are tables for you to sit and eat.  It’s in typing this — with apologies to those of you who know what an automat is, you seasoned culture vultures, you — it’s occurred to me that I was expecting a laundromat (I think — it would be a launderette in the UK, somewhere with washing machines and tumble dryers) and I had no idea an automat was even a thing.  Just goes to show, you’re never to old to go on learning.

We start, then, with a dead body slumped over a cyanide-laced bologna sandwich at a table for four, the three other patrons apparently unknown to our victim:

“[T]he sandwich is loaded with cyanide crystals. On the other hand, they give the remainder of the loaf that was used, the leftover bologna from which the sandwich was prepared, the breadknife, the cutting-board, and the scraps in the garbage-receptacle — all of which we sent over [to the lab] — a clean bill of health. There was clearly no slip-up or carelessness in the automat-pantry. Which means that cyanide got into that sandwich on the consumer’s side of the apparatus. He committed suicide or was deliberately murdered by one of the other customers.”

But, since the sandwich was wrapped in wax paper, and no-one would have had a chance to get near it before the victim took a bite (“the whole thing had been over with in a flash. He had noisily unwrapped it, taken a huge bite, swallowed without chewing, heaved convulsively once or twice, and fallen prone across the tabletop”)…howdunnit?  Added to this is the apparent skinflint nature of the deceased — the bit with the lightbulb is a little heartbreaking, it must be said — and the fact that he’s carrying $2,000 (about US$35,000 or UK£28,000 in today’s money) on his person, and there’s clearly something more to this poisoning than meets the eye.  Woolrich uses this setup not for the sort of technical shenanigans that typically accompany impossible poisonings, but instead to look at the various attitudes and characteristics of the people involved — the reluctant witness facing the prospect of being made a patsy, the aggressive ‘bull’ cops willing to beat a confession out of an innocent man rather than find the guilty one, the family the dead man Leo Avram kept in shoestring living conditions suddenly possessed of the wealth he was hiding from them…as a collage of lives intersecting, this is quite something.

The use of psychology to narrow down the killer and the method shows, I think it could be argued, the way that the detective genre was going to end up moving: Woolrich seems to be far less interested in physical clues than in the perversity of people doing things in a certain way for a specific reason.  We get an early glimpse of this when our detective Nelson is trying to get a handle on Avram at the start of the investigation:

The man at the change-booth, questioned by Nelson, added to the old fellow’s reputation for eccentricity. Other, well-dressed people came in and changed a half-dollar, or at the most a dollar bill. He, in his battered hat and derelict’s overcoat, never failed to produce a ten and sometimes even a twenty.

The suspense setup of the final confrontation has about it now a slightly unfortunate Westley/Vizzini parallel, but if that reference means nothing to you there’s undoubtedly a certain fizz of tension beneath the surface, and a certain pitch black comedy in the moment someone is told “I’m not quite ready for cremation yet”.  This is by no means an impossible crime story that excels in method or detection, but as a piece of grimy, believable human interest it works on a variety of levels, and it’s fair to say that this is where Woolrich was aiming and so, on that measure, it can be determined a complete success. 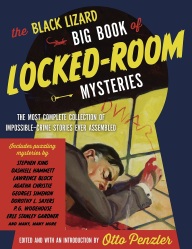 ‘All at Once, No Alice’ (1940) was one of the few remaining stories I’d not read in The Black Lizard Big Book of Locked Room Mysteries (2014) ed. Otto Penzler, published, one presumes on account of Woolrich’s productivity, under the nom de plume William Irish.  And it is, in all honesty, masterful.  Sure, the essential mystery — in which young newlyweds James Canon and his wife Alice try to check into a hotel but find there’s only room for her, and he returns in the morning to find everyone denying Alice’s existence — isn’t exactly baffling (good heavens, he ignored a lot of red flags in his whirlwind romancing…), but the way Woolrich spins out this nightmarish situation from such humble beginnings is phenomenal.  At each stage as Canon and the police officer who barely believes him work backwards they find more and more blankness, more denials that young Alice Brown ever existed in any of the places Canon is able to name, and the escalating panic and confusion is wrung out of every moment.

[S]omething was already trying to make me feel a little cut off from them, a little apart.  As if a shadowy finger had drawn a ring around me where I stood, and mystic vapors were already beginning to rise from it, walling me off from my fellow men.

This is a situation seen in the likes of ‘Cabin B-13’ (1943) by John Dickson Carr, or more recently the Jodie Foster-starring Flightplan (2005) (we’ll gloss over Julianne Moore’s The Forgotten (2004) because, well, that one’s down to aliens…), but neither of those had a scene in which their bewildered protagonist tried to commit suicide due to the hopelessness of their situation.  Woolrich is able to ramp up the feeling of dislocation by simple expedients like his protagonist simply refusing to bend, refusing to acknowledge any other reality except that in which his wife exists, and the cold rationality of this becomes like an anchor which fixes him in waters nevertheless washing him further and further from those who surround him.  The glorious agony of this no-win situation — “I wanted to preserve my freedom of movement more than all else, to try to find her again.  If they threw me in a cell, or put me in a straitjacket, how could I look for her, how could I ever hope to get at the bottom of this mystery?” — sustains the narrative tension beautifully, with events in the latter half becoming more like the Harlan Coben-esque plots which have borrowed so liberally from this in the decades since, but without veering into the melodrama so many modern authors overload such situations with.

is it obvious what’s going on?  Yeah, pretty much.  Does the solution display the ingenuity of, say, ‘The Problem of the Leather Man (1992) by Edward D. Hoch wherein three independent witnesses similarly deny the existence of someone previously believed real?  No, not a bit of it, but Woolrich does straddle two streams very effectively, and brings a throat-gripping tension to proceedings that heightens the suspense impressively, not least because of how unvarnished his representation of Canon’s escalating panic is:

My pawing grip slipped down his sleeve to the hem of his coat, and I was looking up at him from my knees.  What did I care?  There was no such thing as pride or dignity any more.  I would have crawled flat along the floor on my belly just to get a word of relief out of anyone.

So, yeah, I may be a Cornell Woolrich fan now.  It’s too early to say definitively, I’ll obviously have to take on a larger sample of his work, but as three near-random selections go these give me much to think about.  There is a dull-edged practicality to his situations, and a simplicity to his psychology, that is very appealing after being so entangled with the crime-as-entertainment puzzles in which the Golden Age so specialises.  Add to this the casual casting off contemporary details that enrich these tales — here we learn that men wearing wedding rings was only recently coming back into style, which I never knew had ever gone out of style — and, in spite of its flaws, we have a tight story that does most of what I want my genre reading to do.  No wonder I’m so taken with these two tales.

Woolrich, as any brief glimpse at a biography will tell you, didn’t live a happy life, and you feel this infected his writing to the point of really bringing home the nightmarish relatability of his situations.  His characters, too — possibly from so long living in hotels and encountering, one presumes, so many people fleetingly — jump out distinctly and quickly right to the mind and the eye, and that immediate familiarity with the downtrodden, the hopeless, and the crusading soul at the heart of the storm who seems determined to make sense of it all is a compelling combination.  These three stories I’ve read recently are each excellent in their own ways, and you can expect more Woolrich on here in future.

Next month, Tuesdays will be dedicated to some more Adventures in Self-Publishing…