I’m back from holiday, and would you care to guess how many books I read whilst travelling around the USA for a fortnight?  Pick a number, and then click to find out if you were close…

Well, I’m not going to tell you, because it’s not what we’re here to talk about today; today is about the next two books in Tanya Landman’s bullet-fast, fixed location mysteries for younger readers featuring the irrepressible Poppy Fields and her school friend Graham, whose imperturbable nonchalance in the face of escalating murders is excusable on the basis that a lot of people have died around them in their short lives.  Like, these two are harbingers of death on a Jessica Fletcher scale.  No wonder no-one else hangs around with them.

Having previously trapped her two sleuths on an isolated island in the series debut Mondays Are Murder (2009) and in a film star’s mansion in Dead Funny (2009), Landman gives us in these next two books another two classic detective novel settings: the theatre, and a school.  Again, these stories are pared down to the near minimum in terms of character and events — coming in at 112 and 102 pages respectively — and again it’s great fun watching things unfold at such break-neck pace.

Dying to be Famous (2009) sees soap star Tiffany Webb come to town as the star of pantomime The Wizard of Oz, and Poppy roping Graham into auditioning for parts in the chorus under in order to be able to observe Tiffany’s celebrity behaviour close up.  in fairly short order there is a poisoning of one of the backstage staff, a masked figure posting threats on the theatre doors, and another attempt on Tiffany’s life that comes even closer to derailing the whole thing.  Who among those involved in putting on the show would wish her such harm?

It’s another fun little closed circle mystery, made all the more enjoyable by the admission of Poppy’s that the notion of a potential killer in the midst of what appears to be an eager group of volunteers and arty types is all the more terrifying because of how well they’re clearly masking their true intentions.  This may sound weird, but I read so much of this type of novel that I tend to neglect that side of things: typically you know going in that there’s going to be some sort of criminous scheme, and as a reader you’re more on the lookout for clues than you are concerned about the potential of someone being the murderer.  Of course someone’s the murderer, how else could there be a murder?!  Class GAD fiction tens to gloss over this soul-searching side of things because, in all honesty, it’s not what the books are about, and one of the things I have especially enjoyed about getting into these books for younger readers is having that element brought to the fore once again.

And, in all honesty, Landman has a nifty way with dropping in some very intelligent considerations, too:

“You’re looking at it too logically,” Graham said. “A true stalker is a delusional obsessive.  Some of them never even meet their victims face-to-face and yet they thing they’re married to them or something stupid.”

“Oh yes.  They end up believing all kinds of peculiar things.  It’s called de Clerambault’s Syndrome, I believe.  There was one famous case I read about where a woman became fixated on King George V.  She thought he was in love with her and used to hang around outside Buckingham Palace.  Every time the servants drew the curtains she was convinced he was sending secret signals to her.”

If there’s one flaw, I’d say that the use of cunning little pointers along the way — such as microphones, chocolates, and the apparent vanishing of someone from the stage — aren’t woven in to more of a damning pattern, and instead the eventual culprit is simply surprised with an accusation and monologues all the relevant details.  We have most of it, and I’m being a little unfairly picky given the intended audience, but I really enjoy these books and would love to see a more logical chain of reasoning result in the finger of accusation being levelled at the guilty party. 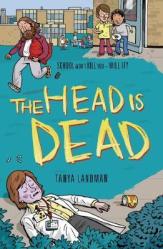 The Head is Dead (2009) — you might see the sublimation of an urge here, with the start of term two weeks away, but I couldn’t possibly comment — is a school-set mystery which indulges in another classic piece of plotting: the Murder Game Turned Real, with the easiest parallel being that of Agatha Christie’s Dead Man’s Folly (1956).

A school with an unpopular new headmistress holds a spring fayre to raise money for a new garden that Poppy’s mother is hired to create, and Poppy and Graham are utilised to write a murder mystery trail which will have said headmistress as the body at the end of the hunt.  As the title reveals, no clever acting will be required on the part of the corpse: Poppy happens upon a parent apparently having just killed Mrs. King…but of course it can’t be that simple…can it?

I especially enjoyed the nod to the complexities of detective fiction in this one, with Poppy and Graham initially writing a scheme in which…

…[t]he victim was a nuclear scientist masquerading as a teacher who was secretly married to a woman in Russia but dating a local nurse who was really an undercover spy who was in love with a gardener who had a brother who was violently opposed to nuclear power and determined to stop the scientist designing a new reactor.

Ah, the simple life!  A new wrinkle is introduced here with Poppy and Graham being left somewhat bereft at the local constabulary’s lack of interest in their theories, seeing as a perfectly likely suspect presents themself and there’s no real reason to suspect anyone else (indeed, the faith Poppy and Graham seem to have in his innocence is a little misplaced…but, well, we all know it can’t be the man found crouching over the body…!).  There’s some solid misdirection here, though S.S. van Dine would possibly not approve, and it’s enhanced by some lovely turns of phrase — one of the reasons I especially enjoy the brevity of these, as Landman has to create setting and mood with a minimum of space — such as staff in the new regime appearing “slightly stunned: like the survivors of a violent earthquake who have crawled out of the rubble of a collapsed building and are temporarily dazzled by the sun and confused by the changed landscape”.

One particular piece of clue-dropping is especially pleasing, and when it all unravels come the end — and we’re into enjoyably campy Scooby-Dooish reveals by this point — the essential idea is both a little moving and as classical a piece of motive as ever appeared on the page.

So, these books remain a pleasure to read, with Poppy’s ghoulishness now slightly fettered by an appreciation of the horrors of the loss of life, Graham’s nerdish attitudes used to bring a well-rounded consideration to proceedings, and all the other characters brought to life by canny observations and asides that make them breathe for the few pages we know them before they, er, stop breathing.  I remain a big fan of this series, and I’m delighted to have stumbled across it.  Poppy and Graham shall return…

The Poppy and Graham Mysteries: