My inability to walk past a secondhand bookshop without at least having a “quick glance inside” recently resulted in me purchasing a stack of the Alfred Hitchcock and the Three Investigators titles, books I was aware of but have not previously read.  So buying 22 of them in no way counts as a spontaneous over-commitment, oh no.  Anyway, The Secret of Terror Castle is the first of the series and here are some thoughts on it.

1. There is no reference to Hitchcock’s directorial work

Here’s something that surprised me a little, as Hitch is referred to as a producer but never a director.  I mean, sure, his work around the time of publication — Psycho (1960), The Birds (1963), Marnie (1964), Torn Curtain (1966) — was aimed at an older audience than that of these books, but surely he was known as a director of the likes of North by Northwest (1959) and other such accessible masterpieces.  Failing that, he’d hosted Alfred Hitchcock Presents… on TV for several years prior to this, and an awareness of his physical appearance is one of the plot-crucial points that gets Jupiter Jones and the rest an appointment with him.  To simply refer to him as a “producer” seems weird to me.

2. Anyone can find you in the phone book

Here is the business card the boys are printing at the start of the book: 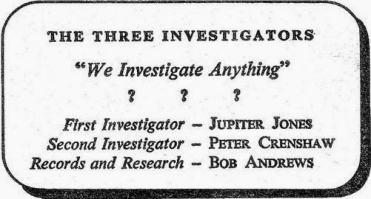 So…how do you get in touch with them?  Thankfully phone companies in the late 1960s were lax enough to allow any 13 year-old to get a phone line installed (they have one in Headquarters, and it provides a necessary plot point later on) and list the number publicly; ahhh, privacy, how we take thee for granted…

3. There is evidence of some of the best traditions of the Golden Age…

Without wishing to get into spoilers, the deduction with the lemonade is superb, not only as a piece of observation and ratiocination but also as the exact kind of thing you could believe someone of that age would pick up on.  Equally, there’s some very good clewing with regards things like the sense of unease felt in and around the castle, plus a decent sense of rigour (loosely) applied in the various investigations taken at the castle throughout.

The fake-out with the motives at the end is bloody clever, too, as is that thing done with the members of the gang the Investigators discover there.  To be honest, it’s this particular development come the end that impressed me the most, it’s a very, very clever dodge that plays perfectly into the scheme of the book.  Who knew Young Adult novels from this era were so rock solid on their motives?  The same sort of thing would never have happened to the Famouse Five…

I can stand a secret passage, nothing wrong with that — I’d probably be disappointed if there wasn’t one in a book of this ilk — but we veer dangerously into ‘a poison previously unknown to science’ territory with the couple of explanations offered up elsewhere, and that impossible ghostly phantom that was seen playing the organ is…well, everyone deserves better than what’s offered up here.

Sure, there’s the old “but it’s for kids” argument, but that doesn’t really hold any water now, does it.  Robin Stevens showed this stuff can be written intelligently for younger readers, so some standards should be observed.

5. The title is kind of genius, though

The bastardisation of Terrill’s Castle to Terror Castle — it’s just very graceful, innit?  Like, I’m aware it’s a castle that incites feelings of terror and so the name sort of suggest itself, but there’s an elegance in there being another root to the nomenclature that appeals to the language nerd in me.

6. As is the non-nuclear family

Jupiter Jones is an ex-toddler actor who lives in a junkyard with his aunt and uncle and two Teutonic twin brothers…and at no point are we made to feel like this might be something that either will be or needs to be explained.  The early description of him as someone who didn’t like being laughed at and so worked hard to acquire knowledge captures him perfectly, not seeking to make a deal out of his living arrangements where one isn’t necessary.

If anything, this is turned into an element of aspiration: he had free reign to construct his own hideout with multiple secret entrances and a sort of juvenile Bat Cave with a darkroom and heaven alone knows what else…I’m sure we’ll find out more about it as time passes.  But that the nominal outsider is made out to be the lynchpin of the entire enterprise is the kind of idea that I’ve seen a lot of YA fiction strain to achieve with about nine times the effort and half the success that Arthur casually does it here.

7. This could almost be sold as The Young Nero Wolfe Mysteries…

…with Jupe growing up to become Nero and Pete Crenshaw as the young Archie Goodwin.  Maybe it’s just me with a Rex Stout book in the back of my mind, but the way Jupe dispatches his friends to perform certain tasks and make certain observations when he himself is laid up with an injured ankle has an echo of Wolfe’s obscure undertakings for Archie and others at times.

Crenshaw, too, is the witty one — stopping just shy of the “Zoinks, Scoob!” sort of cowardice that this could easily devolve into, there’s a doggedness and a trust in the situations he’s sent into that echoes Archie’s faith in Wolfe even as he questions the precise necessity of doing what is done.  The relationship isn’t as abrasive here as it is in Stout’s books, obviously, but they are young and it’s easy to see this evolving over time into that sort of badgering, baiting respect.

8. The surrounding world is filled out very cleverly

The hurdle that a lot of YA detective novels must first overcome is making it believable that 13 year-old boys could be allowed to undertake such investigations as these in the first place.  We return to aspiration again in the whole “teenager investigating in an adult’s role” which makes this sort of thing so appealing, and if you’re unable to simply accept that this is going to happen then you’re in the wrong place, Boo.

What I liked about this book was how around that central unlikelihood there were enough wrinkles that felt real so that the whole thing wasn’t simply problems being swept out of their path: Bob Andrews and the cast on his leg (which, again, is there without us needing to know why), the fact that he’s required to work extra shifts at the library o a couple of occasions and so the investigation is held up…little moments like this that don’t serve the plot, but in not serving the plot serve the world itself.

At the beginning of one chapter Andrews is late to a meeting of the Three Investigators because he gets a flat tire on his bike.  It serves no other purpose in the plot that I noticed, but the fact that it happens, is remarked upon, and has some minor effect on the immediate situation without become a plot lynchpin is just the sort of verisimilitude that helps sell the bigger, less likely setting.  You may disagree; if so, feel free to start your own blog and expound on the reasons I’m wrong.

9. I have a new favourite expression

“The room beyond was as black as the inside of an alligator.”

Which is also rather apt…

In one of those freak coincidences that never happen in real life, TomCat put up a post about a little-known audio dramatisation of this the other day, and you can find his thoughts here.  His thoughts on the book itself, meanwhile, are here…

Now enough with the coincidences — it’s giving me the heebie-jeebies!

34 thoughts on “#277: The Temple of the Great Jupiter – The Three Investigators March in The Secret of Terror Castle (1964) by Robert Arthur”