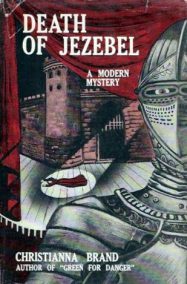 Apologies for my recent blogging absence; a combination of what I understand are referred to as ‘IRL’ circumstances and the fact that everything I picked up and tried to read was absolute dreck put something of a kibosh on things.  The sensible thing seemed to be just to write off September and move on.  So now I’m back with the oft-cited classic — and so inevitably hard-to-find outside of the USA, where the lovely Mysterious Press have published it — locked room mystery Death of Jezebel by Christianna Brand.  Why this one?  Well, it’s supposed to be awesome and I’m trying to get into Brand, having been thoroughly meh’d by Green for Danger (1944) and slightly more taken with Suddenly at His Residence (a.k.a. The Crooked Wreath) (1946).  So, how did I fare?

Well, following the impossible murder of a much-despised starlet mid-show in a watched tower which no-one could enter from the front (the audience would have seen) nor the rear (the door into the room behind was locked and guarded), I spotted the killer almost instantly.  Several chapters of cunning misdirection followed, but I was not fooled.  Then it turned out that they provably couldn’t be the killer, as an aspect of the case definitely excluded them.  Dammit.  To cut a long story short, rinse and repeat this for the rest of the book, because I was lead on a merry chase right up to the final final final revelation when the sheer audacity of Brand’s flaunting of two massive clues right in your face for ages made me laugh like I haven’t done since the conclusion of John Dickson Carr’s The Man Who Could Not Shudder (1940).

It’s all the more impressive since, before the book even begins, you get a list of eight people, one of who dies in the prologue, and you’re told that two of the others die and a third is the killer.  So for solidly two-thirds of the book you know it has to be one of five people, but I would be amazed if any reader legitimately figured it out with more than guesswork.  Brand Poisoned Chocolates Cases it perhaps a touch too far in the rounds of accusation and counter-argument, but for sheer, unadulterated classical detective fiction plot and counter-plot you can really do very much worse.  The lightly-combatative interplay between her two sleuths, each eager to get one up on the other, will recall Case for Three Detectives or The Murder on the Links, but this was the Batman v. Superman of its day and so both of them must emerge with some newfound respect for the other and contribute to the conclusion of the case, and Brand handles this with the most superb of light touches, too, without the need for any grandstanding, able to play them off in quiet moments that resonate perfectly.

Are there any problems?  Well, there’s one aspect of timing with the solution that seems a little off — surely it would take more than a couple of seconds to [REDACTED] the [REDACTED] — and I had no real sense of the setting beyond the vague physical location of things (the arch, the tower, the stage) relative to other things.  Additionally, Brand persists with sudden wrenching changes of viewpoint without warning that leave me feeling a little dizzy.  But it’s nothing that ruins a superbly-constructed take on the impossible crime.  And even the touches that frustrated me previously — the persistent, flippant hypocorism “Cockie” for Inspector Cockrill, say — didn’t seem as intrusive now as before.  In fact, her writing shows a marked maturity when dealing with the business of dying and fear…

Inspector Cockrill doubted whether people in these disillusioned days died proudly and happily — even for their country: but women were always sentamentalists.

…which then turns without warning into some of the most wonderfully light and breezy phrasing probably ever found in print:

The knights chorused in plushy voices made plushier by RADA that this was indeed so; and so were dismissed to their homes and eventually from the case. … There was no use cluttering up the case, thought Charlesworth, with impossible suspects.  They had quite enough to go on with. 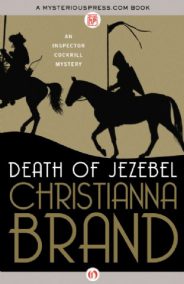 So, in short, it’s a triumph which won’t blow you away with its atmosphere but deserves to be more widely available and just about lives up to its reputation.  It’s interesting to note that the translator of the original French edition apparently didn’t understand Brand’s solution and so made up their own which resulted in the book being castigated in the country that had given the world Noel Vindry, Pierre Boileau and Gaston Leroux.  Honestly, having now read it, I don’t see the problem: yes, there’s an expectedly nefarious take on the circumstances, but it’s actually a quite beautifully simple solution that builds on a key event earlier in the book and so should be simple enough to follow.  Maybe they got their translator from the same agency that provided the sign language guy from Nelson Mandela’s funeral, I dunno, but if anyone has any perspective on this or can add any extra information I’d appreciate it…

I submit this review for the Golden Age Vintage Cover Scavenger Hunt at My Reader’s Block under the category Building (other than house). 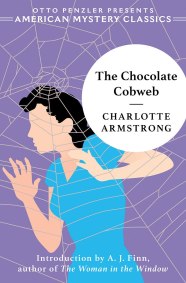 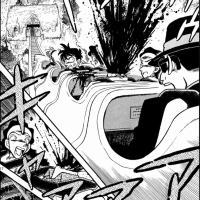