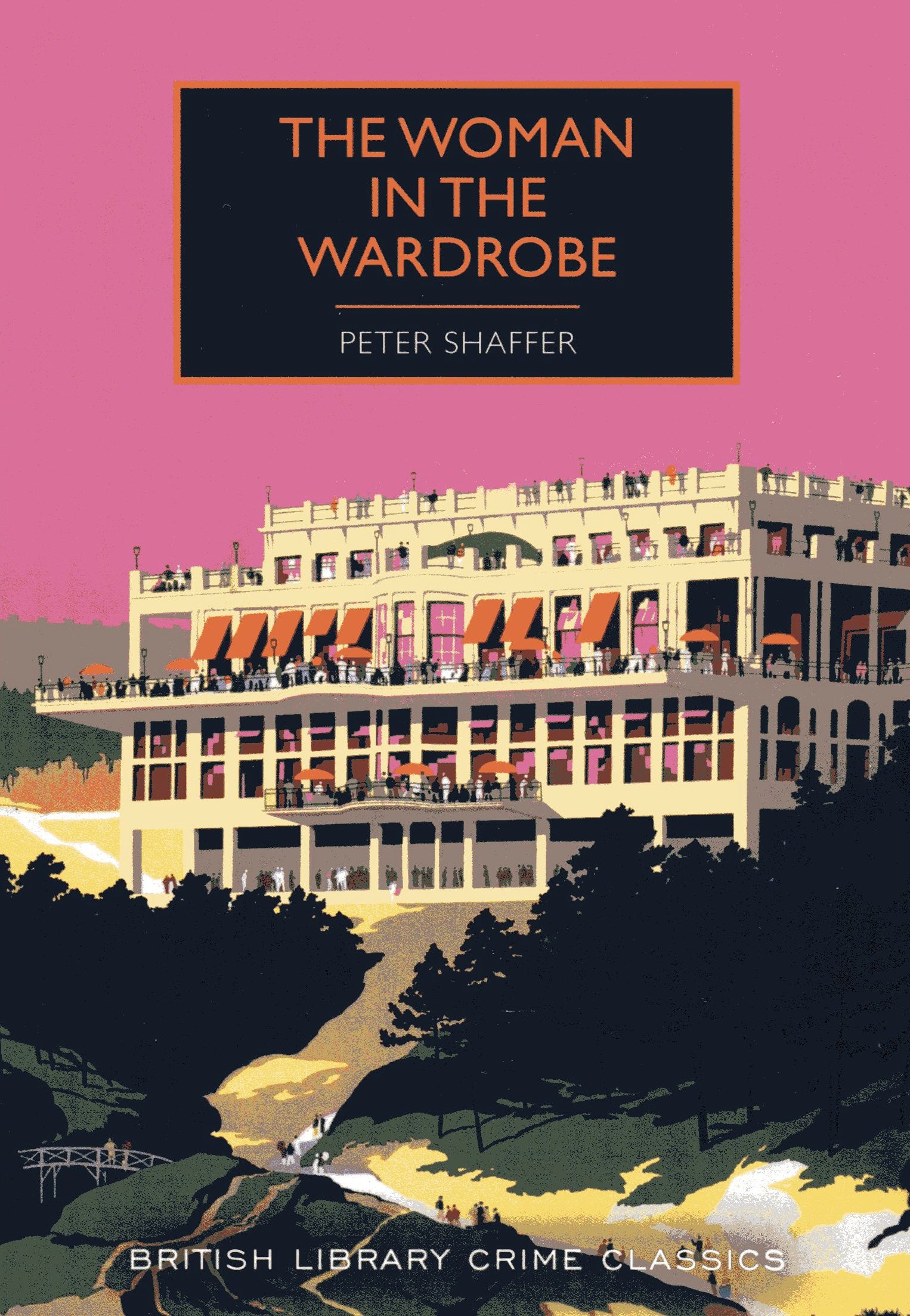 The one thing a book cannot guard against is the expectations that build up around it — and the rarer a book proves to be, the more apocryphal its contents, the higher those expectations tend to rise. The Woman in the Wardrobe (1951) by Peter Shaffer has been staggeringly unobtainable for decades now and, with no less an authority than Robert Adey promising “a brilliant new solution” for its locked room murder, had much to live up to. We can’t blame the book for the solution not being new — not even slightly, Bob — but we can blame it for the flaws that disappointingly crop up in several key regards.

The first half is fun, if a little muddled: figures climbing in and out of the windows of a seaside hotel, a dead body in a blood-soaked room where the door and window — having provided both ingress and egress for at least two people only moments before — both locked, and the eponymous young lady found in the stated location. Cue Mr. Verity, an amateur sleuth in the self-aware mould, who through acquaintance with the police is able to remain on the scene and at the heart of proceedings after having discovered the murder and apprehended at least one of the suspects in the opening chapter.

The expected trappings are all in place, then, and Shaffer has a good line here and there with some trenchant observations and the odd knowing description that puts a foot into the “comedic crime” category, possibly as a way of excusing the infelicities of the second half. A council of war is called just before the halfway stage, a solution proposed that covers the possibilities and is then rejected for no reason other than Shaffer doesn’t want it to be the answer — I do not understand why the contents of that telephone call are so damaging to the solution built up at this stage — and we embark on the second half of the book.

The best I can say about the second half of The Woman in the Wardrobe is that it definitely exists. The problems of the first half are editorial and minor in a manner that can be excused — I’m really not a fan of the overly twee drawings of the main characters, least of all when Mr. Cunningham is described as “a man of about forty” (my age!) and appears solidly two decades older in the sketch given — but the second half is simply all over the place. It’s clear that this would have been at best a good novella, or ideally a superb short story, and has simply been padded and then padded again to make 180 pages of text so that it technically qualifies as a novel (though The Dead Shall be Raised (1942) by George Bellairs is a similar length and only got published as half of a twofer in this same series, so for some reason that didn’t qualify as a novel).

Take Richard Tudor — please, take him, and throw him literally anywhere — who is amusing at his first appearance (“I have the documents to prove it!”), surplus to requirements at his second, and a tedious anchor on the narrative thereafter. Does it serve any purpose that he goes with Mr. Verity to the post office so Verity can fail to send a telegram to Syria? No. Is it even interesting? No. Ask these two questions of most characters and events in the second half and you get the same answers. There’s also the small matter of gunshots apparently being silent or deafening as the plot requires and, possibly the thing I hate most about this style of puzzle plot, the way in which blood knows how to behaves and where to appear so as to save the big surprise of the solution for the final pages (John Dickson Carr was guilty of this, too, so this isn’t just me deliberately picking fault with Shaffer).

And that solution is itself problematic, not least because the midway answer is perfectly valid and, if you want to dismiss that, only one other sequence of events will explain the situation. And, while for the none-more-well-versed Adey not to recognise this solution as simply three old tropes piled atop each other isn’t the book’s fault, it’s a shame that the very workable first solution is discarded for what turns out to be the false adult of three kids on each others’ shoulders in an overcoat. And, when all’s said and done, it’s not really worth the piling of coincidences required to get us there, some of which become too contrived for even the Carry On… movies.

Before anyone gets too defensive on the grounds of “Well, it’s is a comic crime novel, you know” I’d like to point out that for all the well-handled comedy in the works of Edmund Crispin his plots still exercised internal logic. As a fan of the puzzle novel, and the classic detective novel in particular, reading The Woman in the Wardrobe was honestly the first time that I could understand someone in the 1950s picking up that type of book and simply finding it wearying and unappealing — stuffed full of the farcical elements that would end up so popular on stage and screen, but inordinately difficult to reconcile with a world that was surely bored of this sort of thing by now. There’s no sense of time or place, and the unstructured meander to the final revelations seems curiously devoid of purpose…it belongs nowhere, and brings nothing interesting to a genre that has every right to expect more. It feels very much a case of an author having a great time and not caring if the audience is in on the joke.

However, once again it seems that practically everyone else who has reviewed this book disagrees with me, and so perhaps I’m the one who’s missing something. I can’t begin to tell you how delighted I am that I was able to read this for a mere £8.99 — in fact, I think Watersontes had 25% off the price, so I paid even less than that — rather than the hundreds and hundreds of money it would have otherwise cost me (well, no, it wouldn’t, because I can’t afford those prices, but you get my point), and I’m a firm fan of reading a book and knowing it’s not to my liking over decades of it remaining unobtainable and so never knowing. The Shaffer brothers apparently resisted plenty of efforts to get their three detective novels reprinted over the years, and it would be marvellous to see How Doth the Little Crocodile (1952) and Withered Murder (1955) follow in due course despite the disappointment I experienced here. I mean, things can only get better after this, right?

John @ Pretty Sinister: Overall, this is a fine pastiche of the traditional detective novel. So well done in style and genre technique I got faint whiffs of classic authors in the plotting of Shaffer’s book. Whether or not any or all of them were inspirations for The Woman in the Wardrobe I leave to your imagination.

TomCat @ Beneath the Stains of Time: The Woman in the Wardrobe is a very short, tautly written story with the page-count padded out with some nice sketches of the main characters by Nicolas Bentley. So it really had no right to be anything more than a comedic curiosity, but the explanation to the locked room, in combination with the identity to the murderer, turned it into an unmitigated classic. A superb and truly original locked room mystery!