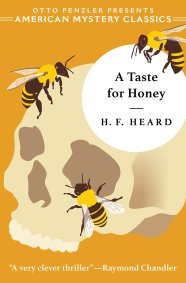 It’s difficult to know where to begin with A Taste for Honey (1941), the first of three ‘Mr. Mycroft’ novels by H.F. Heard.  The core conceit is delightfully barmy — I shall avoid naming it in this review to preserve it for the curious — and played with an impressively straight face, but beyond that there’s really only a short story’s worth of content here, spread thinly over 189 generously-margined pages.  With only one plot-line, only really three characters, and nothing to widen the universe or engage the mind in any meaningful way past the halfway point (when the ending will already be painfully obvious to anyone), this really is just a latter-day Holmes pastiche with verbal diarrhoea.

It starts very entertainingly indeed, with the gustatory predilections of the (perhaps appropriately) waspish Sidney Silchester bringing him in contact with Mr. and Mrs. Heregrove in search of honey.  They, it seems, are the only people in the bucolic surrounds to which Silchester had removed himself to live out his days as unmolested by social graces as possible who have any luck in keeping bees, and so a monthly transaction becomes habit, much to Silchester’s misgivings:

I feared she might make [lending me a] basket an excuse for a call; at the best a bore, at the worst a beg.

Problems arise when Mrs. Heregrove is killed, the circumstances leading Silchester to hunt for a new apiarist to sate his sweet tooth — seriously, this guy goes through a lot of honey, and nothing is ever made of it…Roald Dahl would have given this a twist, Heard just views this degree of consumption to be normal — and thus comes upon newly-arrived Mr. Mycroft and the bees with which he is experimenting.

From here, we must be more circumspect, but suffice to say that it’s the point where real interest begins to develop, and yet it develops upon such a narrow line that you wonder why Heard didn’t trim the excess 40,000 words and send it to a magazine.  After the, er, key development, do we really need Silchester speculating for four pages that he’ll be sent to the madhouse if he tells anyone about it?  The holding forth over a meal about Russia and…whatever the hell else that’s about…does that add anything?  We already know (prior to the former) the Silchester is a brittle neurotic who will always resile to the perspective of wounded dignity whenever anything upsets his routine, and (prior to the latter) that…well, in all honesty, I can see no purpose for the latter at all except the book was only 180 pages and needed some more stuff in it.

Throughout, however, it is delightfully written, with Silchester a firm contender for Most Pompous Arsehole You Nevertheless Quite Like in Fiction.  Take, say:

I’ve said I know little about bees but of course I knew they could, like most spinsters in crowds, at moments temperamental and even neurotic.

[A]n excited and talking woman seems to me to combine the characteristics of all the violent and rapid forces of nature and man.

Mr. Mycroft might not fare as well, and that might be because Silchester’s interest in him is so perfunctory — at the end, when Mr. Mycroft tells his real name, it is hilariously fitting that Silchester has already forgotten it by the time he comes to ‘write’ the story and so cannot tell us what it is.  While I’m not entirely sure that character in question would ever have much cause to utter things like “A clue is not a conviction, and the sharper you are at getting clues, the surer you may be that a jury will not see the strength of the evidential chain”, there are at times glimpses of the debonair brutality that could arguably typify him: the blunt (and, er, baseless) telling of what happened to the horse, for one, and Silchester’s realisation that “the problem…was to him one of general interest, and my fate was only one feature in it”.

It’s a shame, too, that Heard invokes Holmesian comparisons by being coy about his character and yet engages in virtually no detection.  The scheme is wild, as I say, and the essential idea behind it surprisingly well-considered — and sketched with appropriate detail and gaps, since we don’t need to know everything — but Mr. Mycroft just knows stuff and just finds things, and just deduces without us being privy to anything beyond the acid stains on some trousers.  The thinness of plot might reflect the paucity of any deeper efforts on Heard’s part, but that only serves to highlight that really the only purpose of invoking the Holmes name is because what you’ve written isn’t good enough to stand on its own.  At least we’re saved an Irene Adler reference, I suppose.

I’d like to have more to say, but there’s so little here left to comment on.  Irony dictates that I should insert several paragraphs of no particular import for you to struggle through just so I reach whatever word count seems suitable, but let’s at least learn from this experience and get out of here, eh?  The fact that I haven’t crammed this review with bee puns really tells you all you need to know about my feelings.