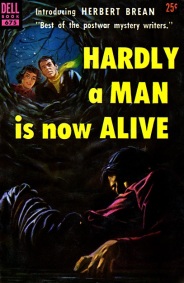 Three books into the seven-strong output of Herbert Brean, I’m going to suggest that he’s one of the most unjustly-neglected writers of the latter-GAD era — that “latter” prefix being key.  Brean’s plots are dense enough for the puzzle fiends of the 1930s, and his social milieu more than matches the requirements of the post-GAD 1950s hankering after domestic suspense, but each school will be disappointed by how much of its rival is present.  Thus, puzzle fans lazily insisting he’s in the same bracket as John Dickson Carr and realism fans keen to play up his HIBK credentials each sell him as writing sorts of books he never wrote, and everyone ends up disappointed.

Hardly a Man is Now Alive (1950) is a superb genre hybrid, effortlessly bridging these streams.  The dual-timeline narratives of the American Revolutionary War of 1775 and the multitudinous mysteries of the 1950s provide plenty of naturalistic detection and intrigue and deduction, alongside which a picture of smalltown American life builds easily, reinforced by a keen sense of the history that pervades everything.  If you want to stretch a point, the arrival of photographer Reynold Frame and Constance Wilder in Concord, Massachusetts ahead of their imminent marriage hints at the burgeoning new school of crime fiction Brean is courting, but the old-timers who prove so key to unravelling events keep them and the narrative firmly entrenched in the importance of what came before.

In the modern day, the problems that present themselves count among themselves the sudden, unexplained vanishing of an academic from the local guest-house — not impossible, y’understand, despite it being ascertained that he’d’ve been overheard leaving — and the possibly unrelated discovery of a body in a well.  It’s in Frame’s deductions about the presence of said body that we come the closest to pure detection, with some superbly rigorous reasoning explaining effortlessly many of the aspects that seem confounding; and the way he reveals the discovery of the body has about it the twinkle of John Dickson Carr’s irrepressible Henry Merrivale goading a suspect in full view of the innocents (hey, they’re not in the same bracket, but they wear the same carpet slippers).

The other modern mysteries — a vanishing and appearing lamp that supposedly implies the presence of a Revolutionary War solider who died in the room it appears, and the sound soldiers marching to a beating drum — pull our focus into the past, and bifurcate the focus still further into something approaching a biblio-historical mystery: if Percy Nightingale fled from the British troops to die in that room, why did he do so?  The sense of history pushing through is neatly managed, with the location of being as deliberately chosen as the characters we meet early on: the 104 year-old John Annadale who is due to lead the marriage ceremony and who “had long, long since outlived his span of years.  Yet here we was still, a fragile shell in black sackcloth and string tie, mind and eyes still burningly alive”, and guest-house proprietor Tom Satterthwaite who greets Frame by shaking a “thin hand that was like a bundle of wires”.

Reynold Frame is a fascinating protagonist, an everyman with no delusions of involvement who, simply paying close attention, is able to cut to the heart of most of the mysteries with prodigious intelligence.  His affinity with the older folk tales surrounding Percy Nightingale could well be established in how he and Annadale quickly establish themselves as “two men who understood each other across a great gulf of years”…yet, equally, Frame is the first to suggest that there’s nothing special about his knowledge or insight, he just has the advantage of coming at these stories with fresh eyes.  I’m in agreement with TomCat’s review, linked below, in feeling that a Challenge to the Reader (which, by 1950, was doubtless seen as an affectation too far) would have been wonderful to drive home just how easily Brean sirs in the various clues and suggestions, and would really make Frame’s accomplishments stand out.

Brean also gives us a good mix of types that would have been put to various uses by other authors, so clearly can we see them: Tom’s sultry daughter Retty would have orchestrated the killing of more than a few men in the hands of James M. Cain or Jim Thompson, and the shrill, emotional Maria Carswell is a showy frock away from being the object of Christianna Brand’s sympathies (or Ngaio Marsh’s skewering).  Retty’s fiancé, the boorish dreamer Phipps Daniel IV is the preppy non-entity right out of Ross Macdonald, and, hell, the HIBK Suspense tradition holds strong in Frame’s night-time examination of the house’s loft space (accessed through the bedroom of another guest…), and we even get some Craig Rice-ian quick comedy in the shape of W.M., a dog with psychosomatic heart trouble.  There’s almost too much happening genre-wise, and it would be possible to overlook how brilliantly Brean pulls it all together while throwing footnotes with history, recipes, and callbacks to Frame’s previous cases at you.

The whole thing is majestic and exhausting and wonderful, and I’d only really fault it for the epigrams that begin each chapter and feel like a sort of snooty literary pretension that the skill on show does not require.  I learned such tidbits as the brother of a grandparent is called — in Mass., at least — your Grand-Uncle (in the UK, it’s Great-Uncle), got a treatise on how to make a martini, and will happily patronise any diner that will serve me a “peanut butter and bacon sandwich”.  This is a great picture of the genre at a time of huge change, and commends itself for that reason alone, but more importantly it’s swift, intelligent, surprising, huge fun, and written with brio, charm, and undeniable skill.  Good luck finding a copy, but grab one when you do.

I don’t normally talk about the editions of the books I read, because I can rarely find anything to say, but, on top of being a great book, I learned a lot from my copy of this.  I have not the Dell edition pictured above — I wish — but instead a jacketless Heineman hardback edition with red boards.  What’s interesting is that it comes from the Boots Booklovers Library…which I’d never heard of, and which turns out to be sort of fascinating.

Boots, for non-UK readers, is a high street chemist apparently not unlike CVS or Walgreens in the US, and to find that they had their own library arm for years is a revelation to my young soul.  The cover of mine is stamped with the shield shown right, the “Boots” of which is the exact font still used on storefronts across the country…that being what caught my attention in the first place.  You can read about it online, but my favourite detail is that at the top of the spine there is a hole with a reinforced metal eyelet, the sort of thing a treasury tag could be passed through.  Why do that?  Because the memberships cards were themselves on treasury tags so that you could fix your card through the spine of the book and use it as a bookmark!  Inspired!

They say we live in more civilised times these days, but I’m not so sure…

Ben @ The Green Capsule: There are enough mysteries to keep the book moving, and Brean dishes out solutions along the way.   Plus there’s a seance, a vanishing centenarian, and a plot line involving a lost manuscript by Ralph Waldo Emerson and Henry David Thoreau.  It makes for an engaging read, and similar to Wilders Walk Away, Brean dabbles the story with footnotes and sidebars.  You’ll learn all of the considerations that go into making the perfect martini, dust off your grade school history, and even walk away with a full recipe for pudding.  It’s fun stuff and there are interesting tidbits tucked throughout the pages.

TomCat @ Beneath the Stains of Time: On the surface, Hardly a Man is Now Alive appears to be an incomprehensibly complex, maze-like detective novel with numerous, interconnecting plot-threads stretching across two centuries, but Brean untangled them with ease and the result is very satisfying – showing how childishly simple everything looked beneath all those layers of obfuscation. Nearly every plot-thread, except for the second historical mystery, were adequately clued or hinted at and the chapters are littered with opening quotes and informative footnotes. Really, the only things missing were one or two floor plans and a challenge to the reader.