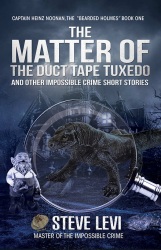 A lot of impossible crime novels published these days have, let’s face it, about enough impossible crime content for a short story.  So a short story collection seems like a sensible thing to try, right?  Even one that does put ‘short stories’ on its cover and then call itself “a novel” on the back.  Right?

The opening story, ‘The Matter of the Duct Tape Tuxedo’ sees Captain Heinz Noonan of the Sandersonville Police Department in North Carolina consulted by a midget — “Everyone thinks they’re a comic when it comes to midgets.  I am a midget, by the way, not a dwarf.” — whose house has been robbed by Bigfoot.  Except the Bigfoot thing goes nowhere and instead it’s simply one of a series of robberies in the small Alaskan town where seemingly random knick-knacks have been stolen.  Noonan has an Alaskan wife — the reader is told about her twice in two pages — and this seems to be why he is being consulted, as “I wanted this case to be taken seriously”.  There is…zero logic in the conclusion Noonan comes to, and the supposedly impressive reasoning he strings it all together with could result in several equally implausible solutions.  It’s also not even vaguely an impossible crime, so picking this as the title story and putting “and Other Impossible Crime Short Stories” after it makes me wonder if a comma or two has gone missing.

‘The Matter of Louie the Lobster’ asks the question “How could a diamond ring appear in a locked lobster tank?”, and Noonan proffers a suggestion — “Anybody could have jimmied it open” — which is actually less disappointing than the eventual answer.  Maybe this is meant to be impossible, but it’s too stupid to put in that company.  I want to appreciate what Levi’s doing in trying to pull disparate, apparently unrelated information together into a startling conclusion, but his reasoning is so, so bad — would a magician really use a $25,000 ring in their stage act? — that it bears repeating that just because your characters don’t immediately spot the solution doesn’t mean it’s an impossible crime.  Levi also has no editorial eye at all: we’re told that Louie the Lobster’s owner is called Avalon Lone “with a silent e” three times in two pages (and, honestly, does “silent e” mean the name is pronounced “Lon”, or so that is rhymes with “phone” rather than”phony”?).  We also get Heinz Noonan “wearing a tie!!!”, so things must be slow in NC if neckwear warrants three exclamation marks.

I tried, I promise I tried, but ‘The Matter of the Reappearing Coelacanth’ was the point where I gave up hope of this collection being any good.  Charged by Commissioner Lizzard with finding out the provenance of the eponymous creature, believed extinct for millions of years and yet caught off the North Carolina coast in the last few days, the key question of, like, how this thing was still alive is never addressed — doubly odd, given the motive uncovered.  Nothing is explained, and sentences like “The story at the National Park was as bureaucratic as a sunrise” (?!?) puzzle the will and make us rather bear the ills we have than fly to others that we know not of.  It’s not fun, it’s not clever, it’s not even trope-ridden and predictable, it’s just bad.  At this stage of things, the only reason I can see Steve Levi calling himself a “Master of the impossible crime” on the cover of the book is because some hard-up university offered a post-grad evening class.  I should write another 30 words to keep the total consistent across the stories, but this is shit and I refuse to waste any more time on it.

“Someone go and wake the others…”

So, onwards to ‘The Matter of the Reverse Dinner Bell’ and the proving of the thesis ventured above that this collection is no good.  The sole point of this story seems to be that one of the police officers has a funny name — snarf, chortle, etc. — since it is (I’m not kidding) mainly about that guy telling Noonan a story he doesn’t believe (and we don’t hear) about crocodiles chasing rats on an island and being scared away by tripwires with bells attached to them.  Then Noonan tells a story (that we do unfortunately hear) about a monkey feeding a crocodile apples and something about the crocodile’s wife insisting the crocodile kill the monkey and steal its heart.  The payoff?  “Well, both are tales”.  I paid money for this.  Actual money, that I worked pretty hard for.  This isn’t even bad any more, it’s become fully insulting.

‘The Matter of the Evanescing Elixir’ might have a good idea behind it — the theft of 8,000 gallons of distilled glacier water from a vodka factory — but it’s most interesting for the typos that now being to intrude on the text with greater regularity.  Such as Harriet, Noonan’s female secretary, saying that the thief was definitely a man and that a woman would have gotten away with the crime because “women are smarter than me.”  Mind you, given that she appropriates two bottles of vodka and promises to return the empties to Noonan “tomorrow”, that’s probably not a typo and she’s just too drunk to know what she’s saying.

Before I even read it, I suspected the most interesting thing about ‘The Matter of the Purloining in the Peninsula Country Land Fill’ would be its title.  But, reader, I was wrong.  The most interesting thing about this story is that it thinks digging “a circle 30 feet across to a depth of four or five feet” would be equivalent to “something like 300 cubic yards”.  No.  You’re a looooong way off, Steve.  It’s actually about 125 cubic yards — and, sure, maths nerd, who cares, etc., but if you’re not even going to get something as unequivocal and easily checked as your mathematics correct then why is anything else you do worth paying attention to?

“I think you should have a rest, Jim.”

At least we get something that sounds like an impossible crime in ‘The Matter of the Penny-Ante Kleptomaniac’:

“Where have the thefts been taking place?”

“In locked rooms within secure vaults in a passkey protected building.”

And so, perhaps inevitably:

“Three weeks ago a desk blotter was stolen.  Two weeks ago it was the carafe from the coffee maker.  Last week paper tray from the copier.”

“These items were in the vault?”

“No.  The locked room where the vault is located.”

Not so much “in locked rooms within secure vaults” then, Steve, as “in a room that contains a vault”.  Very different.  Oh, well, at least it’s a locked room and so access is restric—

“Lots of the family go in and out of that room all the time … Anyone who has to work in the room opens their vault drawer and takes out what they need.”

But you’ll at least have checked the vault drawers for the missing items, ri—

“I have not checked the empty [and unlocked] drawers.”

‘The Matter of the Phantasmagoric Highbinder’ posits the problem of an apparently ghostly figure appearing and then disappearing on the security footage of a manuscript archive.  Apparently no-one in the entirety of San Francisco law enforcement thought of the possibility of turning the camera off and on again, and so had to consult this genius from across the other side of the country.  Have none of them seen Randall and Hopkirk (Deceased)?  The motive here is very, very good.  But everything else is insulting.

In Levi’s defence, he’s at least trying to get some interesting motivations in these last few stories — in ‘The Matter of the Cozened Gomes’ Heinz again reaches his conclusion based on nothing approaching actual reasoning, but the possible motive for lots of gnomes stolen a year ago and now appearing in clusters around town isn’t bad (always — ha — assuming it’s correct…).  The real problems here are the sort of laziness in editing and writing that dog self-publishing and give a bad name to the authors trying to do this properly.  The gnomes are two feet tall, then they’re a foot-and-a-half, and Brando Tagaloalagi is named such because “my mother was an aspiring actress and fan of Marlin Brando” — the sort of fishy occurrence that would be a clue in the work of a half-competent author…and isn’t even an unfortunate typo here since it’s repeated on the next page.  Also, Heinz Noonan hates his mobile phone — grrrr he hates it, oooo how he hates it — and has christened it “the beast of Satan” to show what a rootin’ tootin’ down-to-earth type he is.  Though since he appears to drink red wine while eating fish — chilled red wine, people — I’m inclined to believe he’s actually a serial killer.

Finally, finally we have ‘The Matter of the Fattening Igloos’, which is about as close as we get to a decent story: sealed cargo containers being flown across the country are double the weight at the end of the journey that they were at the start.  We still get simply incomprehensible errors…

“Yes, Mr. Theobold,” Noonan accented the “a” in the name.

…and infuriatingly pointless repetition provided this time by the hi-lariously-named Colonel Sanders telling Noonan three times that “he’s from Kentucky, we’re out of Dee-troit”, but at least the problem isn’t obvious or trivial, and Noonan does some actual investigating from various ends.  Then he jumps to a conclusion based on information we weren’t provided and resolves the apparent impossibility by contradicting something he expressly made a point of labouring earlier.  It’s the best story in here, but that’s like being the lead soprano in the Klan Khoir.

What’s especially annoying about this collection — quite apart from how much Levi charges for his books on Amazon — is the doorknob-fornicating idiocy of the errors and oversights made.  If you’re going to charge real money for your fiction, get it proof-read, get three or four opinions on the editorial content, don’t mangle the name of one of the finest and most famous actors the world has ever seen — in short, do the basic stuff that it’s fair to expect from paid-for content.  Entirely independent of the quality of the stories, get your writing tidy, your grammar correct, your punctuation in the right places, your sentences comprehensible, and your shit together.

This was honestly terrible, one of the worst books I’ve read in a long time, and perhaps the first “I can’t bring myself to look away” experience of this blog.  Please, Steve, stop calling yourself a Master of the Impossible Crime.  It’s a label that means something to some of us, and you’re stinking up every section of the Venn diagram that you occupy — self-publishing, impossible crimes, crime fiction, the Genius Detective, the Witty Sidekicks, clewing, fair-play, and crikey knows what else — just be being there.

This was so bad, I’m going to continue these Adventures in Self-Publishing into next month, just so that this is not the impression we leave behind us.  Open the window, spray some air freshener around, close the door, and give it half an hour.  Jeepers, I’m gonna need to find something good for next week…