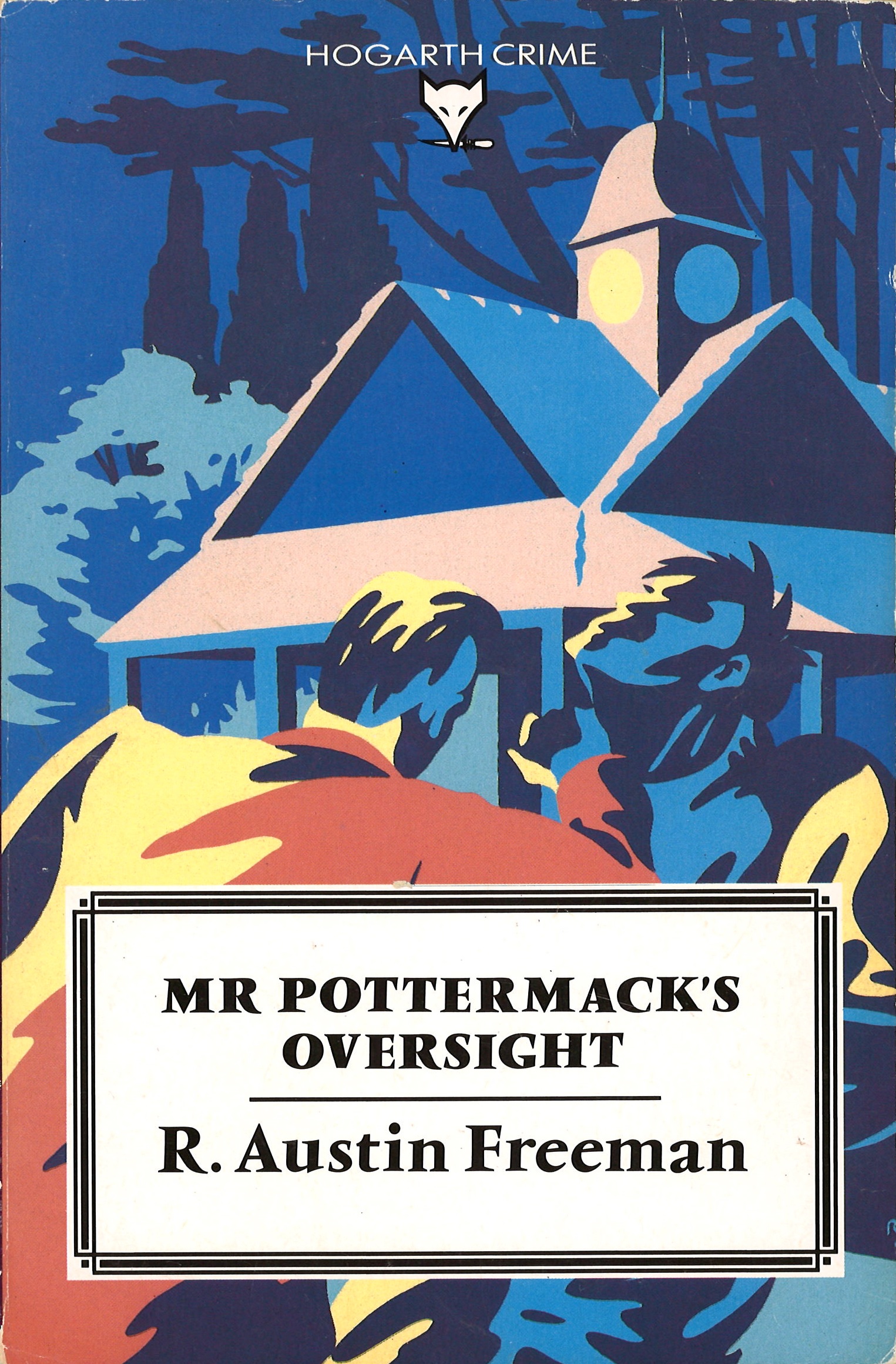 When digging his garden to lay a foundation for a new sundial, quiet, unostentatious bachelor Marcus Pottermack uncovers a previously-unknown well.  That same day, he receives yet another demand for money from the man who is blackmailing him, and it’s only a matter of time before one problem is used to solve the other.  And when curiosities about the man’s disappearance are raised in passing with Dr. John Thorndyke, it’s only a matter of time before that pillar of truth is on the trail of quiet, unostentatious Marcus Pottermack.  And yet, for all its conventional-sounding setup, Mr. Pottermack’s Oversight (1930) is a delightfully unconventional inverted mystery.

In all future discussions of “Which book comes closest to perfection only to fluff it at the last minute?”, you can expect me to harp on about Mr. Pottermack — because it is delightful, ingeniously surprising, unexpectedly clever in how it shuffles the anticipated permutations of an inverted crime novel, and redolent with the sort of frustrated ambition that makes its protagonist one of the most sympathetic murderers in fiction.  As my first venture into the work of Richard Austin Freeman,  I was honestly kept in suspense as to the eventual outcome, not knowing how fully he would kowtow to the Victorian moral expectations which are at once entirely thrown over and obliquely omnipresent (the latter no doubt a result of the prose reading like someone introduced Wilkie Collins to the concept of “editing”).  And then in the final chapter…ugh.  But we’ll get to that in due course.

The first surprise is the lecturing-hectoring tone which starts proceedings:

Criminologists of certain Continental schools are able to give us with remarkable exactness the facial ad other characteristics by which the criminal may be infallibly recognised … But in this backward country…we have to admit that the British criminal inconsiderately insists in being a good deal like other people.

Now, you and I, we’ve read plenty of novels which often cram their best writing into the opening pages and then settle down to gently bland you to tears, but part of the joy I found here was how consistently Freeman sticks to this tone, and it is half of the elixir which elevates this from the also-rans,  Witness Mr. Pottermack initiating some aspect of his artifice by “prepar[ing] to set forth along that perilous track beaten smooth by the feet of those who do not know when to let well alone” only for the result of his efforts to be that “the fat was in the fire and he waited with constantly strained ears to catch the sound of its sizzling”.  If not on every single page, I’ll wager that every single chapter gives at least a couple of occasions to be charmed by Freeman’s verbiage (“One would not have regarded it as a thrilling occupation…”).

The other half of the elixir is the multiplicity of delights hewn from the plot.  It’s arguable precisely which oversight the titles refers to, since problems present themselves from the very first: “The annals of crime, and especially of murder, were full of fatal oversights”.  Footprints, money, clothes, and identity are just the opening tranche of problems that must be dealt with before Dr. Thorndyke takes the stage and — in a manner not revealed until the penultimate chapter — unpicks all Pottermack’s rigorous and ingenious scheming in half an hour with nothing more than a microscope and a set of photos.  By the halfway point, after being aware of the problem for two whole chapters, Thorndyke is all but certain that murder has occurred, how and where it was done, whodunnit, and whydunnit into the bargain.  John Thorndyke, ladies and gentlemen, does not fuck around.

At just after halfway, in chapters 10 and 11, comes the point where this sort of book lives or dies, and holy cow does this become utterly, utterly wonderful.  Anyone who spoils the direction taken in the second half — and especially the reason for that direction — should be dumped in a well themselves, because it’s a development that elicited an actual yelp of delight from me as the pictures slowly formed in my mind as they were confirmed on the page.  It makes me grin even now to remember it, and off we go on another round of scheming and tireless ingenuity, and so Thorndyke ends up in the mix again — the way he reaches a certain conclusion, again with lightning-fast reasoning based on Freeman’s own medical knowledge is wonderful — and he and Pottermack are set to collide…

Thorndyke is a fascinating character on this evidence: given the profession of a “medico-legal adviser” to an insurance company, he comes across as a sort of proto James Bond with his little gadgets and independent brief to roam and enquire.  He’s highly-regarded due to the brilliant insight he can bring to a situation, and yet thoroughly disdainful of any unctuous treatment on this account; uncomfortable with being given a very visible seat at an inquest, he seems to view everything as an interested yet passive observer — “allowance had to be made for special circumstances”.  And his (perfectly valid) reflections on the “perverting effect of unconscious bias” might just be the first time I’ve ever encountered a novel from this era actively criticising such an undertaking…and no light criticism, either — Freeman flays it to within an inch of its life.

The convoking of Thorndyke and Pottermack for the final showdown is wonderful for how Pottermack’s dissembling is laid bare, and what is doubtless the eponymous oversight is emblematic of the sort of perspective Thorndyke has shown throughout (that thing with the screws at the inquest — I mean, that’s both wildly unbelievable and yet staggeringly, embarrassingly obvious).  It’s a humdinger of a meet, and one that ticks every box…right up to the aching, laborious, recapitulatory tedium of Thorndyke restating — divested of any of the charm in such abundance elsewhere — all the information we already know.  The functional, deathless prose with which Freeman communicates Thorndyke’s findings as if relating characteristics of moths pinned to a board is probably fitting for the way that great man operates, but to wade through it a second time when the key question remains unanswered and I was desperate to know the answer took, unfortunately, the last gleeful sheen off this for me.

But that is a mere 12 pages out of 311, and all the foregoing delights in so, so many ways (I even learned a new phrase — “short commons” — and that “mizzle” far from being a weather condition used to mean “go on the run”).  I’m very grateful to Ken for recommending this one, and R. Austin Freeman can add himself to the queue of GAD authors who have thoroughly piqued my interest.  I dunno how available the man is but, as far as this blog is concerned, John Thorndyke Shall Return…