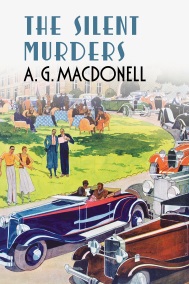 Aaah, the serial killer of yore.  With a sizeable proportion of GAD ne’er-do-wells restricting themselves to one victim, and a lot of them adding a second to help out a floundering narrative, it’s often easy to overlook that classic era detective fiction produced more than a few really dedicated murderers.  The Silent Murders (1929) isn’t the first, though it is quite an early one for GAD, and so while the usual punctilios are observed — and may feel a little hoary nowadays — it pays to remember where you’re walking. As an entry in an under-represented stratum of GAD, this is easily good enough to make you rue the brevity of Macdonell’s detective-esque output.

We have ballistics enough for it to be established that a series of shootings are all perpetrated with the same gun, and enough of a sense of pattern to spot that even the occasional stabbing must link in since all the victims have placed on their corpses a card with sequential numbers written on them.  The first chapter gives us victims Three and Four — a tramp with airs and graces, and a captian of industry (“a much more satisfactory murder from every point of view, except that of the murdered man”) respectively — and so “the public which studies detective stories and is accustomed to the sudden and violent decease of millionaires” begins to sit up and suspect that something rummy is going on.

When a mistake is made in the killing of victim Five — the blameless brother of a widely-acknowledged cad — the Yard arrives in the personages of Inspector Dewar (no first name given) and Superintendent Bone.  The youthful, vigorous, rigorous Dewar and the wise, largely-sedentary, quick-thinking Bone make a wonderful pair, and really help to elevate this novel above also-ran status.  While Macdonell’s callowness shows in the uncomfortable shifting of tones — the funny stuff shows genuine wit, the glimpses of flint-edged steel are suitably gimlet-eyed (see Dewar and Constable Draper about to confront a killer who “habitually carried fire-arms and would have few scruples about using them” on his own turf: “Neither was armed, but they entered the study as if they were going to a tea party”), and ne’er the twain shall meet — the investment in his characters compels this novel to the curious; plot-wise it has dated, but there’s a freshness in the people that’s timeless.

Witness Bone gently reproving Dewar by telling him that a notion of his which has already occurred to the senior man was a good idea “forty-eight hours ago”, or, when momentarily confounded in the presence of a provincial colleague, pulling it out of the fire and informing the lackey that London detectives “are so clever that even our mistakes lead us to the truth”.  Always able to offer some soupçon of insight on the myriad cases that seem to surround him, Bone is a lovely creation: even-handed in praise and criticism alike, and always on hand to carefully put anyone in their place whether they need it or not, seemingly subject only to the whims of his own amusement:

“He was a great reader of books, sir.”

“Well, so are you, so that doesn’t count for much.”

Dewar is something of a bland fish — committed fully to the job, no home life, no internal life to speak of, a sort of proto-Joseph French — but we get plenty of others around him to fill the personality vacuum: Wilkinson, the expert on soil, is a one-scene delight, as is the butler “who had read too many serial stories about impassive butlers to express surprise”, and this whole investigation is kept in good context with asides like:

The ordinary man in the street could see at once through the trick which had misled the professional and, of course, somewhat narrow-minded and hide-bound detectives: [the suspect] was obviously the murderer and the alibi must have been an ingenious fake.  But the police persisted in their delusion and people shook their heads.

And the investigation is well-realised, too.  I make the Joseph French comparison above advisedly, because there’s a hint of Freeman Wills Crofts in the care with which Dewar approaches his duties — nothing like Crofts’ glory in detail, but a good, methodical, believable approach in desperately trying to link together these men (all the victims are male, which might be a clue in itself) who “could never have had business dealing together or even with a common third party”.   And Macdonell does well to highlight the importance of being au fait with every aspect of the case at all times: “At any moment a fact was likely to crop up which would make a connection with one of the facts already in his possession, but if he could not remember what facts actually were in his possession, he would probably miss some vital point”.

Like Crofts, Macdonell uses the nationwide reach of the police force to its fullest, telling the story through one man hunting another, but with the anonymity and evasions of the hunted met by the ubiquity of the hunter and his myrmidons.  A lovely sense of period is evoked, too, with the effortlessness of contemporary writing: acknowledging that “you don’t need to go beyond Clerkenwell” to find gang feuds when an era-appropriate xenophobia decrees such affairs to be “somehow [not] English”, addressing the rarity of someone owning and driving their own car, or listing among a man’s household “a butler and a chauffeur and a gardener and a knife-boy”…what the hell is a “knife-boy”?  And then there’s the ease with which a secondary plot is folded into the main narrative — you’ll know it when you read it — and the shattering conclusion that reaches just after the halfway point.  A very good effort all round.

The nature of serial crime necessarily shortens the opportunity for any deep detection, and the consequent jarring tones shifts would have been ironed out in another couple of books’ time (as would a few odd flourishes that don’t quite add up, like the numbering of the victims…), but on the whole this is a fun, engaging, and promising novel from a clearly talented writer.  I’m very grateful to John at Pretty Sinister for bringing this to my attention — his review is linked below — and must only lament that this volume is part of the Fonthill Complete A.G. Macdonell series which isn’t quite as complete as it might be: reissued in 2012, there seems to be no sign of other titles like The Big Ben Alibi (1930), Murder in Earl’s Court (1931), Body Found Stabbed (1932), etc anywhere online (least of all on Fonthill’s own website).  Yes, they’re available as ebooks, but for old folk like me who’d love a chance to buy them as physical editions it’s a shame to see the promise of completeness unfulfilled.  Maybe if you buy a copy they’ll resurrect the idea, eh…?

John @ Pretty Sinister: Dewar though the junior member of the team is clearly the lead detective of the novel. He is driven and dedicated to his job. A single man who eats, sleeps, and breathes police work he is well liked by all his colleagues. And it’s largely because of the mutual admiration between Dewar and Bone that this detective novel which relies heavily on methodical police work never lags interest and never suffers from “procedural” monotony which is often the case with this subgenre.