Recent years have been very kind to the Golden Age Detection nerd seeking non-fiction reference works.  Indeed, if it didn’t seem like so much of a rip-off of the Reprint of the Year Award Kate runs over at CrossExaminingCrime, I’d be inclined to start a GAD Reference Work of the Year Awards.

The two have already crossed over in a way, since my championing of the reprint of Locked Room Murders (2nd ed., 1991) ed. Robert Adey won the inaugural RotYA last year, and recent years have seen a comparative slew popular reference works — ‘popular’ in the sense of contrasting them with the academic works put out by the likes of Palgrave Macmillan.  Martin Edwards gave us the history of The Detection Club in The Golden Age of Murder (2015), and then took a sweep through the genre in The History of Classic Crime in 100 Books (2017), which I haven’t reviewed on here yet because I honestly don’t know how to go about addressing such a rich and comprehensive listing of so many books I’ve not myself read.  Additionally, Locked Room International have recently added to their reprint of that classic Adey work by publishing a brand new supplemental edition containing impossible crimes featured in popular media since 1991 (it’s to be hoped that this just becomes a rolling project now, and we get supplemental supplemental editions every 10 or so years).

Of course — arguably back before it was cool again — we’ve also had Curtis Evans bringing us examinations of the life and works of Todd Downing, G.D.H and Margaret Cole, Henry Wade, John Rhode/Miles Burton, Freeman Wills Crofts, and J.J. Connington, as well as editing collections of essays in honour of Douglas G. Greene and on the representations of Queer culture in GAD.  Yes, I’m missing out titles and authors — Talking About Detective Fiction (2009) by P.D. James, say — and you’ll be sure to let me know about them in the comments, but I’m not trying to provide an exhaustive sweep here, more just give a flavour of how rich the palette of GAD reference works has become.

And this is before we get to the work of Dr. John Curran, who has carved out an important niche of his own in producing definitive works on the various aspects of the work of Agatha Christie — unpicking the mysteries contained in her many  notebooks, analysing the work of the late, great cover artist Tom Adams — as well as writing a number of introductions to the rafts of GAD reprints we’ve been lucky enough to enjoy of late under the auspices of the (temporarily?) rejuvenated HarperCollins Detective Club.  Today, though, belongs to his most recent book, The Hooded Gunman: An Illustrated History of the Collins Crime Club (2019).

I’ll be honest, I’m not really someone who understands coffee table books.  They reek of a book that someone buys to appear to satisfy an interest without having to actually read — lots of old maps, or paintings by forgotten Dutchmen, or beautiful aerial photographs — and feel more like props in a life that no-one actually leads, the sort of thing left open on a table for a model to drift past while filming a fashionable commercial.  The publisher/lifestyle choice Taschen specialises exclusively in this sort of thing, and I’m astounded at how many people must know someone well enough to willingly spend the money a Taschen book costs on a gift for them and yet not well enough to spend that money on something that actually reflects their personality and/or interests.  And I know there are lots of these people because, even in these straitened economic times, Taschen is somehow still in business.  But I digress.

My point is, the mention of the words “coffee table book” usually kills my interest quicker than the phrase “Michael Bublé album”, and yet I don’t know how else to describe this magnificent undertaking.  I’ve not read the entirety of this book — just like I didn’t read every word in Adey — but I know it’s wonderful, and I’m deeply grateful that the expertise that has obviously gone into its creation was available to make it happen.  The acknowledgements read like a Who’s Who of GAD What’s What, and while this raises the occasional unanswered question — was It Walks by Night, the debut novel of John Dickson Carr, really published in 1929 and we’ve all been misattributing it this whole time? — it also shows how much work has gone into bringing this illustrated history to us.

To take the ‘history’ part first, the opening 30 pages are a rundown of the various William Collinses (I through V) who oversaw the life of Collins & Sons, Ltd from its formation in 1819 through to the 1970s, their move into publishing crime fiction before, during, and after the belle epoque of the Golden Age, and their contribution in bringing so many of the subgenres to public awareness: we are given examples of The Country House Mystery, The Great Detective, The Forensic Detective, etc. published as part of the Collins Crime Club, an imprint denoted by the “Man with the Gun” image that gives this book its title.  As well as a concise and brisk sweep through the important factors — the rise of detective fiction, the importance of well-judged cover art — this is also a very entertaining historical sweep and contains, in a frankly hilarious story about Freeman Wills Crofts meeting with his editor to discuss The Ponson Case (1921), a salutary example of being able to rely on rigorous and personal research.

This brings us, then, to the ‘illustrated’ part — the next 170 pages being a series of gorgeously laid out spreads featuring the cover of every book published as part of the Collins Crime Club.  I attempted to photograph these spreads, but photography is not a strong suit of mine and so I’m going to simply grab some captures that already exist online…but, by heavens, it looks amazing.  Sorted by decade, and with little notes of interest thrown in here and there, it’s fascinating to see all these titles and their covers together.  Chance are, those of us not possessed of large funds of book-buying have had to make do with coverless editions of these when we find them secondhand, and it’s amazing to see the quality and consistency of the designs all arrayed in one place.

Equally fascinating is seeing how design fashions change with each decade.  By and large, the 1930s covers start out with a blocky simplicity that develops into a charmingly utilitarianism as the decade progresses (lots of policemen and skulls); the 1940s add a menacing air of threat by featuring a more person-oriented cover; the 1950s are heavily character-based, perhaps in response to the more woman-in-peril elements that crept into the crime fiction of that decade; the 1960s go for cubistic prints and isolated body parts, and the 1970s adds to this a sort of mundane close-up photography of unusual objects to create a jarring contradiction; the 1980s and 90s then over-egg this to the point of leeching most of the romance and intrigue out of the covers, but you cant help but feel that this is at least in part in response to genre developments elsewhere.  You’re vanishingly unlikely to have had the opportunity to study this range of artwork before, and this is one coffee table book that you really feel people will read — there’s as much in it for the design nerd as the fictional murder geek. 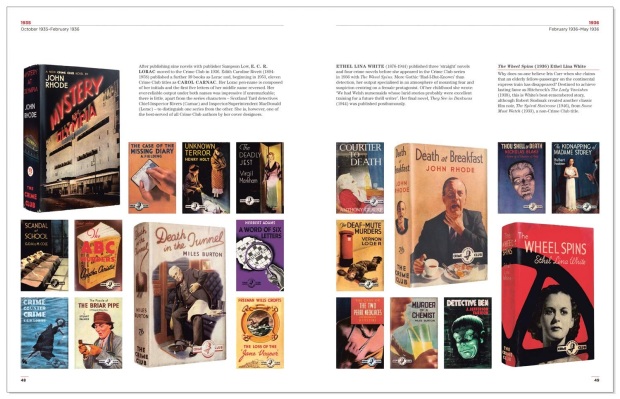 A brief concluding section to this contains some lovely historical footnotes: phantom titles which never appeared in the Collins Crime Club imprint, the iconic ‘White Circle’ line — a cover design easily the match of the ever-popular Green Penguin for functionality, and, perhaps controversially, I’ve always felt the White Circle covers to be far superior to the Penguins — some special editions of books, and a mention of a very interesting-sounding card game.  As a dash through the associated esoterica that such a long-lived imprint would have produced, it’s hard to fault, and impressively comprehensive. 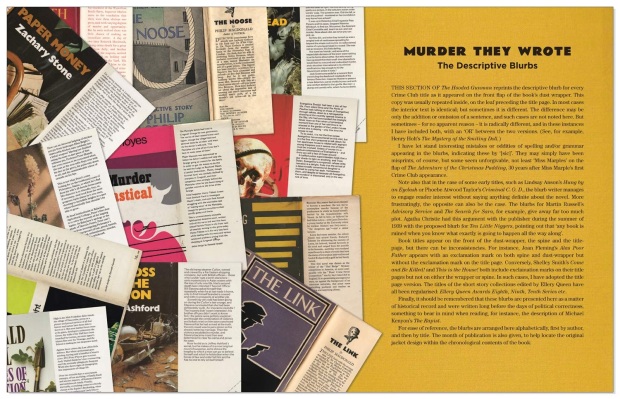 We finish with 160 pages of the blurbs for every single book — yup, every one — and again you have to marvel at the range of plots arrayed under this one imprint for the seven decades it produced high-quality crime fiction for the masses.  We’ve enjoyed a good run of reprints of late where classic crime fiction is concerned, but it’s still easy to forget that at one time this sort of this was the chief occupation of a large, reputable publisher committed to putting out excellent books by excellent authors.  In a world where newspapers, railway stations, social media, and seemingly every third blog works hard to push each week’s new The Girl with a Window in the Building of Her Secret title upon you, it’s incredible to think that such efforts were at one time deployed for the now-classic authors and titles contained herein.

As a trip down memory lane, this book is a delight; as a celebration of the Collins Crime Club and all the work done by their multitudes to bring these books to the public, this book makes you feel warm inside and hopeful for the future of classic reprints — because if someone saw value in these books before, and if the expertise on display here has taken the time to remember that, then maybe interest will eventually circle round again.  How wonderful to be John Curran, and to have the opportunity to immerse yourself so fully in these sorts of pursuits; and how wonderful for us that David Brawn had the insight to recognise the value of this undertaking and to bring it to fruition.  Just enough time remains for you to request this as a gift this festive season, and it’s a wonderfully detailed and rich piece of history that’s uncommon enough even in these GAD-sympathetic times.  Equally, there’s no reason you couldn’t get your own copy.  Go on, you’ve worked hard this year, you’ve doubtless earned it…