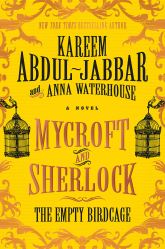 It was with tremendous excitement that I greeted the news of a third Mycroft Holmes novel from Kareem Adbul-Jabbar and Anna Waterhouse, as the continuation of this series brings joy to my old and weary heart.

The Holmesiverse has seen, to put it mildly, quite a lot of addition over the years since Arthur Conan Doyle’s characters entered the public domain — from long-term players like Michael Kurland’s Professor Moriarty Series and David Stuart Davies’ various takes on the legends, to one-shots like Colin Dexter’s ‘A Case of Mis-Identiy’ (1989) and Stephen King’s ‘A Doctor’s Case’ (1987), which, yes, I mention every time because I’m hoping someone will finally read them — and no-one could hope to read everything put out under the name (if you imagine it, someone has written it — Sherlock vs. Cthulhu/Dracula/Martians/Zombies…), and doubtless much of it is also terrible.  And in such a crowded field Abdul-Jabbar and Waterhouse have excelled in creating something at once recognisably Holmesian and yet fresh, that builds expertly on what’s due to follow by treating the characters as people rather than simply famous names, and by putting those people in a setting that lives and breathes.

The Empty Birdcage (2019) is the third of this partnership’s offerings, continuing the story of the still-youthful Mycroft and his friend and business partner Cyrus Douglas.  By now, seeds have been sown to explain certain aspects of the Diogenes Club-bound hermit we know he will become, and where this partnership excels is in not allowing the idée fixe of Mycroft’s eventual state to dominate their handling: as a man of 27 years, he naturally views with horror the sedentary state that he fears awaits him, and his actions herein are predicated on the basis that, while he can, he will continue to act in the interests of England and the Crown, as well as those of his friend and confidant Douglas and, yes, his irritating stripling of a brother, the 19 year-old Sherlock.

“You and I have different goals, Douglas.  We both wish to eradicate evil, but whereas you mete out justice where you can, I make it my vocation.  And although I well know that you are not one for ends justifying means, you must trust that my motives are neither petty nor self-serving.”

Where preceding volume Mycroft and Sherlock (2018) threw the brothers together as much as possible, this one, after approximately a third of its length passes establishing necessities, separates them onto parallel tracks.  Mycroft and Douglas are tasked with to establishing the whereabouts of the abducted fiancé of the woman Mycroft secretly loves, and Sherlock and Mycroft’s trusted manservant Huan aim track down the ‘Fire Four Eleven’ killer, who at the start of the book has already struck eight times across the width and breadth of the country, claiming victims as diverse in age and location as can possibly be imagined and showing, Sherlock surmises, a huge degree of planning.

But against whom had he plotted so assiduously?  For no seven year-old had ever destroyed a man’s life or livelihood!

Each thread has its own joys.  Douglas’ Trinidadian heritage makes him somewhat obtrusive in Victorian London, and much good, unobtrusive work is done in addressing the difficulties he faces purely on account of his race and the way people choose to treat him.  Yet he and Mycroft have a fabulous relationship, built on nothing less than equal terms, where Douglas is a likely to challenge Mycroft’s at-times too-cold cunning manipulations as he is to poke merciless fun at his vastly more far-sighted, younger friend:

“An economic collapse is now imminent.”

“You have been predicting it for some time,” Douglas reminded him.  “Perhaps it is your understanding of the word ‘imminent’ that is at fault.”

Such a well-realised friendship is rich ground from Mycroft’s humanity to emerge, and while his intelligence and gamesmanship are never in doubt — he is, after all, the more intelligent Holmes brother — there’s a sadness to him that comes very easily when faced with the dual concerns of his health and the love he feels which, on account of such considerations, he decides is better to leave unrequited.  It’s difficult to write a love story in this way, with one or possibly both parties gazing longingly and held back by social customs or some other decorous reasoning, but the lightness of Mycroft’s interactions with Ai Lin are heartbreaking in all the right ways.  Played out against the slums of ‘Jenning Rents’ — in the now hilariously expensive London Borough of Kensington and Chelsea, how times change — it’s one of the few occasions I can cite of a love story enhancing the plot rather than being crow-barred in to appease a demographic.

Sherlock, then, is determined to pursue his investigations, despite Mycroft’s express objections:

“Sherlock, be sensible.  Unless you propose to join the constabulary, whoever would employ you as a sleuth?  And if you cannot make a go of it, a young man of your age and station has no option outside of education or the priesthood –“

Again, a very smart series of decisions is made here.  Yes, Holmes Jr. will become a fabulous brain, a thinking machine of unparalleled brilliance, but we once again get this younger version who is not quite all he will be: griping at the pettyfogging frustration of newspapers not including simple details of the crimes that would help with his deductions, or sitting in a pub poring over the details of the victims — age, locations, order or death, initials, anything — in the hope of stumbling into some meaningful pattern.  “It seemed that everywhere he turned of late, there was a distinct and deeply disquieting chasm in the depth and breadth of his knowledge” we’re told — sure, he can assess the qualities and benefits of a particular paper stock on which the killer’s taunting notes are written, but elsewhere “he was not well-acquainted with cats” and is unable to identify a certain aspect of a plant when it becomes important (and is more than happy to allow a toxin to act upon himself as “it might make it easier to identify”).  A driven man he certainly is, but we’re acutely aware of the gaps that lay before him if he is to become the man we know he does.

As Sherlock seeks to ride his hobbbyhorse of detection ever further into practical crime-solving, wheedling out of his reluctant brother the opportunity to explore the murders with impunity, Abdul-Jabbar and Waterhouse do more than simply pour blandishments on their relationship, too.  They bicker and rub each other the wrong way as only siblings can (“I burned nothing…”), but underneath it all there’s the linger need for each to recognise in the other what no-one else seems to: “although [Sherlock] was loath to admit it even to himself, sometimes Mycroft’s readable doubts about his abilities could be demoralising”.  Mycroft, too, is keeping secrets — from everyone, it seems, not just Sherlock — and is desperate for people to understand without wishing to tell them and, as he sees it, burden them with his own difficulties.  Ah, men!

If I haven’t made it clear, this is also gorgeously written.  There’s an effervescence to the prose, light with research-rich detail that never seeks to overwhelm you with Research-Rich Detail, allowing the setting and its mores to seep through delicately.  I don’t read a lot of historical fiction because I typically find authors so keen to insert all the hours they spent in a library, but Abdul-Jabbar and Waterhouse have that Midas touch with their 1870s setting which brings everything to life through the canniest observation of the smallest details — a bodyguard being unable to check the time on his pocket-watch, for instance — and paints in the necessary plot and setting with a brisk and effortless intelligence.  Smartly tying in some of the Holmes genius to such considerations, too, is another superb choice: the deduction about Shetland ponies, for instance, is a perfect demonstration of both intelligent deduction and the setup at the house in question.  If there’s a better-written Holmesian pastiche being produced these days, I want to know about it.

“I thought you’d forgotten about us.”

If I wish to find fault — and I don’t wish to, but I can — it could be argued that the plotting in one of those strands goes a bit wild in the final stretch.  The Mycroft/Douglas thread is very neat, and resolves itself with an unthinkable choice that hits hard and, should more volumes follow, wil doubtless resonate down the years ahead.  The Fire Four Eleven thread goes…crazy.  Given the semi-impossible nature of the crimes — people collapse with no-one near them and nary a mark on their body, plus notes delivered to the scene of the crime with no footprints in evidence half the time — there’s a wildly enjoyable piece of speculation that seems to be setting up a fun reversal come the end, and…well, it just doesn’t happen.  Now, in all honesty, it feels to me like a deliberate throwback to one of Doyle’s most famous stories — and one I’ve written about on this very site — but the resolution of that series of murders is loopy in the extreme and won’t be to everyone’s liking.  Quite apart from how non-clued that part of the mystery is (and, no, no-one ever claimed this was playing fair) there are two or three obvious places where in order to leapfrog an obstruction to continuance we’re simply told something that you can’t really believe anyone would ever be able to find out that easily.  It’s far from fatal,  but it stuck out starkly for me because of how effortlessly smooth and wonderful the rest was.

There’s always the chance I’m judging this a bit too harshly because of how damn close it comes to my brand of perfection.  As I said up top, to see another volume in this series delighted me, because Adbul-Jabbar and Waterhouse write so well, and use the existing Doyle corpus with an intelligence most other Sherlockian pastiche writers need to study — it’s a legitimate story universe of its own, not comprised of some nudge-wink clumsy foreshadowing hoping to scrape by on “Hey, I get that reference” fan service laziness — and such assiduous care should be recognised and celebrated.  I hope, I hope, I hope, I hope, I hope we get a fourth book — and a fifth, sixth, seventh… — as I love what they’re doing with these characters.  If I’ve intrigued you even a  little bit, please get a copy of this, and let’s help the two continue their labour of love; I can think of no other hands I would rather place the young Holmes brothers into.

The Mycroft Holmes series by Kareem Abdul-Jabbar and Anna Waterhouse: