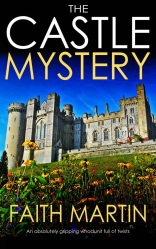 Another week, another debate brewing over precisely how “self-published” a book is when it’s been put out under the auspices of Joffe Books, who at least appear to be a bit more of a traditional setup than has featured in these AiSP before.

But, well,  a slight editorial sweep doesn’t necessarily a trad-publishing setup make, and so while this isn’t quite the route one envisages when talking about self-published fiction I’m going to keep it in the self-published pen.  While once again reinforcing the intended message that “self-published” doesn’t necessarily mean “terrible”, there’s something about the frankly outstanding productivity of author Faith Martin/Joyce Cato/Maxine Perry/Jacquie Walton — some thirty-ish books since 2004 — which would not only put the likes of John Rhode to shame but also feels more like a self-publishing arrangement, even if excellent independent publishers are willing and able to brings such books to the public quickly.

It’s getting complicated, is what I’m saying.  Had I started this series later, it would probably be more accurately (but less-catchily) titled Adventures in Non-Traditional Publishing (Including Independent Publishers, Self-Publishing, Fan Fiction Forums, and Any Other Emerging Streams), but I didn’t and it’s not so let’s move right on.

The Castle Mystery (2019) by Faith Martin is a revised version of an earlier book titled The Invisible Murder (2012) published under another nom de plume, Joyce Cato, and was brought to my attention by Puzzle Doctor over at In Search of the Classic Mystery Novel (see link below).  It’s the fourth in a now six-strong series of what I think we can comfortably call ‘cozy’ mysteries following the adventures of professional chef and amateur detective Jenny Starling, a great conceit since a chef is able to work in a variety of settings and so encounter the various crimes that the series amateur must stumble upon passim in order to sustain their existence.  And so when a murder committed by an apparently invisible man intrudes on the gently sedate country estate of Lord and Lady Avonsleigh,  their newly-hired cook is able to sally forth unfazed.

There’s a fair amount to enjoy here for the classic detection fan, as Martin is really quite liberal with clues declared for the reader’s benefit and so you have a fairly decent stab at solving this one.  Indeed, there were so many opportunities for the reader to pick up on hints and pointers that I completely misread one of the clues and used it to fashion an entirely false solution of my own.  The plot evinces a playfulness with some aspects of the important points, with Chopin’s Minute Waltz, for one, opening up the possibilities for chicanery, and an apparently impossible aspect of timing making it highly unlikely that any of the omnium-gatherum of clichés who inhabit the castle could have been near the scene at the time of the crime.

And, plot-wise, I think this is pretty good.  The eventual killer doesn’t strike me as a killer so much as simply a name upon whom to pin the crime, but the case around them is neatly and tightly built, and the way Jenny Starling and Inspector John Bishop happen upon their clues is, for the most part, well-handled.  I like the essential trick used to achieve the impossibility, I really enjoyed how it ends up appearing impossible, and while one aspect of the explanation leaves perhaps slightly too much unexplained, well, I can forgive that because of how well Martin takes a couple of classic tricks and repurposes them for a more contemporary setting.  If anything, the no nonsense way Starling is able to dismiss the impossible nature of the central crime is a little to brisk for my liking — it’s realised late on, and we can put it down to her experience that she’s able to be quite practical about such matters, but I always enjoy an impossibility being given time to sit and stew so that the reader is able to pull themselves down some false trails.  But, as I said, I still managed to come up with a completely wrong answer as to ‘how’, so that will more than do for me.

Away from the plot, however, this falls into some fairly common traps, not least of which probably come from that astounding productivity mentioned up top.  The characters are well-defined in terms of their roles in the castle, but none of them register beyond The Stolid Butler With A Secret, or The Stolid Maid With A Secret, or The Stolid Governess With A Secret, or, for a bit of variation, The Stolid Tutor With Nice Hair And A Secret.  And that’s a shame because of how neatly the bits are brought together, and how a little more time teasing out some interest in the people involved could really elevate this.  A good recent example would be either the movie (2014) or the recent TV series (2019) of What We Do in the Shadows — it seems unlikely, but bear with me.  In following the day-to-day lives of a bunch of vampires living in the modern world neither of those incarnations really comes up with anything new in terms of situations, but the way the characters are built — and the characterisation of the werewolves in that universe in particular — lifts every single development so that it feels fresh and engaging.

Martin lacks that here, probably because she’s got another three books to write this year.  And fine, that’s her prerogative, but I’d rather have half the number of books but feel twice as engaged in the people — that would get me reading another one from this series pretty soon, whereas instead I’ll probably just wait to see if there’s another impossible crime in any of her work somewhere and read that in the next year or so.  It’s at times like this that you really appreciate the way Agatha Christie used what appeared to be tropey characters to lull you astray; once you see someone simply layer on the tropes — with no sense of the reader being involved in misdirecting themselves, merely because they need A Butler — you appreciate the difference it makes.

“I’m not scared of werewolves.”

Editorially, too, there’s a tendency to let things run a little loose.  This is not a long book, but at various stages throughout Jenny Starling is described as “statuesque”, “Junoesque” (twice), “extremely curvaceous”, “this Amazon of a cook”, having a “curvaceous, amply-proportioned form”, and “both beautiful and large”.  I’m all in favour of our heroines of popular culture not being Disney-thin sylphs sitting around mooning for their man to come and find them, but do I need seven physical descriptions of my main character?  Have I ever got that many before?  Hell, even The Seven Deaths of Evelyn Hardcastle (2018) didn’t wallow in it that much, and the main character’s body changes eight times in the novel!

And odd little asides started to importune in a way that’s possibly just going to frustrate me, but seem oddly out of key with the point they’re trying to make.  The Art tutor Malcolm Powell-Brooks, written herein as a sort of Byronic figure who sets the heart of the teenage Lady Roberta a-flutter, has at one point the following written about him:

Now, dressed for dinner, Jenny could quite see why Lady Roberta was so star-struck, for he looked exceedingly handsome in his lightweight blue suit.  Especially tonight, when shock had made him paler than ever, lending him the air of a Shakespearean tragic hero.

Now, Shakespeare’s tragic heroes are frequently madmen and murderers, not the alluring model of swooning Romance that Martin is going for, and so this comparison doesn’t work — unless we’re supposed to find a pale man in a blue suit compelling because he has about him the blood-soaked air of someone who will gladly sanction the murder of children to further his own egotistical ends…mmmm, sexy!  And with much being made of Powell-Brooks’ degree from the prestigious Ruskin University, it seems odd that he’s described as “not particularly erudite” at one stage, too — surely he’d be exceptionally well-read after achieving such a challenging degree, and what is meant to go here is “eloquent”.   And would a fabulous, highly-successful chef really have the personalised number plate EAT ME1?  That…means something else, right?

I don’t want to go on — the magically-appearing tortoise Henry is a cutesy, cozy holdover that I could do without, and the weird anti-vegan bent things take in the final few pages seems like an oddly personal totem just because it’s fun to bash vegans — because this is overall more successful than not, but it feels difficult to recommend to the discerning reader once you get past the plot on account of these various flaws that crop up throughout and which, I’m sorry to say, a more professional edit would weed out, or at least reduce.  If you’re interested in the lighter end of mystery fiction then dive in, these peccadilloes will likely vex you less than they do me and you’ll be able to enjoy the good elements far more as a result.  Personally I won’t be rushing out to read more Faith Martin just yet, but if there’s another impossible crime in her output then I’ll queue it up for some future point.

Puzzle Doctor @ In Search of the Classic Mystery Novel: [T]his is…a proper fair-play mystery. You know, with clues and everything. The impossible crime is fairly clued and, to be honest, not something that I’ve seen before, and the murderer, their motives and their methods are all clued fairly and clearly. And while I did guess the murderer using my amazing powers of having read too many mysteries before, I didn’t get most of the rest of it.