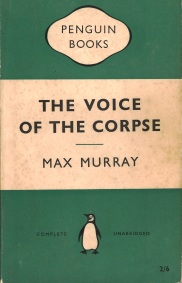 When unpopular spinster Angela Pewsey is killed by a blow to the head — “the first time in many years that someone had done something in her vicinity about which she was not thoroughly informed” — following a spate of poison pen letters, it is met with quite spectacular disinterest by the other denizens of the small village of Inching Round.  And, indeed, the attitude which solicitor Firth Prentice must confront when brought down from London to investigate (quite against his will) by the comely Celia Sim is that, frankly, most people would rather shake the murderer’s hand than see anyone hang for such a public-spirited act.

It’s difficult to sum up my feelings about this book.  I think I fell in love with it on the seventh page, following the description of how one gets the train from London to Inching Round, but at the same time I acknowledge that — gigantic on character, very short on plot, virtually absent of detection — it really is not my kind of thing at all.  But, oh, that character, extending beyond the nine or so people you spend any meaningful time with to include a picture of the quiddities of the village as a whole:

It would be unfair to say of Inching Round that its residents enjoyed the aftermath of Angela Mason Pewsey.  On the other hand, there was a background of excitement to the whole business that made quite a nice change.  The tradesmen’s carts took twice the time in making their rounds.  People in quite different social strata stopped and spoke to each other just like they do in wartime.  Several little boys had fights.  No one else would go as far as Ted Mattock and say the village was well rid of the old bitch, because Ted Mattock was an outspoken man whose views always did take him too far.  But without a doubt there was a trace of buoyancy in the air.

Oh, yes, this is very much your typical Village Murder, but it’s a most atypical Village Murder Novel — with a victim who is universally despised and an amateur sleuth who does not want to investigate.  It is glorious whimsy masquerading as Golden Age detection, but there seems no need to hold this against such a fabulously enjoyable experience.  Sure-footed, keenly-observed, hilariously funny at times, enriched with uncommon brutal touches — see the village doctor bitterly resenting being pulled into the inquest on the body because of the number of cases he is forced to neglect elsewhere — and full of a yearning and love of the follies of the human condition that caught me quite off-guard at times.

It’s true that even at the 80% mark you’ve really just watched a group of people reflect on the murder of what one character calls “easily the most hateful woman I’ve ever known” while Scotland Yard detective ‘Long Tom’ Fowler grows increasingly irate at the lack of help he is given by the populace, but it’s a joyous watch and so perfectly written and phrased that I actually found myself reluctant to finish it.  I mean, c’mon — it’s full of exchanges like the following between Firth and one of two young boys who peep in and out of the narrative:

“Are you going to find out the murderer?”

“I am not.  Sergeant Porter is going to find the murderer.”

“And what does your dad know about it?”

“I see, so your dad has been mixed up with the police, has he?”

“No, but he should have been if it hadn’t been for Sergeant Porter.  He locked up a gypsy instead of my dad.”

And Murray’s talent for heartbreak is deployed beautifully in the refreshingly unmawkish love story between two of the suspects, as well as Long Tom’s interview with the faded war hero and self-pitying alcoholic Bill Everard:

Nobody was to blame for the condition that Everard had got himself into but Everard himself… If things had been different and Everard had died in the war, he would be remembered now as a hero and dashing young sportsman.  But he was destined to outlive his welcome.  The odds were that it would take him years to kill himself.

And, dude, I haven’t even gotten to Celia’s staggeringly vague and brilliantly perceptive mother, who might just be my favourite secondary character from the last few years…but I’ll preserve the experience of Mrs Sim for the interested reader, because I hugely enjoyed encountering her unspoiled and would like to pass that on.

The only real flaw I can pick with it is the sudden introduction of yet another suspect very late in the game that seems merely to fill a few pages and come to nothing in the middle of a much more promising thread (though it does give Long Tom a moment to shine quietly as a human being).  That’s a minor gripe, however, in the face of overwhelming delight with every other aspect: I feel as if I’ve spent time in this village with the people, as if I’ve ingratiated myself into their confidences, know their foibles and have a vested interest in their lives.  Legitimately, I found myself slowing down as the end approached, because once it was over I’d not be able to hang out there any more — which I’m pretty sure is a first for me.

It’s a book I closed with genuine reluctance, thoroughly enjoying the way it was concluded, and with a real feeling of satiety at being exposed to something quite wonderful in the genre.  In no way my usual fare (Joseph French would solve it in about six pages) and possibly all the more wonderful because that’s not really what this is about.  We’re one-and-a-half feet in a crime novel, rejoicing in the smallness of Little England and celebrating the bucolic ideal reacquired following the horrors of war — interestingly, The War raises its head in more than one way, and stands as a perfect contrast to the world Murray relates here.  I don’t know if I could pick up another of Max Murray’s novels knowing that this was what I was getting, but maybe in a few more years — more jaded, out of Rupert Penny, coming to the end of Crofts — I’ll leap into his embrace again.  In the meantime, if you find a copy, I urge you to grab it!

Moira @ Clothes in Books: Firth Prentice is a solicitor down visiting the Sims family, and is thrust into the role of investigator. He doesn’t really want to do it (he says) but evidence is pushed into his reluctant hands all the time (mostly while he’s sitting on a gravestone); and when he does reach any conclusions along the way he reliably finds that dotty Mrs Sims knew it all ages ago, and half the village was ahead of him too. He is endearingly cross about all this.

For the Follow the Clues Mystery Challenge, this links to No Killer Has Wings from last week because the title story there and the murder here both involve someone being hit over the head.

And on my Just the Facts Golden Age Bingo card, this fulfils the category…yeah, none of them again.  Godammit.