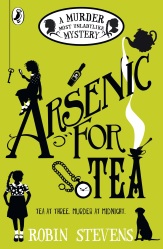 Most people who write and publish one novel go on to complete a second, yet the second is often the one deemed ‘difficult’.  I suppose it’s the not knowing whether a universe and characters previously deployed will stretch over another 100,000 words, or whether a writer used up all their good ideas on Book 1 and so Book 2 is likely to fall on drier ground.

Well, that’s an ominous beginning, eh?  This is, after all, the second book in what has gone on to be a hugely successful series, but it is still a second book.  And it feels like a second book in all the ways you’d expect, too: the writing is more confident, the plot more streamlined, the characters more smoothly introduced and used…and, yes, for my money is falls down on the actual detection.  This in no way suggests that Robin Stevens was left short of ideas — quite the reverse, I’ve read two books of hers that followed this and they were both very, very good indeed — but rather more that this is the last stage at which she really had to work at getting her eye in to balance things.

The change in setting definitely helps: we move from the structured restrictions of Deepdean School — where teachers, students, relationships, and layout all needed to be covered before the plot could really kick in — to the faded Regency glamour of the Wells’ ancestral pile, Fallingford.  Here, the Honourable Daisy Wells (President of the Wells & Wong Detective Society) and Miss Hazel Wong (Vice-President and Secretary of the Wells & Wong Detective Society) have returned for the Easter holidays and Daisy’s upcoming 14th birthday.  And so too will a selection of family members, hangers-on, and no-good types who must all be viewed with suspicion once a poisoning occurs.  But before we get to that, let’s revel in the effortlessly superb brilliance of Stevens’ character beats, giving us a cast of some 15 persons who are generally all painted with exquisitely light touches like:

Aunt Saskia came barreling into the hall, shedding multi-coloured gloves and bits of fur, and squashed Daisy against her bosom.  She did not seem to have noticed me.

“DAISY!” she cried again.  “Where s your brother?  Where is your dear father?  And of course, it is your birthday!  Twelve years old!  Such a lovely age.  I have a present for you — somewhere…unless — oh dear, I believe I left it at the Bridesnades’.  It was a scarf — at least, I think it was… Oh no, wait, here it is!”

She dragged her hand out of the pocket of her cardigan.  Clutched in it was a very small and crumpled square of fabric.

…while also capturing the tensions and difficulties in the grown-up relationships that surround them with an equal ease:

“Oh, are you?” asked her mother vaguely.  “Really?  Well, I suppose it does happen.”

“It tends to,” said Lord Hastings.  “Especially when you aren’t looking.”

Indeed, the tensions between Lord and Lady Hastings (“apparently when you are made a lord,” Hazel informs us, “you are given an extra name to show how important you are.”) are key to understanding most of what occurs in this book, and Stevens does a wonderful job of showing the fractures between the younger wife whose “beauty was like a porcelain vase that must not be touched” and the amiable, faintly shambolic older gaffer of the manor without shying away from the difficulties it creates.

Staying in the house with them was a bit like being stuck in the middle of a war, with troops on either side sending shells over our heads.  I know all about parents not speaking — at home there are weeks when my mother and father talk to each other through me, as though I’m a living telephone — but this seemed to be something else entirely.

It is Lady Hastings who will introduce into the household this weekend the antiques expert Mr. Denis Curtis, and it is Mr. Denis Curtis who will sow many seeds of discontent not just between Lord and Lady Hastings, but also with the suspiciously impersonal governess Miss Alston who is there to continue the girls’ education through the Easter holiday (“the grown-ups are all sure that it is dangerous to give children any free time.  I think they worry we might get up to something awful.”) and with Daisy’s dashing Uncle Felix who may possibly be some sort of international man of mystery.

And it is Mr. Denis Curtis who will be murdered, throwing suspicion on everyone in the house.

The plot develops at a good lick and, freed from quite the same restrictions and curfews that they have at school, Daisy, Hazel, Beanie, and Kitty go about hunting for clues with the expected mixture of excitement and trepidation:

I love detecting, but I also love being safe.  Daisy has a short memory for bad things.  All she can remember from the Deepdean murder is the glory — none of the horrible night-time chasing.  Sometimes I can’t get the chasing out of my head.

But, well, no matter how much they dig and what they uncover — snooping on conversations in the maze abutting the house, hiding under cupboards to catch any overspill from councils-of-war — the fact that the finger of suspicion is always likely to end up pointing at someone Daisy cares about helps stop things getting to jolly-hockey-sticks jaunty.  And, indeed, an upset of sorts seems inevitable — in much the same way that Daisy had to learn a lesson or two in the first book in the series, here, too, is the chance to bring home the magnitude of these crimes, and to show the peril of Daisy’s “short memory for bad things”.  The fact that the finger points so squarely at one person will, of course, clue the adults in the audience to that fact that a reversal is coming.  And come it does…

It is inevitably difficult to explain without going into spoilers, but the sudden dropping of two new pieces of information manage to change the entire shape of the outcome in a way that felt like a bit of a cheat to me.  And put aside all my expectations, it’s just disappointing not only that that person turns out to be guilty, but that they’re guilty for that reason, and that that reason is communicated to the audience in that way.  If nothing else, it renders most of the foregoing irrelevant, which is never a fun position to find oneself in at the end of a novel of (ostensible) detection — it’s Sayers’ The Unpleasantness at the Bellona Club (1928) all over again.  Okay, no, it’s not that sudden, but you certainly don’t have the chance to solve this one, and you’re robbed of the chance to even connect a string of events into any meaningful pattern in the way that the first book very smartly managed once the central deception was exposed.

But, look.  The improvements here in pace, setting, and character are undeniable, and as a ‘difficult second novel’ this shows the sort of progression you wish to see from your authors: opening up the universe more to allow for a great many adventures to come, and showing Stevens as no mere flash in the pan where her writing is concerned.  The sixth novel in this series was published earlier this year, the seventh is due out in October, and I’m already taken in by what Robin Stevens has created here to read at least that far.  And, hell, I’m not even the target audience…!

The Murder Most Unladylike books by Robin Stevens:

My Tuesday theme in September is likely to be Oh Hairy Aaron Term Has Started And I Really Don’t Have Time For This Right Now, so I’ll (probably) be dropping down to two posts a week just while I get going back at work.  Got a theme for October picked out already, so things should return to normal then — plus there will be another Spoiler Warning and a Men Who Explain Miracles episode (or two), so hopefully that will make up for the shortfall… [P.S. no refunds]