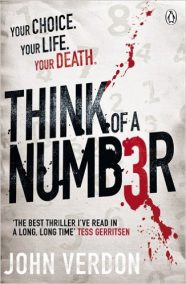 This isn’t a review, it’s an obituary.  My copy of Think of a Number by John Verdon opens with twenty-six glowing review excerpts from a range of authors, publications, and blogs, but it genuinely might be the single worst book I have read in a very, very long time, and without being in the least splenetic about it I’m going to explain why.  I will avoid spoiling it in full thoughtless fashion but, honestly, I’m being mindful of your time, your money, your families, and your health in writing the following.  I take no pleasure in this, it’s purely to save you the experience of this fustercluck of a novel posing and sold to you as something intelligent and worthwhile.  It is neither.  That this is on the market at all is a slap in the face to all concerned.

Retired NYPD detective Dave Gurney was renowned for his brilliance in tracking down serial killers, but it took its toll.  Then one day an ex-college friend comes to him with the following problem: he has received an anonymous hand-written note couched in vaguely threatening terms asking him to think of any number between 1 and 1000 and, upon opening another envelope contained with the letter, finds the writer has correctly deduced that he’ll think of the number 658.  He claims that the number holds no significance but, disturbed at being so well anticipated by someone unknown to him, asks if Gurney will look into things.  It’s an awesome hook, the impossible angle to it reeks of genius manipulation, and I can believe Verdon got a four book deal on this concept alone.

The problem with hooks, though, is that you need to hang something on them, and there are so many difficulties with everything that follows, I’m not even sure where to begin.  Let’s start with Gurney, who has signed up for art appreciation courses following his early retirement:

Despite his pre-course assumption that his greatest challenge would be staying awake, he found the instructor, Sonya Reynolds, a gallery owner and artist of regional renown, riveting.

The old ‘hooked into esoteric past-time by fascinating mentor’ card, eh?  Great, that could work really well.  It’s a good twist to have the role model who inspires this unexpected fascination be an older woman, too, so let’s hear about her insight and enthusiasm that inspires Dave so much (this immediately follows the above):

She was not conventionally beautiful, not in the archetypal Northern European Catherine Deneuve mode.  Her mouth was too pouty, her cheekbones overly prominent, her nose too strong.  But somehow the imperfect parts were unified into a uniquely striking whole by large eyes of a deep smoky green and by a manner that was completely relaxed and naturally sensual.

Yup, that’s why he finds her riveting.  And with this out of the way in the first chapter, there is never any need to allude to her knowledge or enthusiasm or…anything ever again.  Gurney sees all the women he encounters — except his wife, who’s there to make him feel awkward except when she happens to kick-start part of the plot — in sexual terms (even the insightful, intelligent Sergeant Wigg only becomes interesting when he notes her ‘interesting eyes and finely sculpted mouth’).  And if Dave Gurney doesn’t want to fuck you, Verdon ensures you’re either a moron or an asshole.

I could pick any other character at random (two of them look like Tom Cruise and are there to shout out stupid things to prove how clever Gurney is…and also to fill some pages so that someone of average intelligence doesn’t just go “Uh, surely it was just done like this…”) but let’s take, say, District Attorney Kline — a pen-pushing politician who has no idea what it’s like out there on the front line if ever there was one — who when Gurney suggests that the killings they face might have ritual significance responds thus:

“Satanic?” Kline’s expression of conventional horror poorly concealed his appetite for the media potential of such a motive.

Because of course only genius hunter Dave Gurney could possibly understand the linguistic finesse of the word “ritual”.  And it’s clearly because everyone else is so wide of the mark, lacking his finely-honed skills, the skills that made him the man he is, the man’s man, the manliest of men, that they need him brought in on this case…because he’s the best, the absolute best, and there’s no-one else in law enforcement to touch him.  Honestly, if I worked in law enforcement in the United States, I’d be taking out a class action lawsuit for defamation after reading this.  Dave Gurney is a moron, and that no-one else in wherever the hell this shit-pile is set can come anywhere close to this level of genius and insight shows how poor Verdon’s characterisation and plotting really is, so let’s get into that next.

The main problems under investigation run thus: 1) the above-mentioned letter with the impossible number-guess, 2) a second letter delivered to the same man who the killer phones to tell him is in his mailbox, asking him to pick another number only for that to also be in the as-yet-unread letter, and 3) a “footprints vanishing in the middle of a snowy field” murder.  None of this is resolved with detection, all of it coming in a sort of inspired moment of unrelated insight towards the end…and if you’re hoping for a false solution or for these suddenly-grasped straws to be incorrect, well, saddle up and ride on.  And you would have been hoping for that, as was I, because these solutions are — at best — lazily basic.

This matters for several reasons, not least because it represents the diminution of the need for intelligent plotting which has usually been at the core of this sort of undertaking.  When the police called in Poirot or Fell they had a genuinely baffling mystery that required the egalitarian approach of an outside perspective of someone who was able to look at things differently.  Here, the police call in Gurney because John Verdon has a character called Dave Gurney he wants us to think is awesome.  He in no way establishes the bona fides for this character at any point — it’s more like boner fides, as already explained — and there’s nothing approaching the regimen or supposed method of a professional who commands the respect Gurney does.  His entire approach is just a garbled melee rather than a logical process that lays each method perfectly clear, making his brilliance difficult to buy.

And here’s where the problems move away from being Gurney’s shortfalls and become Verdon’s.  When Gurney realises the solutions to the above after 300 pages and three deaths he does just that: he realises.  There’s nothing about his experience or his skill set that makes him the one to come to this conclusion…he’s the protagonist, so he has to protagonise — Verdon has no way to end his own plot otherwise.  And, fuck, don’t even get me started on the motive behind all of this; I just don’t have the words for how so, so far beyond pure and utter bullshit that is.  It makes me weak just to contemplate it.  Early on I had hope for Verdon’s writing in spite of some of the above being evident, and it was bolstered by a moment where Gurney reflects

If you don’t know where to being your own story, why the hell are you here?

I can’t begin to tell you how unfortunate it is that this line remains in the published book.  Because here — last one, I promise — is where the problems move away from being Verdon’s and become something bigger again.  This was published by Penguin in the UK — Penguin Books, you’ve definitely heard of them — and yet at no point did a professional proof-reader, editor, or anyone else from that highly-esteemed company think to raise any concerns over writing like this:

“Back at Fordham they used to say you looked like Robert Redford in All the President’s Men.  Still do — haven’t changed a bit!  If I didn’t know you were forty-seven like me, I’d say you were thirty!”

Quite apart from the fact that Redford was 40 years old in that movie, no-one actually talks like this, even in the ultra-false setting of a decent puzzle plot…so why is this and so much more tone deaf awfulness retained here?  The writing is horrible, which doubtless comes from Verdon’s own callowness in this area, fine, but why was nothing done to even attempt to rustle this into shape?  is it because by flooding a market with review copies the publisher could guarantee enough pre-release praise to stick in the front of the paperback to con the unsuspecting into wasting their money on this?  Well, now I’m stepping out of my bounds, so let’s finish…

Man, there’s so much more to say — manly statements like “I’m ninety percent sure — which is as sure as I get about anything” are a drinking game in their own right — but mainly this is an insult to the impossible crime subgenre, and insult to the intelligence of the average reader, an insult to people who actually do this for a living, and an insult to you in genuinely appearing to make the case that this is a book you should read at the exclusion of absolutely anything else.  No, I’ve never published a novel and so maybe I shold shut up, hey?  The fact that I at least recognise my own efforts aren’t worth inflicting on anyone else still sort of makes me a pyrrhic winner here — believe me when I say that having that made clear to me was neither necessary nor an experience I’d wish anyone else to share.

Literally anything else; think of a friend you regret losing touch with and give them a call or send them an email, perhaps.  I’d like to imagine something good came out of me reading this.

For the Follow the Clues Mystery Challenge, this links to The Madman’s Room from last week because both feature characters whose ability to foretell the future is explained rationally.