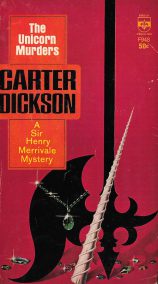 When a man is found dead, stabbed between the eyes by a unicorn (of indeterminate nationality) — a, yes, fictional animal that can nevertheless apparently turn invisible at will — you don’t expect to find yourself in the GADU.  And when a second victim is then killed in the same way but in full view of witnesses, if one can witness an invisible animal, you better hope you’re in the GADU or else things are about to get silly.  Well, it’s your lucky day, because you are in a classic impossible crime mystery and things are about to get silly — this book is probably the final time John Dickson Carr had all the ingredients for a classic and didn’t actually write it, instead leaving a few edges untouched so that the overriding impression is slightly more “Er…what?” than “Hell, yeah!”.

It is, though, a tremendous amount of fun seeing Carr at the end of his early phase of staggeringly fecund imagination, flipping and jumping between genres with the sort of agile literary parkour that was completely his own.  Some may find this a little ADHD — it’s spies! it’s a chase! it’s battles of wits! it’s comedy! it’s gothic! it’s puzzle! it’s impossible! — but you may have noticed that I’m something of a fan of Carr, and I’ll take his wild flights of genre-bending in my stride quite happily.  It’s interesting to note the increased confidence here, too, as he has a couple of revelations that in the likes of The White Priory Murders (1935) would have ended a chapter in grand, dramatic fashion, but here are quietly relayed in a manner that belies any accusations that he doesn’t have a good grip on what’s happening in his own plot.

There is as unicorn in this plot, but we don’t find out what it is until the final pages.  What we do know is that French master criminal Flamande has publicly threatened to steal and his nemesis Gaston Gasquet of the Sûreté has equally publicly vowed to defend.  That this theft will take place on a plane is also promised, and I spent a good 20 pages fighting off a sort of delirium tremens as memories of Obelists Fly High jumped out at me from every paragraph.  Carr could absolutely write a classic ‘everyone in one place’ mystery, but this isn’t it — the plane is abandoned, and then things get really weird…

Once you get over a couple of huge coincidences early on, this is actually a coup of plotting and imagination that for solidly 75% of its length shows Carr at his best; every time you have a handle on something, off it twists, and the number of little surprises worked into the threads of the plot — a woman being terrified by opening a book, a man throwing his suitcase out of a window, the fun had with the uncertainty over the identities of Gasquet and Flamande — is pretty incredible.  How in the hell Carr managed to publish four books of this complexity and more in 1935 alone beggars belief; that man’s mind must have been a furnace  of ideas, it’s a wonder he ever got any sleep.  Things do get exceptionally talky in the closing stages, though, and in spite of a of those few very clever casual revelations you’re likely to find yourself a touch…not bored so much as exhausted.

It resembles the aforementioned The White Priory Murders in this regard, except that TWPM had a lot of talking along the way to it’s brilliant, brilliant reveal.  This has brilliant, brilliant reveals…and then dumps a lot of talking on you.  The impossibility is very clever here — you’ll doubtless get the idea, if not the precise details — and it’s interesting to think just how little Carr’s own focus was on making the impossible angle the driving element given how famous he has now become for his impossibilities.  If you’re in this solely for the impossible unicorn murder you’re going to come away a little deflated; go in for the joy of a greatest detective novelist of all time finally figuring out how to do this and working the last of the rust out of his system and you’ll fare much better.  The impossibility-free The Punch and Judy Murders, a.k.a. The Magic Lantern Murders (1936) from the following year would employ this aesthetic far more successfully, with the final quarter’s summation of the preceding madness being a great deal more satisfying.

And I haven’t even mentioned Henry Merrivale yet.  We have with him and Gasquet a sort of ‘duelling banjos’ situation as seen in the likes of Gaston Leroux’s The Mystery of the Yellow Room (1907) and Agatha Christie’s The Murder on the Links (1923).  H.M.’s more tempestuous nature makes him a slightly more compelling presence than would the stoic solidity Gideon Fell be here (Fell’d be going “Heh, heh, heh” every three pages and finding it all mightily amusing), and there are some wonderful moments in the denouement when he relates when and how he started to twig to things early on that show The Old Man as a force to be reckoned with.  It’s just a shame that too much verbosity still rules the day.  Maybe I’m being harsh in my rating but, oof, the quality from here more than justifies it.

If everything goes to plan, I shall return to this book on Saturday with a slightly different purpose; in the meantime…

Ben @ The Green Capsule: Finally we get Carr in his element, and he plays the plot with expert precision. From the moment the murder happens, the book careens out of control towards an uncertain conclusion. Without me giving anything away, the plot bypasses a traditional investigation — in its place providing a bit of a thriller imbued with a real sense of peril.

Noah @ Noah’s Archives: This is one of a very small group of mysteries that really is worth trying to solve. Carr seems to have felt that this sort of novel is a kind of battle between the reader and the writer, and if you want to have a chance of winning, I recommend that you take it very, very slowly — know where everyone is and what they’re doing — be aware that trickery and impersonation abound — and stop before the end and formally declare your opinion as to who the murderer is. There are so few of these mysteries in the canon that it is worth savouring this like some exquisite lollypop, taking only slow, careful licks until the centre is revealed. I envy the reader who has yet to read this book. Don’t spoil your experience by rushing through it.

I submit this book for the Vintage Cover Scavenger Hunt 2017 at My Reader’s Block under the category A Green Object.

For the Follow the Clues Mystery Challenge, this links to last week’s Death in the Tunnel as the two authors collaborated on a novel (Drop to His Death, a.k.a. Fatal Descent (1939)).