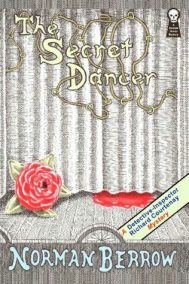 In a week that saw me start and quit three books in a row, it was a relief to open Norman Berrow’s third novel and be put immediately at ease by his nimble capturing of the pre-show backstage goings-on at the latest, most fashionable theatre in London.  From the music described as “…a shamelessly stolen conglomeration of Mexican airs, assembled in Tin-Pan Alley, shipped to Europe, and played with astonishing variations” to the beautiful summation of leading lady Lili La Paz as “a miracle to watch; and hell to live with”, it’s the sort of opening salvo that reminds me why I return time and again to Berrow and his slightly disappointing impossibilities (the man does love a secret passage): simply put, he writes glorious prose.

This time around, there’s no impossibility; sure, the word “impossible” is uttered a few times, but it’s a statement of frustration rather than appearance — the murders that go on backstage during a performance by surely the most hard-core cast ever don’t need to be explained, merely solved.  And again there’s another trademark Berrow policeman on hand, the semi-upper-class, dapper, precise Detective Inspector Richard Courtenay; naturally he’s in the audience for quite another purpose entirely, but gets swept up into proceedings once the deaths and disappearances begin.

A large portion of the evening is spent with Courtenay and the American theatre owner Sam Walden as they pinball from one event to the next, and Berrow has so much fun with them that you can’t help but get swept along.  These are characters who come to life through their dialogue, from Walden’s near-phonetic argot (throughout, he calls Courtenay “lootenant”), via Courtenay’s mock-cheerful use of “Samuel” and “Sammy” to refer to his companion, to their opening exchange that sees them swap barbs over the correct pronunciation of words (there’s a superb moment of reflection here, as you realise Walden is saying a word phonetically that in your reading you will not have been), it’s refreshing to have a book with some vitality zip along at a good pace with plenty of enjoyment to spare.

And it’s in this joy of language and deliberate understatement that Berrow really flies:  for instance, a scene in the show during which leading man Del Kazar sings to a bunch of beautiful women is condensed thus:

There was a considerable amount of osculation going on.

Following an awkward moment, one of Courtenay’s subordinate’s embarrassment is described through him looking as if “lost in a contemplation of a profundity of the infinite”, and the sublime metaphor used to describe the girth of the rotund Sergeant Marks really should be saved for you to experience yourselves.  For wit and beauty of phrasing, Berrow really takes some beating.

But, of course, there’s the small matter of the murders, and he also doesn’t shy away from the horror of death so closely confronted.  Like the equally showbiz-set Death of Anton, there’s an accomplished juggling of tones that never drops anything ham-fisted into is escalation of one and deceleration of the other.  The clues, such as they are, are a touch thin on the ground, and an aspect of non fair play means the guilty party is caught using a piece of evidence that the reader doesn’t have the chance to use (almost, almost, but not quite…), but on the whole I could give this a pass, slap four stars at the end of this review and be done with it.

The only thing that holds me back is that it lacks a truly superb piece of misdirection; everything progresses along clear, well-defined lines, and the solution makes as much sense as the average GAD mystery, but it just needs a little bit more in the plot to make it really sing.  Y’know how Agatha Christie or John Dickson Carr (yaaaaawn, them again…) would convince you — prove to you — that the killer has to be one of five people, and then it would turn out to be a sixth who also fit the bill without you connecting it?  With just the faintest air of that this would be stronger in its finish, and help justify the stacking of four or five coincidences required to make it work.

Lacking it, it’s merely a very, very good time, and further proof that more people need to know about Norman Berrow.  I shall get to Courtenay’s valedictory appearance, published the following year, before too long on this evidence.

Ben @ The Green Capsule: The Secret Dancer does indeed feature some of Berrow’s brilliant prose, which is impressive given that it was written towards the very start of a twenty novel career that stretched approximately as many years. Within mere pages, I remembered just what I loved about the author, which is that ability to create sentences that I always feel like I should be jotting down in a notebook to savor years later. Well, the other thing that I love about Berrow are his creative mysteries (devil footprints in the snow, disappearing rooms…), but honestly, The Secret Dancer isn’t one of them.