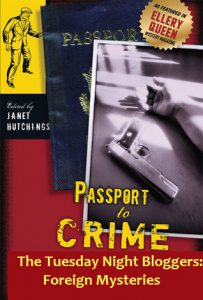 Alongside classic detective fiction and locked room/impossible crime mysteries of every date, stripe, and hue, I read a moderate amount of both classic and modern SF.  And as much as I rejoice in the closedness of the ‘rules’ of detective fiction, I take equal delight in the free-form craziness that can open up in front of you in excellent SF.

This occurred to me while reading one of the books under discussion today purely because of the way SF can be used to explore the ‘other’ — taking aliens, or any other pan-dimensional being (coughIndianaJones4cough), or sentient machines and trying to break them down in out terms (Orson Scott Card’s first sequel to Ender’s Game, Speaker for the Dead (1986), is one very good exploration of this).  I wanted to look this same principle when used in detective fiction, taking a visitor from foreign climes and then exposing them to Western culture and vice versa, and from the perspective of a Western author, no less, so I give you… 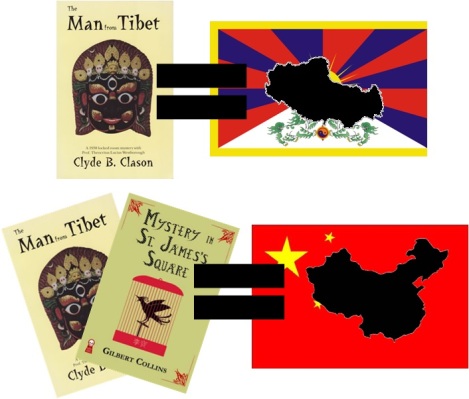 Both The Man from Tibet (1938) by Clyde Clason and Mystery in St. James’s Square (1937) by Gilbert Collins have white, Western men as their ostensible focus, and both books have these men utilising the skills of an Oriental factotum/major domo/companion/whathaveyou at a time when an Eastern face in a Western setting was quite a novel experience.  The Clason goes one further and introduces a religious leader from Tibet, too, and it’s the way these two books go about applying this Eastern thread to their plots is interesting in the sheer opposition they take.

We might as well confront straight up that Clason seems by far the less comfortable of the two, though perhaps as his knowledge seems to have been gleaned at arm’s length — he lists a bibliography of 55 books (yup, fifty-five) as the basis of his research — he’s therefore more inclined to keep the subjects of said research as separate as possible.  Thus, his ostensible protagonist Adam Merriweather has a keen interest in Tibetan manuscripts and gods, but has not deigned to learn the language and instead devolves all responsibility on these lines to his semi-Westernised Tibetan secretary Chang.  Chang — blandly smiling throughout, whether that be interpreted as mindless, kind, threatening, or somewhere in between any given pair thereof — is always presented as an unknown presence, necessarily under suspicion or spouting exposition as required, but never really known either for his motives or his feelings on any matter, the deliberate cipher who is imbued with trust purely because the plot requires it.

Now, to be clear, I am not claiming any racism or love of the Yellow Peril on Clason’s part — we’ll come to the religious lama in a bit — but it’s interesting just how erudite his use of this particular niche is.  The novel opens with a traveller relaying a story of their own experiences in China and Tibet (still closed to foreigners at the time, as Clason covers), and full of details on clothing, language, economics, and other fascinating insights gathered from textbooks.  And it feels like a textbook, too, treated with a reverence that comes from careful study which is eager to replicate itself and be seen knowing in every particular.  This extends throughout, from the lecture on the masks of Tibetan gods Merriweather keeps in his specially-dedicated room to the extended discussion on manuscripts and how the diphthongs of the Chinese language replicate themselves in English speech…yes, fine, it’s all very correct, but it stalls the plot horrendously and the characters get completely lost in the tidal wave of detail detail detail.

Conversely, Gilbert Collins’ take — we’ll leaved out the authorship controversy so excellently expounded by Gavin L. O’Keefe in the introduction of this Ramble House edition, and for ease simply treat Collins as the sole author — gives us a Chinese character who is far fuller a picture as a person, perhaps more fully informed by direct experience: Collins wrote at least two books detailing his own travels in China and so has seen up close that which Clason appears to have merely read about.

Confusingly for the purposes of this post, Collins’ character is also called Chang, but thankfully has far more about him to keep him distinct.  In the search for the missing aeroplane plans that forms the basis of Collins’ novel, it’s arguable that Chang is actually the lead detective — he is the master of disguise (about which more later), he is the cryptographer, he is the one gifted in logical deduction, and if anything is shown to have the upper hand on nominal detective Derek Lavering on more than a few occasions.  The men are essentially equals, with Chang taking no bantering or baiting from Lavering without biting back: there’s a lovely moment when Lavering accuses him of lacking the spirit of Confucius in her personal philosophies, and Chang is quick to point out that Lavering doesn’t exactly comport himself like Boadicea.  Moments like this enrich both the characters and the lot they’re in together.

Collins equally does not shy away from Chang’s less salubrious aspects — he is undoubtedly a very tough customer, quick with a gun and possessed of a clarity of physical necessity that does not shy away from the need for sometimes unpleasant actions.  And before you start thinking that Collins employs him purely to lave his Western hero’s hands of any dirty work, it should be pointed out that Lavering is equally quick to put himself at risk searching a suspect’s house or leaping into the fray as required.  True, Chang is often there to pick up the pieces when Lavering messes up, but it’s not like Lavering is always waiting in the car for Chang to scuttle back and info-dump plot developments uncovered in his “master’s” absence.

Both Collins and Lavering are quick to correct the assumptions of others that Chang is in any way “his Chinaman”, as he’s frequently referred to.  In fact, besides the simple fact of his being Chinese — Lavering has returned from Secret Service work in China, working closely with Chang — there’s actually no need for Chang to be Chinese: it forms no part of the plot, there’s no shoe-horning in of some sudden Chinese text or cipher or any other contrived aspect that Chang is there to conveniently deal with.  Lavering could equally have been in Russia or Iceland or Guinea-Bissau and come back with a native of those lands.  You simply feel that Collins knows the Chinese people and culture from his travels and so has written what he himself has experienced.

A respectful trend that continues to this day…

Clason has therefore taken on the harder task of actually making the ‘foreign’ culture part of his milieu for the purposes of necessity — I shall not spoil how, but it plays at least a small role in the nature of the locked-room murder he writes here — and this could well be why the people he offers feel so false: they’re really more part of the background, the atmosphere, so that his pompous, racist, avaricious old man can be killed in an ingenious manner.  Thus Clason’s Tibetan lama, chasing a manuscript stolen from him, provides little more than colour and blandishments of the “Sometime good luck.  Sometime long liking, it turning same way as Wheel ob Birt’ and Deat’ which cannot stop till kalpa end” variety.

I like the Clason book far less of the two, but even I’m not so dense as to wish to claim that he was going out of his way to be offensive — I maintain, as I said up top, that he’s simply relating something learned at one remove through at least secondary data and so doesn’t have the feel for the people he’s trying to write (this extends to pretty much all the people in the book, too — none of them really feel real).  The fact that two such similar themes were explored within a year of each other and in such contrasting ways in actually kinda fascinating, and these books made very interesting comparative reading.  I’m sure someone else could do a much better job of comparing them, too, but I’ve already gone on long enough and need to wrap this up or else you won’t get your own wrapping up done (see what I did there?).

So, to finish, a point of divergence between the two books: Collins has Chang disguise himself as a Western man at one point by wearing appropriate clothes and a pair of pince-nez that magnify his eyes (though how they’d do this without wrecking his vision I don’t know) and disguise the width of the bridge of this nose, which Collins treats as the main physiological differences duly allowed for, job done.  Yet Clason has a discussion where his characters assert that a man in a full fake beard dark, glasses covering his eyes, and  a hat pulled down low to shade his face couldn’t be Chinese because there’s no way he’d be able to pass as a Western man even when that heavily disguised.  Who’s correct?  Well, there’s only one way to settle it….FIGHT!!!

Uh, no, wait, I mean discuss it in the comments below, of course.  And thank-you for your attention if you made it this far.  Go and have a cup of tea, you’ve definitely earned it.

Allow me to make a late swing at Golden Age Vintage Cover Scavenger Hunt at My Reader’s Block by submitting the cover of Mystery in St. James’s Square under the category Bird.