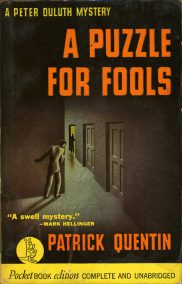 You’re writing a detective novel during the most productive and creative period that the genre has ever gone through, so pay attention — the tropes aren’t tropes yet, they’re still ingredients, and the standard mix requires the following: a murder or two, an amateur detective, a closed circle of suspects, an imminent sense of threat for our hero to fret over and be dismissed by the professional police, a love interest who must fall under suspicion before our hero realises she just might be his soul-mate…any questions?  Okay, off you go.  Keep the dunnage to a minimum, avoid long-winded and namby-pamby descriptions — this is entertainment, remember — and for pity’s sake keep it light.

And so, with this advice ringing in their ears, the duo of Richard Webb and Hugh Wheeler who made up the nom de plume Patrick Quentin at this stage give us this on page 3 of A Puzzle for Fools:

I don’t know whether all drunks get the same symptoms, but without stimulants or sedatives I just felt scared.  And it wasn’t a question of pink rats or purple elephants.  It was just this frightened fear of being alone in the dark; the violent need of someone to hold my hand and say: “It’s all right, Peter, I’m here.  It’s all right.”

Not so much with the lightness, then.  But I’ll tell you something: goddamn I love Peter Duluth.  It takes some courage to make a recovering alcoholic who has voluntarily checked himself into a sanitarium the protagonist of your detective novel, and with Duluth we have the precise mix of self-loathing (“I managed to get some cereal down without kidding myself the milk was rye.”), sardonic asides (“Apparently there’s no one who inspires more gratuitous confidences than an alcoholic in a mental home.”), and mettle (“It was a vile thing to exploit the frailties of this poor bewildered creature, to capitalize the weakness of my fellow patients.  But the murderer had done so, and had forced me to imitate him.  That was another score I had against him.”) needed to make it work.

He convinces as a character who would get involved in the murders when they happen, but perhaps more crucially as a human being who is awake to the pain and fear and confusion that his fellow patients are subject to.  And those other patients come off by and large as people to, with Quentin evidently aware of the risk being taken in seeming to exploit the setting at the expense of the issues such a milieu raises.  Staff and inmates alike, they are realised both as people in a difficult situation and inside of this given more than enough scope to be suspect.  As an ensemble piece, this is actually pretty flawless — the workings of the sanitarium come about in a clear manner, with everyone having their role and their space to feature in the plot.  No sudden sidelining of Geoffrey Exposition for eight chapters only for him to crop up suddenly with the key piece of specialised knowledge; these people are on top of each other all the time, and it really, really works.

The plot promises a puzzle up front and perhaps there’s an element of self-reproach in that title, because it’s not the most complex puzzle you’ll ever encounter.  It’s good — cleanly motivated, fair play in all but a few minor aspects, and developed at an intriguing pace — but you’ll doubtless spot the guilty party in spite of a solid attempt to steer you off-track, and this doubtless comes as a result of keeping everything in such a closed setting.  There’s also an element of Roger Sheringhamming (it’s a verb, look it up) in Duluth’s final summing up which is absolutely perfect, and reveals Quentin to have a very clear idea of how they see this series working (wow, that is astonishingly general; I’m just being careful to preserve this for you).

So the plot is where this falls down for me — not the plotting, just the level of complexity.  Outside of that, the only major issue I had with it was the Inevitable Romance — it all feels…rather sudden, especially given how untrustworthy Duluth is quick to point out the emotional responses of his fellow patients could be.  If anything, it would be nice to see something made of this sudden over-committment on his part — that absolute conviction that the lady in question is indeed his soul-mate would surely be rather disquieting to the lady herself — and it would have fit in perfectly with the delicate emotional state of Duluth and the errors he sometimes makes.

But, well, falling short on a couple of points at least gives them something to improve in future volumes.  All I need to do now is find the bloody things…

I submit this review for the Golden Age Vintage Cover Scavenger Hunt at My Reader’s Block under the category Shadowy Figure.