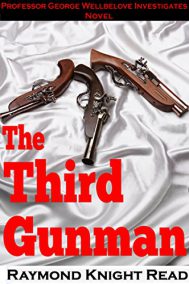 So, how was my holiday reading?

Well, following the discovery of Matt Ingwalson’s Owl and Raccoon novellas I pledged to give more self-published works a go because — hey! — some of it is evidently very good indeed.  Sure, an overwhelming majority is awful, but it’s worth the relatively slight cost to potentially find something surprising.  Which brings us to The Third Gunman by Raymond Knight Read.

Why this one?  Because it has the following synopsis:

A dead body alone in a locked office. The office window open to a rear garden covered in fresh snow….no footprints – sounds like a familiar locked-room mystery? That is, until Professor George Wellbelove and Chief Inspector Peter Meadows find out that the late Patrick Devlin had a dark and sinister past in Northern Ireland….and that opens a whole new can of worms.

and a review on Amazon that says

This is a novella-length puzzler well worth the time of anyone who enjoys impossible crimes. I’ve read my fair share of Carr, Halter, etc., and I found the situation baffling and the ultimate solution satisfying.

Essentially it’s a reimagining of John Dickson Carr’s The Hollow Man/The Three Coffins which someone who has read both Carr and Paul Halter found commendable — throwing around words like “baffling” and “satisfying” in that company is always going to get my attention.  And it is The Hollow Man retooled: the owner of a dry cleaning business is shot in his locked office by a man who is seen entering the building; when the door is broken in there’s no sign of the killer, a garden full of unmarked snow outside precluding an escape that way…and when the obvious suspect is tracked down, they themselves have also been murdered.  And you’re not going to tread such famous ground unless you’ve got something new to add…frankly, I was very curious to see what Read was going to bring to this.

Let’s get some ancillary issues out of the way first, though, because this exhibits many problems that stymie a lot of self-published fiction.  Firstly the formatting is awful, just so unforgivably bad — indents at the start of paragraphs vary in size (and indeed presence), punctuation comes and goes, random words are italicised without any particular meaning, like:

After Milek had installed the tablet’s software application, the Professor gathered up his new toys and made his way back to his office.

Also, Read has no idea how ellipses work:

‘Right, I have Roger’s report on Patrick Devlin and …………Chief Inspector Martin’s report on Danny O’Connor’

That’s twelve dots!  Twelve!  And it’s not the only instance of seemingly throwing in a huge pause for no reason.  It’s honestly a deeply baffling experience reading this, made even weirder by the separate crediting of an editor on the title page — frankly, I hope she didn’t charge for her services.  Additionally, characters are indistinguishable and the lumpy writing has instances where, despite living and working in Cambridge, there’s this dialogue:

‘Jesus with all these comings and goings, it is like Piccadilly Circus at rush-hour.’

which not only needs a comma after “Jesus” but also sits uneasily as it has characters from one city drawing an example from a completely different place.  Fine, London’s Piccadilly Circus is famously busy, but this reads like a London-based author setting his book elsewhere purely because; it’s akin to talking about a play in football by describing it in terms of cricket.  This is not a well-produced book by any measure, and highlights many of the perils of letting people have complete free reign over their own endeavours.

But, and here’s the thing, I was more than willing to happily forgive all of this for the simple reason that we’re going to get a new interpretation of The Hollow Man…and who doesn’t want that?!  If asked to choose one story to pull a Poisoned Chocolates Case on, The Hollow Man would doubtless be at the top of a lot of lists because it’s such a brilliant baffler and — while not the best example of the form — the archetype on which most of everything post-1935 was trying to build.  It’s a totemic piece of work, and someone bringing any new wrinkle to it is to be celebrated in my eyes.

Imagine my disappointment, then — nay, my frank bewildered, aghast astonishment — when this turns out to simply be The Hollow Man.  The plot of The Third Gunman effectively runs thus: man is confronted by someone from his past, goes to kill that person while giving the impression he is in his office, gets shot in the act of killing them, returns to his office under the guise of the person he has just killed, sets off a gunshot to make it appear that he’s just been shot after locking himself in his office, and dies of his wounds as people break in to discover him.  This is the plot of The Hollow Man, without even so much as a meaningful deviation to make it surprisingly clever.

Seriously, it’s copyright infringement writ large, and if any professional publisher touched this they’d be hit with some kind of legal suit.  But the thing I find hardest to understand is why Knight even bothered — he hasn’t given a clever alternative interpretation, and one aspect of his plot seems to be there only to make it seem like an impossible crime.  See, there’s no need for that gunshot fired by Devlin upon his return, it explains nothing in the way of misdirection like Grimaud’s did in The Hollow Man; take it out and you have an exceptionally dull mystery of a man who was shot elsewhere and then locked himself in a room before dying.  No aspect of Devlin’s plan accounts for the ‘escape’ of his killer…it’s so very, very stupid.

SPOILERS FOR THE HOLLOW MAN END

Read does at least try to work in a false solution, but this is dismissed for no reason other than he doesn’t want that to be the answer.  There’s a very intriguing situation where that false solution could actually contribute towards a more interesting actual solution, but when the chief suspect is asked about the key piece of evidence they give a brief explanation which is accepted without question and the whole thing is dropped from thereon.  It doesn’t occur to anyone that they could be, like, lying, perhaps?  Apparently not, and so that gets kicked aside and the ashes of John Dickson Carr raked over to thoroughly uninspiring effect.

The idea of The Hollow Man can be expanded on — I know it’s not a popular opinion, but I feel that Paul Halter did it honestly very well indeed with The Lord of Misrule — and the updating of this to (as far as I could tell) a contemporary setting raises the potential to reinvest this situation with new technology that wasn’t available to Carr and so update the workings in light of such advances.  In fact, if anything this raises one of the bigger issues I have with The Hollow Man and makes it even bigger in this milieu but simply doesn’t address it, namely [SPOILERS AGAIN] how can a man be shot in the stomach and walk such a long way without leaving any trail of blood? [END SPOILERS]  That seems like a more pertinent question in this age of forensic science, and the fact that it was ignored made me think that, since it’s not mentioned, it didn’t happen and so therefore there was a new explanation coming.  Faint hope, it turns out.

So if you’ve skipped to the end to find out what I think of this, here’s a summary: it’s awful, avoid at all costs.  For murderers vanishing without leaving tell-tale footprints in snow or mud read The Hollow Man, read The Lord of Misrule, read the wonderful Whistle Up the Devil by Derek Smith. Give your time and money to people who have worked to deserve it, and shy away for derivative and lazy enterprises such as this.  Add it to the overwhelming majority mentioned above and move one; there’s more good stuff out there, however, and I intend to find it.

So, how was my holiday reading?  Well, I read this on the plane, so it’s fair to say it got better…on which perhaps more in a few days. 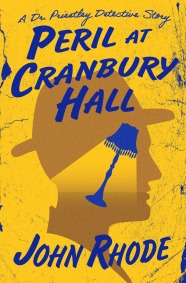 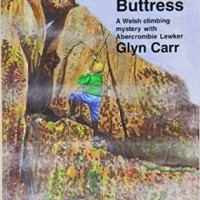