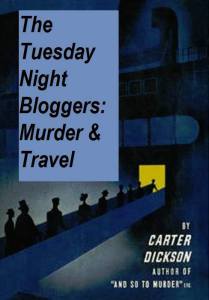 This week, for my actual final post for the Tuesday Night Bloggers on the subject of travel (I was, er, premature in predicting the number of days in May last week…), I was going to look at another book entirely.  But in reading The Sharkskin Book by Harry Stephen Keeler – chief loon of the sanatorium that is Ramble House – I was struck by something rather more nebulous that I’m going to try to explore here: the sense of dislocation one can experience when separated from familiar trappings.

The Sharkskin Book is composed of three separate stories, and it’s the first two I want to look at – the first starts with Ogden Farlow under arrest for murder and being subjected to a ‘third degree’ interrogation by three police officers: one American, one Italian and one German.  It’s possible I missed the reason for this smorgasbord of nationalities, but it’s the use of phonetic speech across these accents that got me thinking along the lines I’m hoping to explore.  Like Jim Thompson, Keeler uses speech above action as an insight into character:

“[H]e asked him who you both were.  But particularly – the dame.  And van Dervepen was just drunk enough to tell him that you were some guy he lived with, and the dame was a burlycue or some goddamn kind of a teaser dancer…”

It’s true that our Italian and German friends aren’t portrayed quite so…carefully, but the bewilderment felt by Farlow is exploited perfectly by the phonetic nature of their speech:

What this leads on to is the second story thread concerning Joe Long-Buffalo who (and this is early enough not to count as a spoiler) far from being a dam’ smart creem’nal lawyer is in fact a Native American who comes to Chicago for reasons of his own.  And this is where the notion of travel kicks in – Keeler has prepared you for the sense of the given protagonist feeling separated from his surroundings with Farlow and his police escort, but now Joe is a man outside of what he knows from his first appearance of getting off a train surrounded by other travellers:

Occasionally one, looking back, held his gaze uncommonly long on Joe Long-Buffalo, and Joe wondered whether it was because he was an Indian, with high cheekbones and copper-colored skin, or whether it was because of that confounded green-striped mail-order suit which fit him far too tightly, his too-loud checkered hickory shirt, and his wide-brimmed – and entirely out of season – straw hat which, he knew now, with his too long black hair, branded him as a hick from the country – a thing which, in sooth, he admitted himself to be!

What we get through Joe is a view of Chicago where he is the reader’s avatar and everybody else is foreign.  Joe’s speech is written in the same standard English as I am writing this sentence, and it’s the people he encounters – those on home turf, so to speak – who are presented through idiomiatic speech, literal lingual representation, and, tellingly, a fascination with Joe as the foreign element.  Not for Keeler the hick being overwhelmed by the Big City and its Ways, but equally he doesn’t simply flip the expected dynamic on its head by having Joe be the civil one and everyone else the Big City Hick:

“I would judge,” said Joe politely, “from your – er speech – that you were a newcomer like myself?”

“Oh, that’s on’y caze I talk that thar Big River dialec’, boy.  I come hyar f’m mebbe hund’ed miles west o’ Big River – not so durned fur from Memphis, in fac’ – but we’uns of Big River never lose out speechin’s – and they ain’t never nobody ever could put our speechin’s in a book or imytate us.”

It’s a truth long-established that Western society as a whole was slow to react to the differentness of other cultures and, particularly in print, this has led to the portrayal of people and attitudes that are somewhat regrettable – I’ve touched on some of that here, however, and don’t wish to explore it further in this post.  I mention it precisely becasue what Keeler is doing here is self-consciously reversing that portrayal – this is America through someone else’s eyes, the familiar made almost dreamlike not in the sense of desirability but rather in the presentation of one person’s everyday as foreign and just out of reach in terms of comprehension to someone else.  Inevitably that person needs to be an outsider, a traveller in distant lands, so that the sense of removal is heightened – Robert A. Heinlein’s exploration of this idea in an SF conext, Stranger in a Strange Land, will of course jump to mind for many of you – but inside of that there’s still the chance to see them as a figure of fun (hmmm, the best analog I can come up with here is Crocodile Dundee…).

Keeler here treads this line very well, with no side of all this foreigness more ‘right’ than any other, but it’s interesting that his portrayal of American G-men and heavies is probably as easily sterotypical as the “yessa, boss” subservient black characters that we all wince when reading these days.  In essence what we’re given here is a culture clash without the clash, where everyone and everything can be unfamiliar depending on the viewpoint taken – the conversation Joe has with the taxi driver about Native American women is fraught with potential for raised hackles in these more febrile times, but actually comes across as a genuine kind of cultural exchange on both sides.  This presents travel as the enriching experience it should be, with everyone capable of giving as much as they take, and I think I’ll bow out on that lovely positive point and leave you to contemplate a world where, 75 years later, this still isn’t really happening…

Wow, who knew I was so deep?

I’m also submitting this for the Golden Age Vintage Cover Scavenger Hunt at My Reader’s Block under the category Library or a Book.

12 thoughts on “#93: The Tuesday Night Bloggers – America from the Outside: The Traveller’s Perspective in The Sharkskin Book (1941) by Harry Stephen Keeler”